You Are Here: Home » Editors' Choice » Caribbean states beg Trump to grasp climate change threat: ‘War has come to us’ 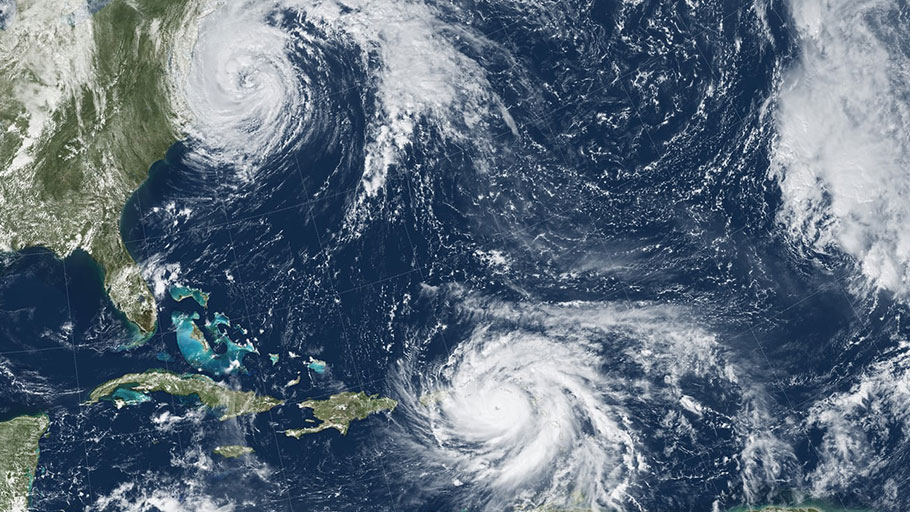 Hurricanes Katia (left), Irma (center) and Jose (right) in September 2017 – the first time on record that three major hurricanes made landfall at the same time in the Caribbean. Photograph: GOES-13 and MODIS/NASA/NOAA

As warming temperatures caused by climate change is strengthening hurricanes, leaders in the region plead with Trump to rejoin the Paris climate deal.

By Oliver Milman, The Guardian —

Caribbean states and territories have rounded on the Trump administration for dismantling the US’s response to climate change, warning that greenhouse gas emissions must be sharply cut to avoid hurricanes and sea level rise threatening the future of their island idylls.

The onset of this year’s hurricane season has seen leaders in the region tell the Guardian that Donald Trump needs to grasp the existential threat they face. Rising temperatures and increased precipitation caused by climate change is strengthening hurricanes, researchers have found, even as the overall number of storms remains steady.

“In 2017 we saw some of the most devastating and destructive hurricanes we’ve seen in our history,” said Selwin Hart, Barbados’ ambassador to the US. “This needs to be recognized.

“This isn’t some scientific debate, it’s a reality with loss of life implications. We need the US to be back at the table and engage. It’s imperative. We wouldn’t have a Paris climate agreement without the US and we need them back now.”

Hurricane Irma strengthened to a category five hurricane before slamming into the Caribbean and US in September, causing more than 130 deaths in places such as Barbuda, Saint Martin, Barbados and the US. This storm was swiftly followed by Hurricane Maria, which obliterated much of Dominica and caused a widespread, ongoing disaster in Puerto Rico, leaving thousands dead. 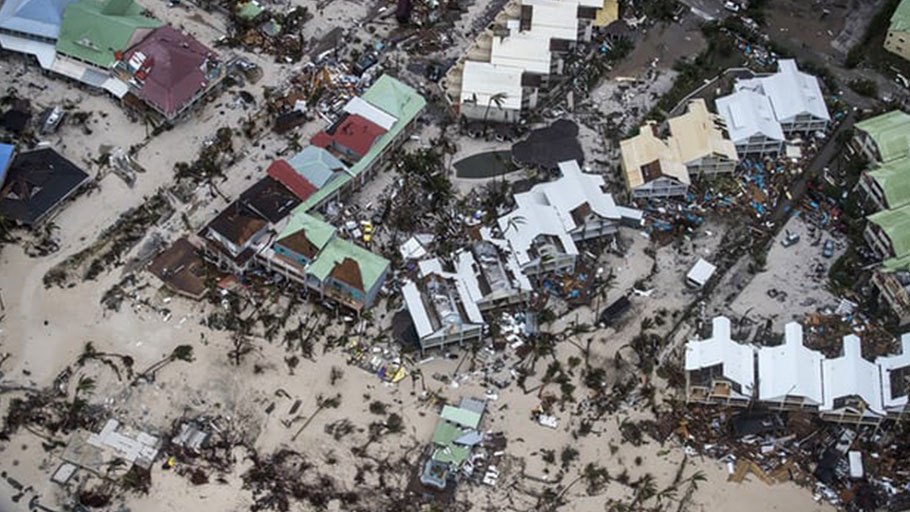 Saint Martin after Hurricane Irma. The storm strengthened to a category five and slammed into the Caribbean and US, causing more than 130 deaths in places such as Barbuda, Saint Martin, Barbados and the US. Photograph: Gerben van Es/AP

“Even before the passage of hurricanes Irma and Maria, we could already see the effects of coastal erosion, and even the loss of some islands,” said Ricardo Rosselló, governor of Puerto Rico. The US territory is part of an alliance with several states, including New York and California, that have committed to addressing climate change absent the federal government.

“Puerto Rico remains in a more vulnerable situation than other states. It is expected that some of the initial effects of climate change will be seen in Puerto Rico,” said Rosselló, who called Trump’s climate policies “a mistake”.

During the 2015 Paris climate talks, Caribbean nations were among the loose coalition of low-lying countries that successfully pushed the international community to aim to limit the global temperature rise to 1.5C (2.7F) beyond pre-industrial levels.

This aspiration, which would provide many island states the hope of remaining viable in the face of sea level rise, drought and powerful storms, is currently far from likely, with a recent UN report warning the picture would be “even bleaker” if the Trump administration follows through with its vow to remove the US from the Paris deal.

The withdrawal from Paris would take three years, but in the meantime the Trump administration is working to dismantle the clean power plan, an Obama-era strategy to cut carbon dioxide, delay new vehicle emissions standards, open up new land and ocean to oil and gas drilling and even put in place a set of subsidies that would prop up the ailing coal industry.

“The US is a major player in the world and it needs to lead, we depend on it to be a moral voice on issues where people are vulnerable,” said Darren Henfield, foreign minister of the Bahamas. “We really hope the US readjusts its position. It seems there will be doubters until we start completely losing islands.”

Henfield said Bahamians have become “dramatically aware” of climate change following a series of hurricanes that have hit or brushed the archipelago in recent years. The country has attempted to accelerate its transition to renewable energy although it faces the conundrum of relying economically upon tourists, borne on huge cruise ships that emit large amounts of carbon dioxide.

“We are being forced to put up sea walls to push back the rising tides,” Henfield said. “We are very exposed and we could see the swallowing of the Bahamas by sea level rise. We don’t have much room for people, there’s nowhere for people to move. Climate change will exacerbate the issue of refugees.

“I don’t know what influences the mind of president Trump but the world will be negatively impacted by not dealing with climate change. We always talk to our neighbors in the north and part of our foreign policy is to sensitize them and the international community to the threat we face.” 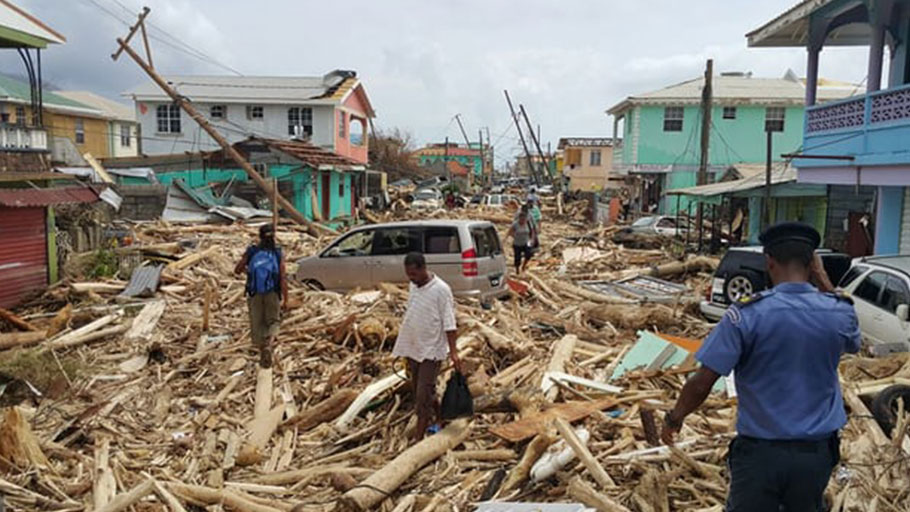 But while Caribbean states plead for climate assistance, particularly from the US, they are also looking at how to adapt to a new environment. The Organization of Eastern Caribbean States, a coalition of island countries that spread in an arc south of the British Virgin Islands, has turned its attention to looming challenges such as food security, coastal village relocation and new building designs in order to deal with rising temperatures and seas.

“Dominica was a real wake up call for us, it virtually got washed away” said Didacus Jules, director general of the OECS. “We know the impacts are going to be increasingly catastrophic and we need to plan for that. We need to do things completely differently in order to protect life and limb.”

Didacus said he was alarmed by the US reversal on climate change. “We are very disturbed by what is going on, it’s a matter we’ll deal with aggressively in terms of diplomacy,” he said. “We will work with other island nations to make ourselves heard.”

However, many in the Caribbean fear the window of time to avert the worst is rapidly closing. Roosevelt Skerrit, prime minister of Dominica, addressed the UN last September in strikingly bleak terms, describing himself as coming “straight from the front line of the war on climate change”.

“Heat is the fuel that takes ordinary storms – storms we could normally master in our sleep – and supercharges them into a devastating force,” Skerrit said. “Now, thousands of storms form on a breeze in the mid-Atlantic and line up to pound us with maximum force and fury. We as a country and as a region did not start this war against nature. We did not provoke it. The war has come to us.”

Skerrit said the hurricane left Dominica with flattened homes, smashed water pipes, hospitals without power, wrecked schools and ruined crops. “The desolation is beyond imagination,” he said. “The stars have fallen. Eden is broken. We are shouldering the consequences of the actions of others.

“There is little time left for action. While the big countries talk, the small island nations suffer. We need action and we need it now.”