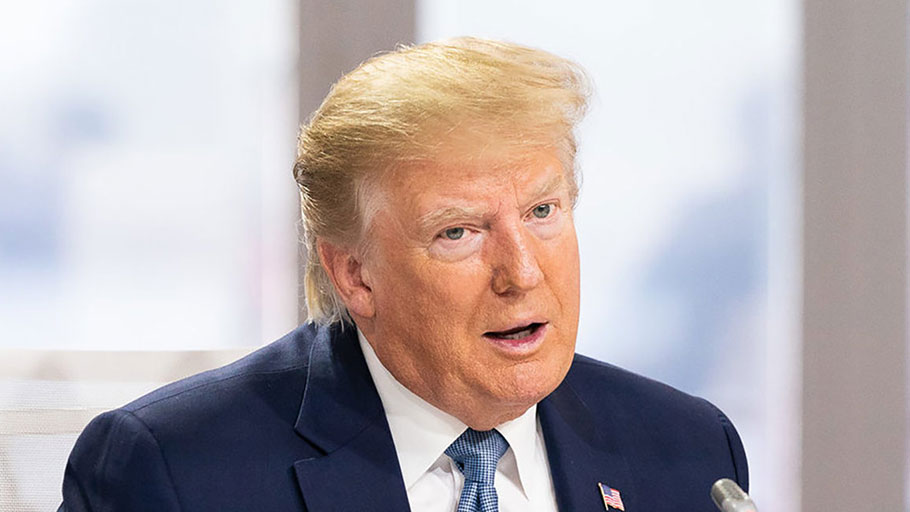 You Are Here: Home » Blog » Editors' Choice » Donald Trump the American fascist and authoritarian is no longer a hypothetical — it’s the here and now

Republicans have given Trump his crown. Sooner or later, they’ll regret it — but this crime can’t be undone.

Donald Trump’s show-trial impeachment and “acquittal” was much better in the original Russian or German.

Last Wednesday of last week all 53 Republicans in the United States Senate voted to acquit Donald Trump on the charge of obstruction of Congress. Despite overwhelming evidence — including Trump and his own minions’ public admissions — Sen. Mitt Romney of Utah was the only Republican to partly respect the Constitution and rule of law by voting to impeach Donald Trump for abuse of power. Senate Democrats, on the other hand, voted unanimously to convict Donald Trump on both counts.

In short, the Republican Party is more loyal to power than to the Constitution. Republicans all know that Trump was guilty as charged, and chose to acquit him anyway.

Writing at Mother Jones, David Corn describes the alternate reality of TrumpWorld and the Republican Party’s surrender to seductive lies:

A democracy can only effectively function on the basis of good information. If reality is not recognized and accepted, a nation cannot have the debates and discussions necessary for making the best decisions for its citizenry and the future. Authoritarians have long known that controlling the narrative is key to political control. The Trump impeachment trial was a test of the American system. Could the politicians in charge handle the truth, evaluate it fairly and reach a reality-based conclusion (which could still allow for a vote not to remove Trump)? The Republicans failed. Instead, they rallied for Trump; they renounced reality.

Their action was in synch with how George Orwell in 1984 described the most important need of an authoritarian political party: “The party told you to reject the evidence of your eyes and ears. It was their final, most essential command.” That was the GOP playbook for the Trump impeachment. This trial was a measure of whether truth could triumph over political hackery and the authoritarian impulse that Trump has injected into the Republican Party, and the Republicans have convicted themselves.

Beyond the immediate question of Trump’s obvious guilt and crimes, his impeachment and the spectacle surrounding it, marked the horrific moment when he was crowned an American king. Trump the American fascist and authoritarian is no longer a hypothetical — it is the here and now.

During Trump’s impeachment trial in the Senate, Alan Dershowitz, one of his attorneys, argued that Donald Trump is a de facto king and thereby above the law: “If a president did something that he believes will help him get elected, in the public interest, that cannot be the kind of quid pro quo that results in impeachment.”

As always, history does not repeat but it does rhyme. Dershowitz proclaimed Donald Trump to be a king or an emperor on Jan. 29. On Jan. 30 in 1933, Adolf Hitler, leader of the Nazi Party, was made chancellor of Germany, ending that country’s democracy.

Dershowitz’s claim that Trump’s personal interests and the country’s national interest are one and the same thing must now be viewed as legal precedent. The authoritarian presidency is now a practical matter of American politics.

Attorney General William Barr has further cemented his boss’ monarchical powers. Last Wednesday, Barr issued a mandate that no presidential candidates, their campaigns or senior staff are to be investigated without his personal approval. As a practical matter this means that Donald Trump is free to break the law at will — and that the Democratic Party’s candidates will be subjected to frivolous investigations and other forms of harassment.

Trump’s Republican servants have also promised to expunge his impeachment if and when they regain control of the House of Representatives in the future.

Here are some obligatory questions about the limits of Trump’s powers, if any can be said to exist.

If Donald Trump is indeed above the law, could he in fact shoot someone on Fifth Avenue and get away with it? The answer appears to be yes.

Could Donald Trump put political enemies such as Nancy Pelosi, Adam Schiff, Joe Biden and other Democrats in prison? Could he have such “enemies” tried for treason and executed – as he has repeatedly threatened to do?

Could Donald Trump imprison members of the news media — a group he disparages as “the enemy of the people” — because they dare to tell the truth about him?

Could Donald Trump round up and detain black and brown people because he deems them to be a “national security threat,” claiming he is acting in the “nation’s interest” by preventing them from voting against him in the presidential election?

Beyond publicly inviting foreign interference to help him win re-election, could Trump simply decide to suspend the 2020 presidential election (and others as well) because it is in “the nation’s interest” to do so? With their repeated lying about “voter fraud” and the Democrats “rigging elections,” Trump and his allies have repeatedly previewed such an outcome.

Some may think these scenarios are fantastic or absurd. Such an assumption is part of how authoritarians, fascists and other demagogues seize power over a society, and then expand it. Such a political force injects its poison through a process of shock and then normalization. Most people adjust to the new rules and subsequent reality.

Ascendant authoritarianism, especially in a failing democracy such as ours, involves transforming a country’s cultural norms and expectations about political behavior and political institutions. As such, American fascism in the Age of Trump is not just a story of failing political institutions, extreme political polarization, negative partisanship and “democratic backsliding.” Instead, it is a story about how an entire political culture is being negatively impacted andadapted to fit Trump and his movement’s goals and vision.

Much of the early handwringing focused on whether the United States could ever transition from a democratic republic to an authoritarian regime. It downplayed the degree to which authoritarianism is not just a political system but a type of political behavior that can happen in democratic systems as well. Commentators also missed that authoritarianism is increasingly global: The U.S. hasn’t gone from being a “free” to a “not free” country so much as the distinction between those has blurred….

A useful framework for our current moment is suggested by the Dutch political scientist Marlies Glasius, who proposes that we devote less attention to identifying authoritarian regimes and more on authoritarian practices. Freely elected leaders like Rodrigo Duterte, Narendra Modi, and Donald Trump are not “authoritarian” in the same way as leaders of China, Saudi Arabia, or Russia, where opposition groups are barred and elections are either fraudulent or nonexistent. But that doesn’t mean that they can’t take authoritarian actions. …

Glasius defines authoritarian practices as “actions … sabotaging accountability to people over whom a political actor exerts control, or their representatives, by disabling their access to information and/or disabling their voice.” They enable domination and subvert the channels by which people are supposed to be able to make their preferences heard in a democratic society. Subverting the justice system to selectively investigate a government rival is just such a practice.”

The 2020 presidential election will not be free, fair, open and transparent. Donald Trump and his party – aided by hostile foreign countries – will once again seek to usurp the will of the American people. The desired result will be Donald Trump’s coronation as an American king for a second time. That precedent having been set, Trump will not be impeached or otherwise removed from office for those crimes or any others he may commit. Based on his own threats and pronouncements, as well as the cult worship of his supporters and mouthpieces, Trump may become president for life.

The Republican Party, along with the larger global right-wing movement of which it is a part, will celebrate such an outcome. They will have seized complete control over America’s government. Multiracial democracy — which the Republican Party and the global right view as an existential threat – will have been contained, and perhaps even wholly destroyed. overturned. The commons and the social safety net will be shredded. Gangster capitalists will be fully empowered, with few if any restraints on their destructive behavior. America will more fully become a Christian fascist theocracy. The civil and human rights of nonwhite people, Muslims, women, gays and lesbians, the disabled, progressives, leftists and other groups Trump and his movement slur as “un-American” will be further trampled upon and ground down.

Trump’s allies, servants and followers should celebrate their victory while it lasts. Authoritarian leaders like Donald Trump almost always turn on their supporters eventually.

Republicans have given Donald Trump almost unlimited power. But in doing so, they also given Trump a weapon that he will ultimately and inevitably turn against them and his other supporters and cult members. That moment may not come soon, but it will be poetic justice when it does — for whoever may be here to witness it.

This article was originally published by Salon.

Chauncey DeVega is a politics staff writer for Salon. His essays can also be found at Chaunceydevega.com. He also hosts a weekly podcast, The Chauncey DeVega Show. Chauncey can be followed on Twitter and Facebook.