Thirty-nine people were arrested at the Georgia state capitol in Atlanta Tuesday as a coalition of organizations under the “Moral Mondays” banner urged state legislators to allow Gov. Nathan Deal (R) to expand Medicaid under the Affordable Care Act.

A bill under consideration by the Georgia state Senate on Tuesday aimed to reinforce the state’s rejection of the Medicaid expansion. According to The New York Times, just as the session started, five people in the Senate gallery shouted and unfurled a banner that read “Medicaid expansion now!”

Georgia’s Moral Monday is one of several state coalitions that have formed since the Moral Monday movement in North Carolina, which began holding regular protests and rallies in Raleigh in April 2013. The North Carolina coalition began protesting legislation curtailing reproductive rights, cutting taxes and funding for public education and allowing long-term unemployment insurance benefits to expire, among other issues.

An Atlanta reporter tweeted a picture of those protesting in the Senate gallery. 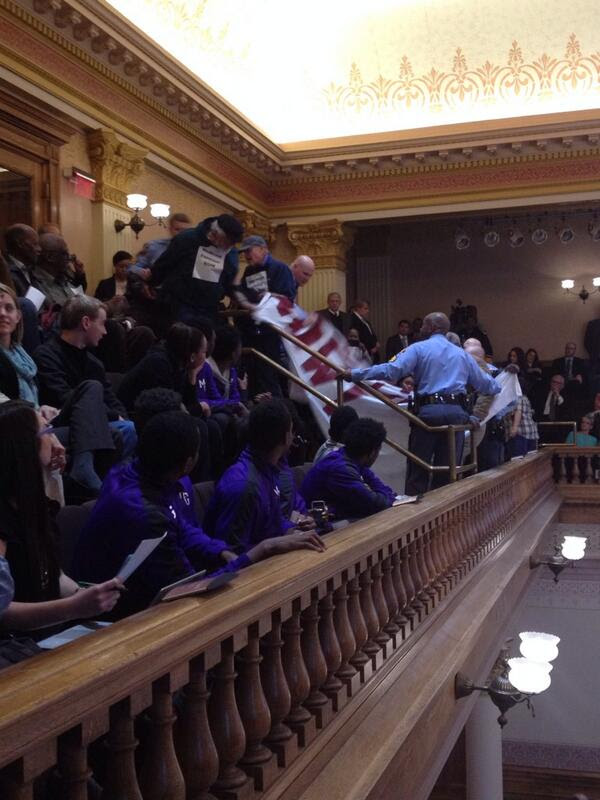 “Today was an historic day under the gold dome, as hundreds of Georgians took action to mark the 39th day of a legislative session that has seen unprecedented attacks on hard working Georgians,” Michael McGovern, a spokesman for Faith in Public Life, which works with Moral Monday Georgia, wrote in a statement to HuffPost. “Fed up with a list of bad legislation — from blocking Medicaid expansion (leaving 650,000 people without access to healthcare), to restricting women’s right to choose (even in the case of rape or incest), or expanding Stand Your Ground and allowing guns to be carried in bars, churches, and even schools.”

The Rev. Raphael Warnock of Ebenezer Baptist Church, where Martin Luther King Jr. was baptized and served as a pastor, was arrested as he participated in a sit-in outside the governor’s office.

The group hoped to disrupt the state legislators on the second-to-last day of the legislative session.

“They were old, young, black, white, gay and straight,” Franzen told HuffPost Tuesday. “Nothing like this has ever happened inside the golden dome. We definitely had a policy impact because [the state legislators] now have a packed schedule, this will impede their ability to get through all this legislation.”

Franzen added that there was a “seriousness” to the acts of civil disobedience.

“There were elderly people, some of whom have fallen through the gaps, are uninsured, are dealing with chronic illnesses, chanting ‘our lives matter.’ The tone felt like it would be morally inappropriate to do anything but” expand Medicaid in the state.

“Everybody has a right to be heard,” state Sen. Judson Hill (R-Ga.) told The New York Times. “But they should consider the wisdom of protesting inside the chambers, which delays us getting to other legislation that is important to other constituents.”

The group planned a “solidarity” event Tuesday evening at the Fulton County jail in Atlanta, where the 39 protesters were held.

Franzen told HuffPost that the coalition is “evaluating” whether to participate in acts of civil disobedience during the legislature’s last day on Thursday.