Fidel Castro: ‘Oswald Could Not Have Been the One Who Killed Kennedy’

You Are Here: Home » Blog » Editors' Choice » Fidel Castro: ‘Oswald Could Not Have Been the One Who Killed Kennedy’ 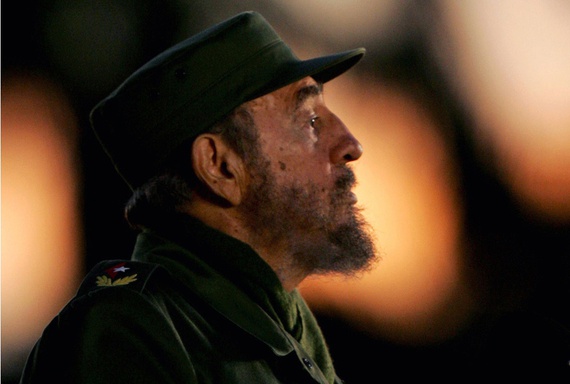 Castro says Cuban officials recreated the circumstances of Kennedy’s shooting after the assassination. “It wasn’t possible for one man to do,” he says. (Claudia Daut/Reuters)

Fidel Castro shares at least one belief with the majority of Americans: He is convinced that the assassination of President John F. Kennedy was not the work of a lone gunman, but was the culmination of a broad conspiracy. According to a recent Gallup poll, 61 percent of Americans believe Lee Harvey Oswald did not act alone in Dallas 50 years ago. But Castro suspects that Oswald might not have been involved in the assassination at all. Here is what he told me–to my great surprise–over lunch one day in Havana: “I have reached the conclusion that Oswald could not have been the one who killed Kennedy.” Castro is of course a confident man, but he said this with a degree of surety that was noteworthy.

I was visiting Havana three years ago at Castro’s invitation. I had just written a cover story for The Atlantic about Israel’s threat to strike militarily at Iran’s nuclear facilities. Castro read the article, and sent me a message through the Cuban Interest Section in Washington: He would like me to come to Cuba as soon as possible in order to discuss my findings with him. I obliged.

Kennedy was only a peripheral subject of our discussions. Castro, I found, was preoccupied with the threat of nuclear war and proliferation, as one would expect him to be: He was one of the three key players in an episode, the Cuban missile crisis of 1962, that nearly brought about the destruction of the planet. John F. Kennedy was his adversary; Nikita Khrushchev, the Soviet premier, was his patron. At one point, I mentioned to him the letter he wrote to Khrushchev, at the height of the crisis, in which he asked the Soviets to consider launching a nuclear strike against the U.S. if the Americans attacked Cuba. “That would be the time to think about liquidating such a danger forever through a legal right of self-defense,” he wrote. In Havana, I asked him,  “At a certain point it seemed logical for you to recommend that the Soviets bomb the U.S. Does what you recommended still seem logical now?” He answered: “After I’ve seen what I’ve seen, and knowing what I know now, it wasn’t worth it all.” I expressed relief that Khrushchev ignored his request.

Castro was also deeply concerned about the level of anti-Semitic rhetoric emanating from Tehran, and wanted to communicate his displeasure to then-president of Iran, Mahmoud Ahmadinejad, through an intermediary. (I wrote about Fidel’s views of Iran and Israel here).

Jeffrey Goldberg, Celia Guevara, and Fidel Castro at a

I brought with me on this trip a friend named Julia Sweig, who is a preeminent expert on Cuba at the Council on Foreign Relations. Julia and I wound up spending the better part of a week with Fidel. (You can read about our trip to watch a dolphin show at the Havana aquarium with Fidel and Che Guevara’s daughter here.) By the time of our meetings with Fidel, he was recovering from a serious illness, and he was already semi-retired. His brother, Raul, was running the country, although I was under the clear impression that nothing important happened in Havana without the assent of Raul’s older brother.

One afternoon, after a marathon interview session, we gathered for lunch—Castro, his wife, Dalia, his son Antonio, a couple of aides, Julia, a translator, and myself—and an expansive Castro told stories of the early days of the revolution, and entertained a series of random questions from us. I knew, from Julia, who has studied Castro for years, that J.F.K was seldom too far from his thoughts, but our discussion of U.S. policy actually began with other presidents. Castro spoke about a biography of Lincoln he had just read.

“Is Lincoln the most interesting American to you?” I asked.

“No,” he said, “but much more than Washington.”

“Much more than Kennedy?” I asked.

“Yes,” he said, but unconvincingly. “Kennedy made many mistakes. He was young and dramatic.” Fidel reserved his animus mainly for Robert Kennedy, who was attorney general in his brother’s administration and loathed Fidel and his revolution. It was Robert Kennedy, Fidel believes, who was behind U.S. plots to have him assassinated. But he blames J.F.K. for the invasion, by a ragtag Cuban exile army, of the Bay of Pigs. “Kennedy was humiliated by his defeat at the Bay of Pigs, but all that we did was to protect ourselves.”

Then Castro began talking about J.F.K.’s assassination. “It is a very sad story,” he said. “It was a very sad day when it happened.” He said he remembered the moment he heard of the shooting. “I won’t forget it. As soon as we heard, we all rushed to the radio to listen.”

Self-preservation was also on his mind in the days after the assassination. He understood, he said, that he would be blamed for J.F.K.’s death, especially after it was learned that Oswald had vociferously opposed American policy toward Castro’s Cuba. Castro tried hard to communicate to the Americans that he had nothing to do with J.F.K.’s death, and as Philip Shenon reports in his new book, A Cruel and Shocking Act: The Secret History of the Kennedy Assassination, Fidel even arranged to be interviewed by a Warren Commission staffer on a yacht in the water off Cuba. “Immediately after the assassination, Castro very justifiably worried that he would be blamed, and he was worried that if he were blamed, there would be an American invasion of Cuba,” Shenon told me. But Castro’s denials were credible, Shenon said. Despite the many arguments advanced by conspiracy theorists, he said, “there is no credible evidence that Castro was involved personally in ordering the assassination.”

Whether Fidel’s agents or sympathizers encouraged Oswald, on a visit to Mexico, to assassinate J.F.K., is another question, one that Shenon explores in his book. “My question is whether people thinking that they were acting in Castro’s best interest might have provided the motivation,” he said. The second question: Whether Oswald believed that killing Kennedy was what Fidel Castro wanted him to do. “In September of 1963, Castro gives an interview to the AP in Havana in which he seems to suggest that Kennedy’s life is at risk: ‘I know the Americans are trying to kill me and if this continues there will be retribution,’ was the message,” Shenon said. “This report runs in the New Orleans Times-Picayune, and Oswald reads the Times-Picayune avidly. Perhaps Oswald said, ‘Ah ha, I’m going to kill Kennedy.’”

The story that “one man killed Kennedy in his car with a rifle,” Fidel said, “was manufactured to fool people.”

This is what might be called the Jodie Foster theory of the Kennedy assassination: Oswald sought to demonstrate his loyalty to the man he admired above all others, Fidel Castro, by killing the president.

Fidel told us at lunch—as he would—that none of his associates or officials had anything to do with the assassination, and that the Cuban embassy in Mexico City, which Oswald had visited, denied him permission to visit Cuba, fearing that he was a provocateur.

I asked Fidel why he thought Oswald could not have acted alone. He proceeded to tell the table a long and discursive story about an experiment he staged, after the assassination, to see if it were possible for a sniper to shoot Kennedy in the manner the assassination was alleged to have happened. “We had trained our people in the mountains during the war”—the Cuban revolution—“on these kind of telescopic sites. So we knew about this kind of shooting. We tried to recreate the circumstances of this shooting, but it wasn’t possible for one man to do. The news I had received is that one man killed Kennedy in his car with a rifle, but I deducted that this story was manufactured to fool people.”

He said his suspicions grew especially pronounced after Oswald was killed. “There was the story of Jack Ruby, who was said to be so moved by the death of Kennedy that he decided to shoot Oswald on his own. That was just unbelievable to us.”

I then asked Castro to tell us what he believes actually happened. I brought up the name of his friend, Oliver Stone, who suggested that it was the CIA and a group of anti-Castro Cubans (I used the term “anti-you Cubans” to describe these forces aligned against Castro) that plotted the assassination.

“Quite possibly,” he said. “This is quite possibly so. There were people in the American government who thought Kennedy was a traitor because he didn’t invade Cuba when he had the chance, when they were asking him. He was never forgiven for that.”

“No doubt about it,” Fidel answered.

We talked a bit more about Kennedy and his legacy. He told us about his many subsequent contacts with members of Kennedy’s family, including with Maria Shriver. “She’s the one who married Schwarzenegger,” he said. “The world is a very small place.”

We turned to other subjects, but Fidel came back to Kennedy once more, the next day, when he said to me, apropos of nothing, “Kennedy was very young.”

I later asked Julia Sweig what this might have meant. For Castro, she said, Kennedy may forever stand for something out of reach. “He’ll never know what would have happened had J.F.K. lived. He may have reserved for Kennedy in his own mind the possibility of greatness. It’s completely fascinating and frustrating to him.”