You Are Here: Home » Blog » Editors' Choice » Here’s The Real Reason Kaepernick Can’t Get A Job In The NFL 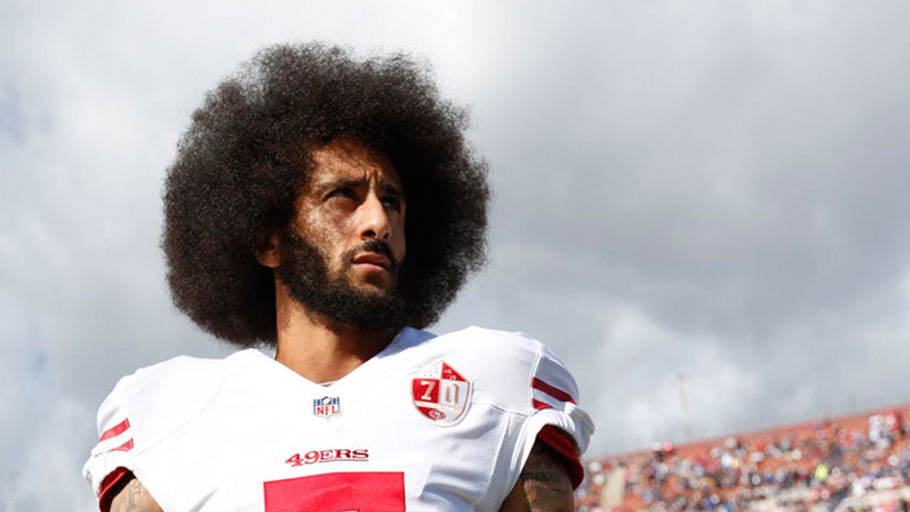 The NFL has the power to enforce their take it or leave it imperium on players, fans and politicians.

Forget all the little teases about this NFL team or that team signing Colin Kaepernick before the start of the season. Forget all the supposed informed talk about some team somewhere signing Kap out of desperation or because they’ve run out of Arena league QBs to go to. And most importantly, forget any notion that the NFL is so image conscious that it can be shamed into prodding some team to give Kap a shot.

It ain’t going to happen. It’s not because the NFL is inherently racist. Or, it’s simply so apoplectic at the thought of one guy taking a knee and somehow desecrating American patriotic values. Or, that Kap’s action was so threatening that it and he had to be banned in Boston in perpetuity. Or, even that the NFL just had to send a message to the other black players, don’t think about opening your yap to back Kap or heaven forbid speak out on those little prickly issues such as police abuse or racial discrimination.

The start and really end point to make sense out of why a guy who’s got relatively good stats, played on a championship team, and by all counts is a quiet, unassuming, consummate team player, is not just unemployed, but seemingly unemployable in the NFL is the NFL. Or, rather the structure of the NFL and who runs it.

The NFL is not, and never has been a democracy. It’s a quasi-militaristic, top down organization. It’s run by an entrenched elite core of billionaire owners who set the tone and determine policy for the league. They are called “key owners.” Some of them can trace their NFL family pedigree almost back to the founding of the NFL nearly a century ago. The names are familiar:

Art Rooney II of Pittsburgh (Daniel’s son), John K. Mara of the New York Giants and Clark Hunt of the Kansas City Chiefs. Their ranks have been beefed up in the past couple of decades by big dollar owners, namely Robert McNair in Houston, Jerry Richardson in Carolina, Jerry Jones in Dallas and Robert K. Kraft in New England. They are not young guys. They are not liberal or even moderate Democrats.

They are mostly conservative Republicans, some very outspoken Republicans. NY Jets owner, Woody Johnson, has been an unabashed bankroller and enabler for GOP presidential candidates. He served as national finance chairman for Jeb Bush’s presidential campaign. If they are GOP boosters, they are conservative; some like Johnson with his GOP presidential campaigning, an outspoken conservative. McNair is another example. He kicked in several thousand dollars to the campaign to repeal a ballot initiative in Houston that protected gays and lesbians from forms of discrimination. And Jones could demand that Cowboy players must stand, presumably at rapt attention, during the playing of the national anthem. So, it’s no surprise that 2012 GOP presidential candidate Mitt Romney could brag that some of his tight pals are NFL owners.

In a real sense, Kap is being held captive not to the racism or petty whims of NFL owners, although a healthy dose of that is likely there too. But to the NFL’s rigid, unbending and unyielding arrogance of power, insular structure and mindset that is virtually immune from any outside influence. This was evident in every challenge to the NFL elite, be it the threat of player strikes, contract negotiations, the dust up over CTE trauma and dangers, the criticism it gets for shaking down cities and states to put taxpayers on the hook for everything from luxury boxes to new stadiums. Then there’s Washington owner Dan Snyder’s nose thumb at anyone who tells him he has to drop the offensive “Redskins” moniker.

The NFL has the muscle to keep their books hush hush, demand the players play two more games, thus radically increasing the hazard, knock down every chance it gets to slash the player’s revenue take, and not guarantee any long-term health benefits to the players.

While the NFL doesn’t have the anti-trust exemption that MLB has, it hasn’t needed it to beat back the challenges. It has something even better. It has the deepest of deep pockets, the political shield of its GOP bent, and a massive fan base that’s second to none.

The fan base is no small point when it comes to trying to figure out why Kap is a pariah. The NFL’s fan loyalists don’t want him. They made that clear in everything from informal polls to loud protests and boos when he appeared in their town during last season. Those loyalists are not for the most part African-American, or Hispanic, they are blue collar, and conservative middle class, white football junkies who year in and year out, pack stadiums, and plop down tens of millions for tickets, and assorted NFL paraphernalia.

The NFL power brokers have the supreme dominance to enforce their take it or leave it imperium on the players, fans, and politicians. And that’s exactly why Kap doesn’t have an NFL job.

Earl Ofari Hutchinson is an author and political analyst. He is an associate editor of New America Media. His forthcoming book, The Trump Challenge to Black America (Middle Passage Press) will be released in August. He is a weekly co-host of the Al Sharpton Show on Radio One. He is the host of the weekly Hutchinson Report on KPFK 90.7 FM Los Angeles and the Pacifica Network.

Reviving the War on Drugs Will Further Damage Police-Community Relations

Reviving the War on Drugs Will Further Damage Police-Community Relations
We Need Your Support — Donate, Share, Sign-Up Ways to Support