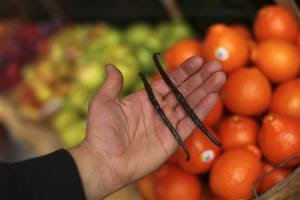 .
View photo
A man holds whole vanilla beans at a grocery market in San Francisco, California February 7, 2014. REUTERS/Robert …
By Verna Gates
BIRMINGHAM, Alabama (Reuters) – Entrepreneurs from one of the grittiest cities in the United States have joined forces with peasant farmers in Haiti to help transform the country’s bitter poverty into delicious and life-sustaining ice cream.
A white former human sexuality professor from Alabama and a black Baltimore gourmet ice cream maker are being recognized for their efforts to help Haitian farmers find a market for their high-value vanilla beans and cacao in a product they like to call “ice cream with a purpose.”
The unusual pair teamed up two years ago to market Haitian vanilla-flavored ice cream to upscale Baltimore area restaurants.
The Vanilla Project, which provides income for some 650 farmers in rural Haiti, on February 1 earned its creators the Citizen Diplomat Award from Global Ties U.S., a non-profit partner of the U.S. State Department.
The vanilla venture owes its origins to a chance encounter 14 years ago when Alabama mother and daughter Anne and Stephanie Reynolds befriended a Haitian street artist.
They decided on a lark to join the artist, Gracia Thelisma, on a bus trip to the north of Haiti to visit the mother he had not seen in years.
The mother-daughter duo was struck by Haiti’s beauty and its people – as well as its poverty.
After they returned to Alabama they collected clothes to send to Haiti and raised money to start a school in Thelisma’s home town of Plaisance.
That soon evolved into seeking a long-term solution to employ the children who graduated from the school.
“Haiti once exported some of the finest vanilla products to Paris. They can do it again,” said Anne Reynolds, 57, a former professor at Auburn University at Montgomery, Alabama.
Haiti is the poorest country in the Western Hemisphere, with a poverty rate of 77 percent and an average per capita income of $760, according to the World Bank.
After testing the plants in Haiti, and planting 70,000 vanilla vines, the project went into full business mode last year with the creation of the De La Sol Haiti company in Plaisance, a rural farming community of 65,000.
Stephanie Reynolds, 27, with a graduate degree in Latin American studies, runs the company, which has 8 employees, 5 women and 3 men from Plaisance.
While waiting for the vines to mature, De la Sol Haiti is turning cocoa bought from local producers into chocolate.
The company is training farmers in new techniques to grow the vanilla vines on cacao trees and Thelisma hopes vanilla exports could start next year. It takes up to five years for the vanilla plants, which are related to the orchid family, to reach maturity.
“My dream is for De la Sol to become a leading force for Plaisance development,” said Thelisma. “In the region, people do not have jobs. With the vanilla business De la Sol could be able to expand and benefit a larger part of the population,” he added.
Reynolds was looking for culinary partners when she got a call out of the blue from Baltimore ice cream maker Taharka Brothers.
Owned and operated by young, college-aged African-Americans from tough neighborhoods, Taharka, founded in 2010, was introduced to Haiti in 2012 through Global Ties U.S., which hosts international visitors sponsored by the U.S. Department of State.
Taharka’s marketing manager, Darius Wilmore, a former graphic artist with Def Jam Recordings, the hip hop label, was immediately struck with the idea of helping Haitian producers.
Wilmore Googled “vanilla in Haiti,” and found Reynolds.
She told him her vanilla beans were still two years away from maturity. In passing, Reynolds mentioned growing vanilla bean vines on cacao (chocolate) trees.
“What are you doing with the chocolate?” asked Wilmore.
While vanilla is the No. 1 flavor in the world, chocolate comes in a solid second.
Today, Taharka orders between 20 to 50 pounds of chocolate bi-monthly from De La Sol Haiti for its ice cream, which it delivers to 50 of Baltimore’s fanciest restaurants, grocery stores and ice cream shops. Wilmore hopes to see a profit next year, and start taking delivery of some Haitian vanilla beans.
Taharka Brothers joined Del La Sol Haiti in Washington, DC, this month to receive the Citizen Diplomat Award, adding their names to a list of luminaries such as U.S. Senator William Fulbright and celebrated poet-activist Maya Angelou.
Both Reynolds and Wilmore share a belief that the best way to help those less fortunate is through collaboration, and that giving creates dependency.
While Wilmore disapproves of handouts, he believes he owes the people of Haiti a debt of gratitude, because their bloody, decade-long revolution in the late 18th century began the end of slavery in the western world.
“It is race, class and history wrapped into this. Here we are, young black men, working with white women from Alabama, buying chocolate from poor Haitians. We are shining the light on social injustice through ice cream,” Wilmore said in his award acceptance speech.
He added: “Ice cream tastes better than poverty.”
(Additional reporting by Amelie Baron in Port-au-Prince; Writing and editing by David Adams; Editing by Dan Grebler)
Love0 Share Tweet Share