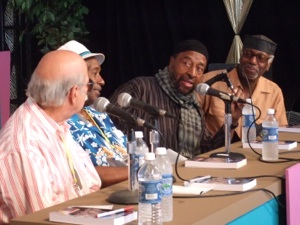 At the close of his autobiography, Yusef A. Lateef, the renowned musician, composer, and Grammy-winning recording artist wrote, “My life has been a series of ‘warm receptions,’ and, after a while, it becomes difficult to separate them, to determine which was most rewarding and heartwarming.”  Lateef’s thousands of admirers will ponder now about which of his concerts and recordings were most rewarding for them in his highly productive life.  Lateef, 93, died Monday morning at his home in Amherst, Massachusetts.

Lateef, a versatile artist of global influence, made his transition peacefully, according to his wife, Ayesha Lateef.

“My dear husband was himself an extension of warmth and love towards others,” his wife said. “He saw every human being with the utmost value and respect. He approached all of us as he did his music, with enthusiasm, imagination and longevity.”

While Lateef chose to define his music as autophysiopsychic, that is, “music from one’s physical, mental and spiritual self,” his critics and fans heard him as the embodiment of jazz and the blues, and that expressive quality, however termed, placed him among the finest performers and composers of his generation.

Born William Emmanuel Huddleston on Oct. 9, 1920 in Chattanooga, Tenn., he moved with his family to Detroit in 1925, settling in the heart of the city’s storied Paradise Valley.   It was about this time that his father—for an unknown reason—changed their surname to Evans.

Paradise Valley was basically the entertainment enclave of “Black Bottom,” where the city’s black population was centered, and where William Evans (he changed his name to Yusef Lateef in 1948 and became a member of the Ahmadiyya Muslim Community and for the rest of his life he remained a devout Ahmadi Muslim fulfilling requirements including the lesser and greater pilgrimage to Mecca) was immersed in a vibrant culture where a profusion of music was part of the daily routine.

At Miller High School, he fell under the tutelage of John Cabrera and joined such illustrious future jazz immortals as Milt Jackson.  But it was a local saxophonist, Lorenzo Lawson, who most impressed and influenced him to set aside the oboe and drums and focus on the tenor saxophone.

Soon, he was so proficient that he had the first chair in Matthew Rucker’s Band, and given the band’s prominence, Lateef’s reputation reached across the city and all the way to Chicago where he was now a member of Lucky Millinder’s big band.  In 1948, along with his adoption of Islam, he joined the Dizzy Gillespie Orchestra, which included an array of world class musicians such as James Moody, J.J. Johnson, Ray Brown, Kenny Clarke, and the amazing Cuban conga drummer Chano Pozo.

By 1951, Lateef was back in Detroit with his first wife Sadie, a daughter Iqbal and a son Rasheed.  In no time at all he was back in the swing of things performing with a number of groups and at several of the top clubs in town.  Among the stellar leaders who requested his presence was guitarist Kenny Burrell.  When bassist Alvin Jackson, Milt’s brother, assembled a quartet, Lateef was featured on tenor saxophone and flute, which he had begun studying at the Larry Teal School of Music.  The group, including pianist Barry Harris and trombonist Kiane Zawadi (Bernard McKinney) was the house band at the Blue Bird Inn, a legendary jazz spot on Detroit’s Westside.

Lateef was fronting his own ensemble by 1954 and began a five-year stint at Klein’s Show Bar.   Now with a steady gig he had to relinquish his job at Chrysler.  With Hugh Lawson (and sometimes Terry Pollard) on piano; Curtis Fuller on trombone; Ernie Farrow on bass; and Louis Hayes on drums; for two years the band worked six nights a week and became one of the most popular groups in the city.  So popular, in fact, that jazz writers began to spread the word.  They were extended a contract by Ozzie Cadena, a producer at Savoy Records, and their first album was “Jazz Mood.”  A succession of albums would follow, alternately between Savoy and the Prestige labels, and it was during this phase that Lateef was able to introduce an assortment of unusual instruments normally heard in various ethnic cultures.

From a veritable academy of musicians who were in and out of his ensemble during the nights at Klein’s, Lateef sharpened his musical knowledge which was bolstered even further by the classes he took at Wayne State University.  But by 1959, he was ready for a new scene.  “I had done about all I could in the realm of music in Detroit,” he wrote.  “There was a scarcity of clubs during this period and to make ends meet I took a part-time job unloading banana trucks. Whether you were a writer, painter, or a musician, it wasn’t a good time to be in the city.”

The Big Apple was the only option for him and by the early sixties Lateef was a regular at jam sessions, recordings, and concert dates with such notables as John Coltrane, Charlie Mingus, percussionist Babatunde Olatunji, and numerous homeboys such as Lonnie Hillyer, Donald Byrd, and Sonny Red.  But Lateef’s stature grew exponentially during his tenure with Cannonball Adderley’s band, and it provided him with additional experience to form his own ensemble by 1965.

Holding a band together while attending the Manhattan School of Music was challenging, but Lateef was equal to the task, earning his master’s degree and continuing to record a phenomenal pace.  Under contract at Atlantic Records with producer Joel Dorn gave Lateef the latitude he needed to express the full extent of his artistry.  His “Gentle Giant,” recorded in 1971 was among his most memorable dates and featured bassist Bob Cunningham, drummer Tootie Heath, and pianist Kenny Barron.

Nothing was more eventful for him in the early seventies than his meeting and marriage to Tahira at Chicago State University.  Winning her hand and defending his dissertation were momentous occasions and the birth of his son, Yusef in 1975, completed a trifecta of jubilation.

From 1975 to 1980, Dr. Lateef studied in Africa, mainly in Nigeria where he undertook the mastery of the Fulani flute.  In addition to his research and teaching obligations, he was commissioned by the government to compose a symphony and to write a book based on his research.  Seeking new musical spheres after Africa, he embarked on a series of concert dates with Eternal Wind, an advanced group of younger musicians that included Charles Moore, Frederico Ramos, Ralph “Buzzy” Jones, and Adam Rudolph.   “Yusef was so open and accessible,” Rudolph recalled during a recent interview.  “There was always this love, peace and freedom about him.  And you could feel all of this through his music, which defined him in the same as Picasso’s art or Miles Davis’s music defined them.  We’re evolutionists, he would tell us and we have to keep on stepping.”

And stepping Dr. Lateef did, thanks to Eternal Wind and the tireless Rudolph.  Even so, there was time for teaching and composing, to say nothing of his other artistic ventures into writing and painting, and running his record and publishing company, FANA Music.

His beloved wife Tahira passed in 2009, Dr. Lateef later remarried  Ayesha, and his final days were as fruitful and productive as ever, and he leaves a remarkable legacy of cultural achievements.

“I daily and nightly thank Allah for continuing to bless me and to allow me to bring love, peace and joy to the world,” he wrote.  And that love, peace and joy resonates with all the conviction his formidable talent could command, and all we have to do is to listen to his music.

He is survived by wife Ayesha, his son also named Yusef Lateef, his grand-daughter Iqbal, and great grandchildren.