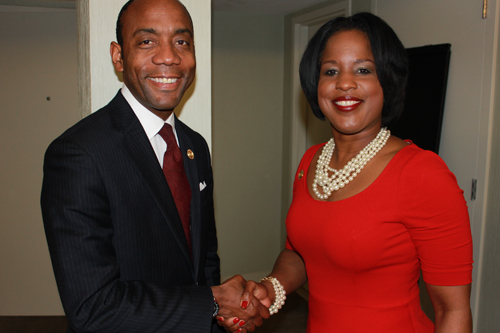 NAACPThe Board of Directors of the NAACP, the nation’s oldest civil rights organization, has elected Cornell William Brooks as its new president and CEO, succeeding interim president and CEO Lorraine C Miller.Brooks, a lawyer and human rights activist, is currently president and CEO of the New Jersey Institute for Social Justice, which is based in Newark. He is a native of Annadale, N.J. but will move to Washington, D.C., for his new job. The NAACP is based in Baltimore.“We are proud to welcome Attorney Cornell William Brooks as our new president and CEO,” said Roslyn M. Brock, chairman of the NAACP Board of Directors.“Mr. Brooks is a pioneering lawyer and civil rights leader, who brings a wealth of knowledge and experience to the Association. We look forward to leveraging his legal prowess, vision and leadership as we tackle pressing civil rights issues of the 21st century.”He is taking over at an embarrassing time for NAACP, which was founded in 1909 as the Niagara Movement by W.E.B. DuBois and William Monroe Trotter.Miller recently demanded the resignation of Leon Jenkins, president of the NAACP’s Los Angeles branch, after the branch planned to give a second Lifetime Achievement Award to Donald Sterling, owner of the Los Angeles Clippers. Sterling was recorded telling his African American and Mexican girlfriend that he did not want blacks attending Clippers’ games.The NAACP also is facing financial problems and will cut its staff by 7%.Miller replaced Benjamin Todd Jealous who resigned in 2013. She served as president and CEO until the NAACP found a new permanent leader. Brooks is the NAACP’s 18th president.The 53 year-old Brooks served as senior counsel for the Federal Communications Commission and was executive director of the Fair Housing Council of Greater Washington. He was also a trial attorney for the Lawyers’ Committee for Civil Rights Under Law.“I am deeply humbled and honored to be entrusted with the opportunity to lead this historic organization,” Brooks said. “In our fight to ensure voting rights, economic equality, health equity and end to racial discrimination for all people, there is much work to do.”Brooks, a graduate of Jackson State University, also earned a Master of Divinity from Boston University School of Theology. Yale Law School awarded him his law degree.  He is a fourth-generation minister.The board selected Brooks after reviewing more than 450 applications and meeting with 30 semifinalists.  He will be introduced to the NAACP membership in July at its 105th national convention in Las Vegas.