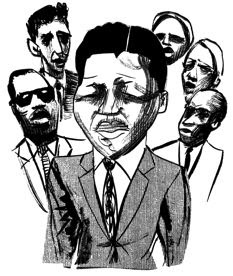 Nelson Mandela: The Stature of a Classical Hero

You Are Here: Home » Blog » Editors' Choice » Nelson Mandela: The Stature of a Classical Hero

At Robben Island Prison, a former leper colony and animal-quarantine station off Cape Town, Nelson Mandela—Prisoner 466/64—was kept by South Africa’s white-supremacist regime for eighteen years in an eight-foot-by-seven-foot cell. He was allowed to send one letter and to receive one letter every six months. On June 23, 1969, Mandela wrote to his daughters, Zenani, who was ten, and Zindziswa, who was eight. (Zeni and Zindzi, he called them.) “My darlings,” he began. “Once again our beloved Mummy has been arrested and now she and Daddy are away in jail.” Mandela was serving a life sentence for conspiring to overthrow the government by force as the leader of the armed wing of the African National Congress, and his then wife, Winnie, an A.N.C. activist, had just begun what would be a seventeen-month stint in Pretoria Central Prison, more than a year of it in solitary confinement.

Mandela, who had not seen their girls since Zeni was three and Zindzi was eighteen months old, could only offer them cold comfort as—covering both sides of a foolscap sheet in well-disciplined script—he imagined their motherless plight: “It may be many months or even years before you see her again. For long you may live like orphans without your own home and parents, without the natural love, affection and protection Mummy used to give you. Now you will get no birthday or Christmas parties, no presents or new dresses, no shoes or toys. Gone are the days when, after having a warm bath in the evening, you would sit at table with Mummy and enjoy her good and simple food. Gone are the comfortable beds, the warm blankets and clean linen she used to provide. . . . Perhaps never again will Mummy and Daddy join you in House No. 8115 Orlando West, the one place in the whole world that is so dear to our hearts.”

Mandela made no apologies. Instead, he told his daughters about their mother’s choices and her convictions and her courage, and he said that as they grew up—in the care of family friends—they would come to recognize the importance of her sacrifices. “In the meantime,” he wrote, “you must study hard and pass your examinations, and behave like good girls.”

Two years later, in March of 1971, Mandela wrote to Zeni, who had just turned twelve, recalling that shortly before she was born her mother had been thrown in jail for fifteen days. “Do you understand that you were nearly born in prison?” Then he summoned a more painful memory, telling Zeni of one of the last times he had seen her. Mandela, already the chief of the A.N.C.’s army of saboteurs and guerrillas, Umkhonto we Sizwe (Spear of the Nation), was living a clandestine life, and Zeni was brought to see him at a safe house.

“I was wearing no jacket or hat. I took you into my arms and for about ten minutes we hugged, and kissed and talked. Then suddenly you seemed to have remembered something. You pushed me aside and started searching the room. In a corner you found the rest of my clothing. After collecting it, you gave it to me and asked me to go home. You held my hand for quite some time, pulling desperately and begging me to return.” Mandela understood. “You felt I had deserted you and Mummy,” he wrote, and added, “Your age in 1961 made it difficult for me to explain my conduct to you.”

Mandela took up armed struggle after the Sharpeville massacre of sixty-seven peaceful protesters, he said, because apartheid left no other choice. At his trial, he faced the death penalty, and when he took the stand to defend himself, in April, 1964, he gave a speech that resonated around the world: “I have fought against white domination, and I have fought against black domination. I have cherished the ideal of a democratic and free society in which all persons live together in harmony and with equal opportunities. It is an ideal which I hope to live for and to see realized. But, my lord, if needs be, it is an ideal for which I am prepared to die.”

The court declined to make him a martyr, and when Mandela was set free, after a total of twenty-seven years in prison, he had already begun negotiating the peaceful transition to democracy. But he never disowned armed struggle. He was, in every cell of his being, a political man, and he knew that without the violence there could have been no negotiation, just as he knew that without negotiation there could be no victory. It was in the negotiation of apartheid’s end that Mandela’s greatness found its fullest expression, and that greatness is in no way diminished by remembering that the last leader of South Africa’s apartheid-era government, F. W. de Klerk, with whom he hashed out the terms of surrender, rightly shared the Nobel Peace Prize with him.

In a post-heroic age, Mandela attained the stature of a classical hero—at once a righteously angry warrior and a wise and just peacemaker, an emblem of reconciliation. Everything that was most promising in South Africa was identified with him, and all that is wretched and dispiriting—brutally unequal, violent and corrupt—was seen not as his failure but as a failure of the country to live up to him. As his strength faded in the past year, ugly squabbles erupted among his political and personal heirs and successors over the ownership of his legacy: A.N.C. leaders dragged in cameramen to have themselves filmed beside the dying patriarch, and two of his three daughters took his old friends to court for control of the lucrative proceeds from art works he had made with his handprints. One angry South African editorialist observed that it looked as if the A.N.C. was fixated on the past because that was “the only noble aspect of its existence left.”

After he was hospitalized earlier this year, for a recurrent lung infection, tributes to Mandela poured in from all over the world. He was the father of one country, but everyone everywhere lays claim to him. Even the Twitter feed of the now defeated rebel warlords of eastern Congo’s M23 movement found justification in the dying man’s words: “ ‘When a man is denied the right to live the life he believes in, he has no choice but to become an outlaw’—Nelson Mandela.” And a South African radio station tweeted the plea of a twenty-two-year-old outside the hospital: “Can he please get well . . . even if he’s 94 . . . for US . . . for us blacks.”

To lead a revolution and to govern in its aftermath are altogether different undertakings, and perhaps Mandela knew his limits. As President from 1994 to 1999, he was revered less for his governance than as a figurehead, and even in retirement—or, as he put it, when he withdrew further from public life, in his “retirement from retirement”—he remained the binding spirit of post-apartheid South Africa. But a Moses does not live to see the promised land—and maybe it can never be found.