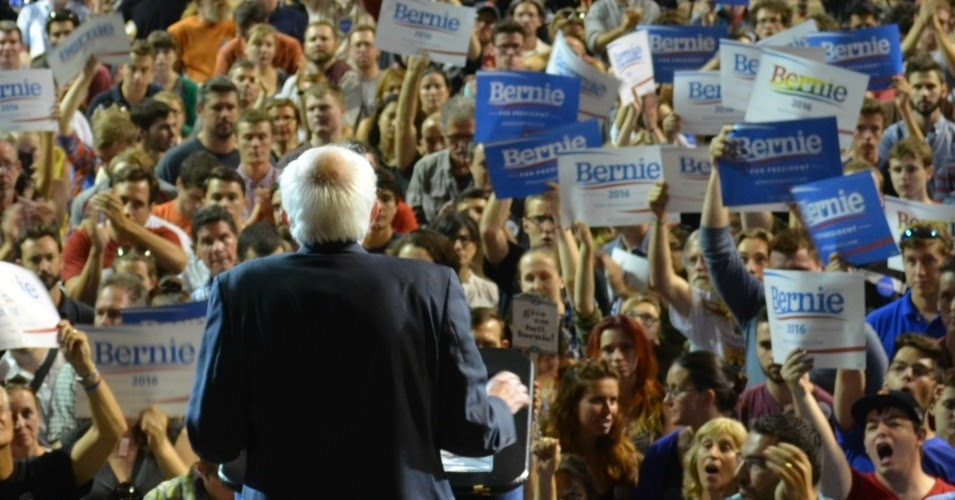 Once People Feel the Bern… The Fire Will Not Go Out

You Are Here: Home » Blog » Editors' Choice » Once People Feel the Bern… The Fire Will Not Go Out

“From Maine to California the American people understand that establishment politics and establishment economics is not working,” said Sen. Bernie Sanders to great applause during a campaign rally last year in Portland, Maine. (Photo: Common Dreams / CC BY 3.0)

Well, today I am supposed to be writing about all sorts of critical issues like opposition to the TPP, ramping up efforts on climate change concerns, and support for the People’s Budget in the House that stands as such a great challenge to the terribly damaging budget resolution the Republican majority supports.  Any one of those issues is worthy of a great deal of ongoing attention, and I will get back to them in due time.  My mind is on being working class or poor in a nation full of economic bullies who make it part of their daily lives to behave themselves as if they are superior and more deserving than all the rest of us.

Bernie Sanders reminds people often that it is expensive to be poor in America, and so it is. Goods and services—especially necessities of life—are much more expensive for those who live paycheck to paycheck. Smaller quantities cost more. Deposits are required and held. Credit is withheld. In every way you could think of and some you may not have, those who don’t have healthy bank balances are penalized in advance of actually having reneged on any financial obligation. I know. I’ve lived it.  And I live it still.

Today as I traveled to attend a meeting in DC, I was reminded over and over again about how different the world feels and responds to those without sufficient cash and/or credit cards.  I feel blessed to have meaningful work and blessed to be at all a part of the work to elect Bernie Sanders. It makes the trauma of that past several years as my husband and I have fought the healthcare system a lot less painful. But discrimination against the working class is still alive and well—and if I could make only one point this election season to other working class people of all races, ages and cultures, it would be that what separates us most is not the color of our skin or our religion or our age, sexual orientation or gender, it is our wealth or lack thereof. We are being worked and played by so many of the candidates.

Have you seen all the photos of the Trumps, the Clintons, the Bloombergs, and others in their economic classes on the golf courses, at one another’s weddings and social gatherings, and doing business together in every way?  That is a world in which most of us are not welcomed unless we are sweeping the floors, scrubbing the toilets, serving their hors d’oeuvres, or servicing their many needs. The only time most wealthy people want much to do with the rest of us is when they must. And during the election season, they must. They need us. Because until they can fully and completely own this democracy with their money, our votes are still enough to really screw things up for them as they move in ever increasing numbers into the roles that elevate their own wealth and status and damage ours.

Well. Bernie isn’t like that. And people know that. It is an issue of authenticity. This is the biggest difference I see between the presidential candidates. None of these people are dumb, and all of them have advisors keeping them on message for the masses. Their wealthy friends understand that they will have to say things that sound like they might actually stand up to corporate interests.  It is allowed because they know that once their friends are elected, the money and the deals and the favoritism will flow unfettered by concern for the working class. But during Bernie’s career, he has remained committed to giving all of us a fair shake in our daily lives—with healthcare, with education, with environmental issues, with wages, with a fair criminal justice system, and beyond. These are the places where so many of us struggle to stay afloat every day.

So, exactly how will the wealthy and powerful who are the political establishment in this country put out the fire that Bernie’s campaign has ignited?  Will they be able to quiet the restlessness of so many millions of us who believe that without a political revolution we will be crushed?  I do not think so.

To “FeeltheBern” is more than a catchy phrase or a hashtag to be shared on social media. Those of us who support Bernie believe we are being heard and advocated for in ways we have not felt in our lifetimes with regard to the issues that are critical to our quality of life every single day. The Bern we feel is genuine. We will not be denied. Bernie is mad for us. Bernie is mad with us. Bernie is mad enough to endure the wrath of those in his own political class who would have us all walk the line for the status quo. Bernie gives voice to our demands of the wealthy, political elite not to kill any hope for democratic governance by and of the people.  And unless these demands of the people are heard and addressed, it is likely that our experiment in representative democracy, however imperfect, will be finally and fully extinguished from the earth.