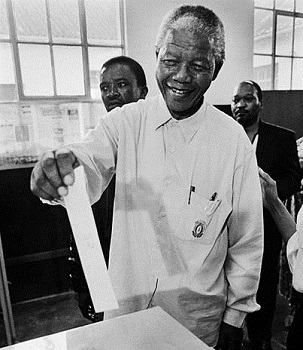 Last night, it was difficult to cut through the fog of reaction from current day conservatives to the death of Nelson Mandela. However, despite the kind words and the tributes, it should never be forgotten that the conservative movement in this country took great pains to condemn and demonize Mandela and the African National Congress, doing all they could to undermine the economic boycott of South Africa and the anti-apartheid movement.

Nelson Mandela and his comrades with the African National Congress were not always the toast of the town, especially in Washington, D.C.

President Ronald Reagan, who placed the ANC on the U.S. terror list in the 1980s (a designation that wasn’t removed until 2008), labeled the Anti-Apartheid Act of 1986 as “immoral” and “utterly repugnant.” Instead, the Reagan Administration adopted “a position a position of constructive engagement towards South Africa.” The Nation’s Sam Kleiner reported in early July.

“Assistant Secretary of State for African Affairs Chester Crocker pushed for expanded trade with Johannesburg under the belief that it was a strong ally in the Cold War. While divestment activists urged the United States to isolate the South African regime, the Reagan administration was pushing for more trade and engagement.”

In 1985, Rep. Dick Cheney voted against a congressional resolution calling for the release of Mandela and the recognition of the African National Congress. North Carolina Senator Jesse Helms “turned his back during Mandela’s visit to the U.S. Capitol.”

The Religious Right in this country — and the Rev. Jerry Falwell and Pat Robertson in particular — were steadfast in its support of apartheid as well as counter-revolutionary movements in Angola and Mozambique. “The liberal media has for too long suppressed the other side of the story in South Africa,” he said. “It is very important that we stay close enough to South Africa so that it does not fall prey to the clutches of Communism.”

“South Africa is torn by civil unrest, instigated primarily by Communist-sponsored people who are capitalizing on the many legitimate grievances created by apartheid, unemployment and policy confrontations,” Falwell said.

David John Marley noted in Pat Robertson: An American Life that Robertson said the ANC was “led by communists and was hostile to Israel” and “far too radical an element to ever work with,” while “his campaign literature made similar claims for the need to support the white government.”

In an infamous segment on “60 Minutes,” the Institute on Religion and Democracy excoriated the World Council of Churches (WCC) over its support for Mandela. The John Birch Society called Mandela “a communist terrorist thug.”

People for the American Way’s RightWingWatch reported that “Even in 1998, Eagle Forum founder Phyllis Schlafly lumped Mandela together with notorious dictators.”

The Nation’s Kleiner noted that “Republican power brokers such as Grover Norquist, Jeff Flake and Jack Abramoff all launched their careers in the anti-divestment campaign, seeking to keep trade open with apartheid South Africa.”

Abramoff, “now a disgraced former lobbyist convicted of fraud, conspiracy and tax evasion, got much of his start from his work with South Africa,” Kleiner pointed out. “Abramoff visited the country following his term as National Chair of the College Republicans in 1983 and met with pro-apartheid student groups linked to the South Africa’s Bureau of Security Services. In 1986, he opened the International Freedom Foundation. Ostensibly a think tank, it was later revealed as a front group for the South African Army as part of ‘Operation Babushka’ meant to undermine Nelson Mandela’s international approval. The group had over ’30 young ideologues in offices on G Street in Washington, Johannesburg, London and Brussels’ working on propaganda in support of the South African government.”

Grover Norquist got involved with the pro-South Africa movement and visited the country in 1985 for a “Youth for Freedom Conference,” sponsored by South African businesses. According to Kleiner, Norquist said, “The left has no other issue [but apartheid] on campus. Economic issues are losers for them. There are no sexy Soviet colonies anymore.” Norquist later went to Angola – a country torn apart by the murderous actions of Jonas Savimbi, a leader much admired by U.S. conservatives.

According to Kleiner, “Norquist became a ghost-writer for Savimbi’s essay in Policy Review,” then a publication of the Heritage Foundation. “When he returned to Washington, he was greeted in conservative circles as a ‘freedom fighter,’ and he proudly placed an ‘I’d rather be killing commies’ bumper sticker on his brief case.”

In death, some in the conservative movement are still throwing weaponized darts at Mandela. After Mandela’s death, Gregory Hood wrote in American Renaissance: “The truth is, the saintly visage of Mandela—all crinkly eyes and warm smiles—conceals a violent past as a terrorist.”

Nelson Mandela believed in reconciliation. He believed that forging a way forward was more important than dwelling on past grievances. That being said, I don’t think he’d want anyone to forget the history of apartheid, the struggle against it, and role that conservatives in the U.S. played.