‘This is how you change politics’: How black activism is shaping 2020

You Are Here: Home » Editors' Choice » ‘This is how you change politics’: How black activism is shaping 2020 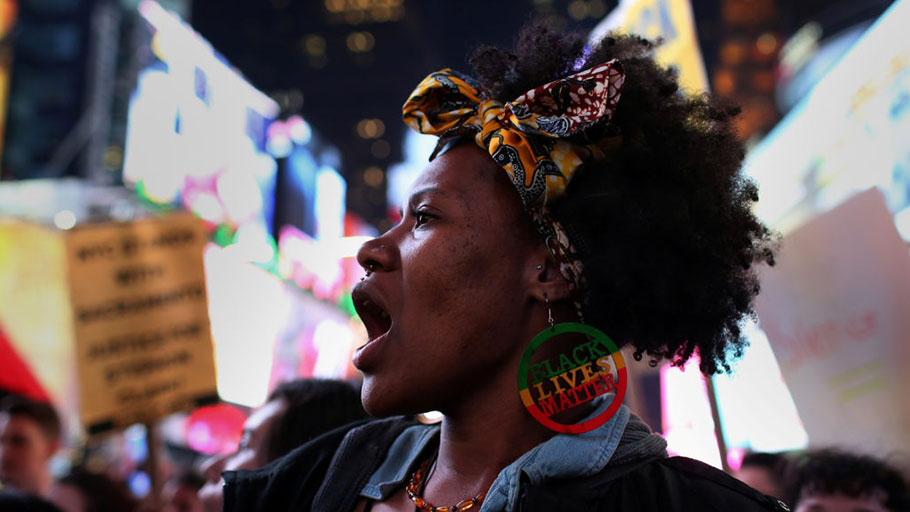 A protester wearing a “Black Lives Matter” earring chants slogans as she marches in Times Square in the Manhattan borough of New York City, during a protest against the death of Stephon Clark in Sacramento, California, U.S. March 28, 2018. Reuters, Gabriela Bhaskar.

Black organizers continue to play a significant role in informing and driving policy within the Democratic Party.

In 2014, Kayla Reed was working as a pharmacy technician in St. Louis, Missouri, when news broke that an 18-year-old African American man named Michael Brown was fatally shot by a white police officer in nearby Ferguson.

Brown’s death came amid other highly publicized killings of black people across the country, sparking a new wave of black activism under the umbrella of Black Lives Matter, the Movement for Black Lives and other groups demanding an end to violence and systemic discrimination against black people. Motivated by the events in Ferguson, Reed decided to become one of those organizers.

Today Reed, 29, is the executive director for Action St. Louis, a grassroots racial justice organization, and a co-lead for the Movement for Black Lives’ electoral justice project. The mass demonstrations have lessened — and with them, some of the more visible signs of black activism. Still, advocates play a significant role in informing and driving policy within the Democratic Party, especially on key issues, including economic equality, education and criminal justice.

“The most effective demonstration of power is when people don’t think about where [an idea] comes from, they just do it,” said Deva Woodly, an assistant professor of politics at the New School. “This is how you change politics.”

The most effective demonstration of power is when people don’t think about where [an idea] comes from, they just do it.

Reed supported Warren (who dropped out of the race on March 5, but has not endorsed any of the remaining candidates), and is one of many activists and young voters who identified with Warren’s and Sanders’ calls to restructure political institutions that have discriminated against people of color. “We’re not just talking broadly about these issues anymore, but we’re understanding that because there are different outcomes based on race we have to be race conscious in our policy creation,” Reed said.

But the support Warren and Sanders have received from young black voters and black activists has not translated to wide support from black voters, who largely identify as moderate and are rallying behind Biden.

Harold McClain, 72, a retired educator from South Carolina told the PBS NewsHour ahead of the Feb. 29 South Carolina primary that he sees Biden as the “safest pick” to defeat President Donald Trump in November. “I think our country is in a place right now where we need someone who is tried and true and can really put some things back in place that our current president [has] just destroyed,” McClain said.

That sentiment is reflected among other black voters. Despite three early-state primary losses, Biden’s appeal was apparent in his decisive victories in South Carolina and 10 of the 14 Super Tuesday states. Biden won a majority of black voters in the South, as well as voters ages 65 and older. Sanders’ focus on young voters did not lead to the turnout he hoped for across the Super Tuesday states.

This generational divide highlights a major challenge for Democrats in 2020: how to balance the goal of beating Trump in the general election with the need to evolve alongside young voters and activists.

Since it began, the Movement for Black Lives, a coalition of 50 groups that includes the Black Lives Matter network, has not only attracted international media attention, it also garnered government scrutiny. In 2017, a leaked FBI report outlined what the bureau described as a growing threat of “black identity extremism” as a result of “perceptions of police brutality against African Americans.”

At least one black activist was designated a black identity extremist and arrested after he posted on Facebook expressing solidarity with a person suspected in the killing of a police officer. The charges were later dropped. News organizations also reported cases of FBI and local police surveillance and infiltration of black activist networks, including Black Lives Matter.

Amid this increasingly tense setting, some activists have been forced to rethink their strategy. Still, they’ve been able to effect local change across the country. As part of that effort, Reed and Action St. Louis organized for Wesley Bell, a black professor and former public defender who challenged St. Louis County prosecutor Bob McCulloch, a 28-year incumbent who led the probe of Michael Brown’s death.

Bell’s 2018 victory came amid the elections of other reform-minded prosecutors who are rethinking charges and sentences for non-violent crimes, like marijuana possession, resulting in the expungements of thousands of records. For instance, in the early days of taking office, Bell announced his office would not prosecute for possession of small amounts of marijuana

Cliff Albright is a cofounder of the Black Voters Matter fund, which provides resources and training to local advocacy groups. Albright believes the Movement for Black Lives has undoubtedly shaped conversations and down-ballot elections over the years. However, when it comes to the 2020 presidential primaries, he thinks voters are too fixated on electability.

“In some ways I feel like we’ve really taken a step back [nationally],” Albright said. “We just went through a couple years that were driven by issues and our passion to vote for folks that represented those issues,” Albright said. Now, people appear more concerned with who can beat Trump, rather than choosing a candidate whose platform best represents the issues they care about, Albright added. 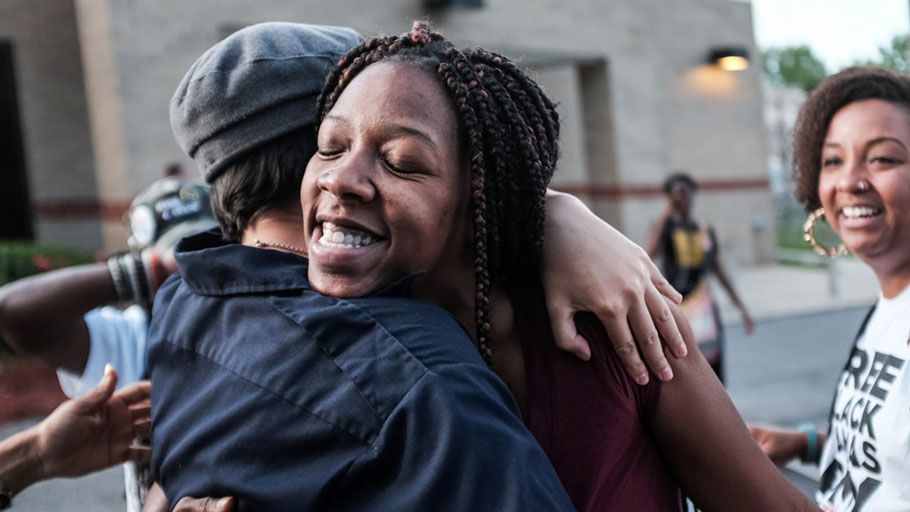 How activism becomes part of the party platform

Sanders is frequently credited with pushing the Democratic party left on key issues in recent history, but a number of the Vermont senator’s campaign proposals have roots in earlier U.S. presidential bids. For example, the 1988 presidential platform of civil rights activist Jesse Jackson, called for single-payer universal health care, providing free community college and re-thinking minimum sentencing for drug offenses. Sanders at that time endorsed Jackson for president, and last week, Jackson endorsed Sanders in his 2020 bid for the White House.

These same concerns have emerged as prominent issues in today’s primary race, and have been driven by the voices of activists. In 2016, the Movement for Black Lives coalition released a detailed policy platform that includes developing jobs programs for marginalized black communities, ending corporate influence in politics, restructuring tax codes, divesting from fossil fuel use and ending cash bail in jails.

Most of today’s Democratic presidential candidates are discussing these issues in some capacity and have sought input from black organizers, said Jalisa Washington-Price, a democratic strategist who worked as the deputy national policy director and South Carolina state director for Sen. Kamala Harris’ 2020 presidential campaign. Harris dropped out of the race on Dec. 3, 2019. She announced her endorsement of Joe Biden on March 8.

Candidates wanted to hear from activists “on how they should be talking about black issues in a way that I don’t think candidates or campaigns have done before,” Washington-Price said.

But some activists remain disenchanted by what they’ve seen from the 2020 primaries. Black Lives Matter Michigan organizer Angela Waters Austin was encouraged to see people of color competing in the early Democratic primary field. But the party’s most diverse group of primary candidates has since dramatically changed, dropping from seven candidates of color to one by the week of Super Tuesday.

Many activists like Austin aren’t interested in stump speeches. Throughout the primary campaigns, they called for specific policy platforms and closely examined the candidates’ past records. As a result, the 2020 Democrats faced protests on their past policies in their political careers and questions about their commitment to understanding issues that affect black communities.

But as activists push candidates toward more liberal policies, other black voters have helped revive Biden’s moderate campaign. Biden’s widespread support among older black voters is driven by his experience, his long standing ties to black community leaders and his perceived chances of beating Trump. That confidence in Biden jump started his campaign after poor performances in early state contests and gave him the leading delegate count so far over Sanders.

As the primaries continue to play out on the national stage, Austin of Black Lives Matter Michigan avoids fixating on one particular candidate; the efforts to improve how governments serve people of color will continue no matter the outcome.

“It has to do with holding the entire system accountable, because it’s really not about the candidates,” Austin said. “Candidates come and go. Elected officials come and go. The system stays the same.”

This article was originally published by PBS.

Featured image: A protester wearing a “Black Lives Matter” earring chants slogans as she marches in Times Square in the Manhattan borough of New York City, during a protest against the death of Stephon Clark in Sacramento, California, U.S. March 28, 2018. Reuters, Gabriela Bhaskar.

Bernie Sanders Reached Out to Black Voters. Why Didn’t It Work?

Bernie Sanders Reached Out to Black Voters. Why Didn’t It Work?
We Need Your Support — Donate, Share, Sign-Up Ways to Support