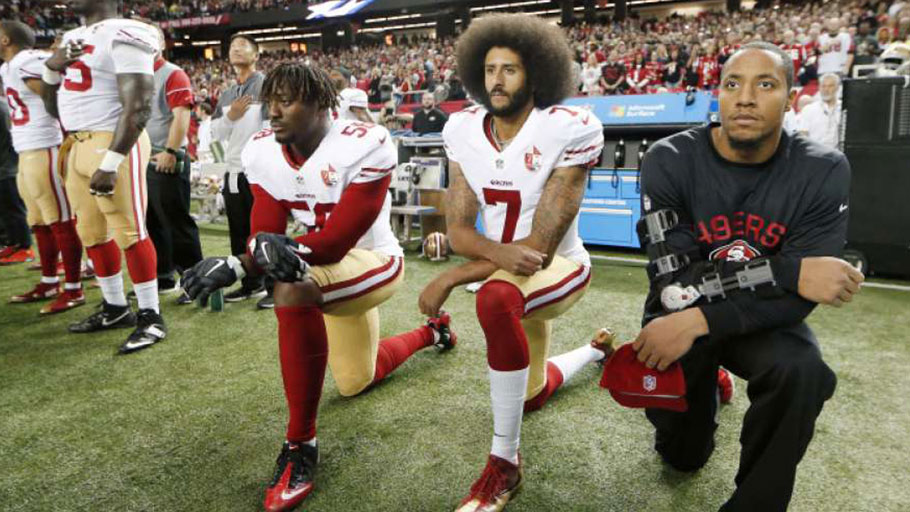 Trump Tries to Divide Us, But We Are Better Nation Than That

You Are Here: Home » Blog » Editors' Choice » Trump Tries to Divide Us, But We Are Better Nation Than That

In this Dec. 18, 2016, file photo, San Francisco 49ers quarterback Colin Kaepernick (7) and outside linebacker Eli Harold (58) kneel during the playing of the national anthem before an NFL football game against the Atlanta Falcons in Atlanta. (AP Photo/John Bazemore, File)

When Colin Kaepernick first took a knee during the national anthem last year, he acted alone, a silent protest against a society that repeatedly fails to hold police accountable for the killing of unarmed African Americans. Kaepernick was condemned and now essentially has been banned from the NFL, with the owners surely colluding to ensure that a quarterback of immense talent would not find a place among the dozens of teams desperately in need of one.

Kaepernick is alone no longer. After Donald Trump’s ugly outbursts and tweets — he called Kaepernick and other protestors a “son of a b—-,” urged the NFL owners to kick out any player with the courage to protest and, bizarrely, condemned rule changes designed to provide some protection against concussions — players and even owners across the NFL reacted. Teams linked arms on the sidelines during the anthem, some kneeling and others not, unified in protest of Trump’s divisive rants and tweets. The Seattle Seahawks, Tennessee Titans and all but one of the Pittsburgh Steelers chose to stay in their locker rooms when the anthem was played.

They stood together to defend the right of their teammates to express themselves, whether they agreed with those views or not. They stood together to show that they are citizens, not chattel. They are skilled athletes practicing their profession, not chained slave gladiators forced to entertain the mob.

Every athlete knows that expressing controversial views publicly is a harsh risk. Their careers are short; their contracts are not guaranteed. The owners are billionaires, dependent on public subsidy, fearful of any controversy. They are clearly prepared, as they did with Kaepernick, to punish independence. Yet dozens of athletes responded to Trump’s jibes by joining the protest, and their teammates stood arm-in-arm defending their right to do so. Trump thinks the NFL is a plantation. The players showed the real patriotism that the flag truly represents.

For Trump, the assault on protesting black athletes — he also tweeted his withdrawal of an invitation to Stephen Curry and the Golden State Warriors to visit the White House after Curry expressed reservations about the president — is a classic diversion. He has terrified the country with his blustery, schoolyard insults to a North Korean leader armed with nuclear weapons. His efforts to dismember basic health care are failing despite lies and bribes. Hurricanes and wildfires are mocking his inane denial of climate change. His embrace of the “fine people” in the neo-Nazi march in Charlottesville, Va., alarmed decent people across the country. After eight months in office, he has the lowest approval ratings of any president since polls were invented.

Black athletes — many of them millionaires — make a perfect foil. How dare they protest when they have been “given” so much? Much of Trump’s base already thinks minorities enjoy special privileges. Going after black athletes simply stokes their anger and resentment, while masking Trump’s myriad failures and betrayals.

Kaepernick took his knee to protest the criminal police killing of African Americans. This year to date, the Washington Post reports that 10 unarmed African Americans, and 32 unarmed people in total, have been fatally shot by the police in the United States. St. Louis has been shaken by days of protests after the acquittal of a police officer who shot an 24-year-old African-American after a car chase.

Trump has fueled this conflagration. Police chiefs rebuked him when he urged police to feel free to rough up suspects. His Department of Justice has told prosecutors to seek maximum sentences, adding to mass incarceration that shames this nation. His DOJ has also scorned the consent agreements that Obama’s Justice Department forged to reform racially biased police departments. Kaepernick and the players taking a knee have ever more reasons to do so.

The stern visage of Dr. Martin Luther King now graces the national mall. America has come a long way since he left us. We are a more diverse nation. Segregation is no more. We still need leaders and citizens who will work to bring us together, to reform biased institutional practices, to rededicate ourselves to fulfilling Dr. King’s dream. Sadly, in the White House, this president has chosen, purposefully and with malice, to drive us apart to serve his own political ends. The protests of the NFL players this weekend show that we are a better nation than that.