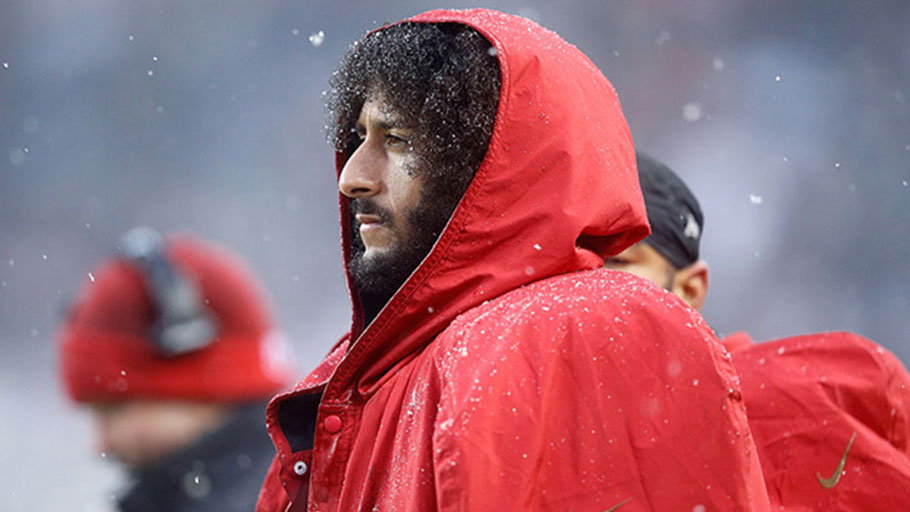 It is amazing how quickly and willingly so many people, when pressed by a discomforting situation, will take on a societal self-policing role that favors power and condemns anyone asking necessary questions. This phenomenon exploded after September 11, goaded on by the likes of Bush’s press secretary Ari Fleischer, who famously warned us all to “watch what we say.”

That voluntary silence, that timorous obsequiousness to power, was a huge part of the reason the Bush administration was able to lie the country into war in Iraq. Why don’t you support the troops? Why do you hate America? These obnoxious broadsides were greeted with an enthusiastic “Yeah!” by those who tend toward self-policing, because doing so feels safer, because belonging feels good.

Whether they know it or not, many of the people who have responded to football players’ protests by jumping on board Donald Trump’s “patriotism” bandwagon are doing exactly that: Policing their fellow citizens. They are obeying a set of authoritarian “rules” that have nothing to do with “love of country” and everything to do with power and control. Those people love their country, to be sure – not always a good thing, as history has so often shown — but in this matter, they have embraced their own repression and the repression of their fellow citizens.

Months before Trump won the 2016 election, NFL quarterback Colin Kaepernick refused to observe standard protocol during the national anthem before a preseason game to protest police violence against Black people. “I am not going to stand up to show pride in a flag for a country that oppresses Black people and people of color,” Kaepernick said at the time. “To me, this is bigger than football and it would be selfish on my part to look the other way. There are bodies in the street and people getting paid leave and getting away with murder.”

Those bodies in the street have names: Tamir Rice, Michael Brown, Charleena Lyles, Dontre Hamilton, Eric Garner, John Crawford, Deborah Danner, Ezell Ford, Laquan McDonald, Akai Gurley, Korryn Gaines, Antonio Martin, Jerame Reid, Terence Crutcher, Keith Lamont Scott – all shot and killed by police since 2014, new chapters in a generational tale of state violence that has since seen the rise of the Black Lives Matter movement, and shined a glaring light on the deadly tactics of highly weaponized and militarized police forces all across the country.

If further proof that the United States is a profoundly racist nation were needed, look no further than the fact that Kaepernick’s decision to stage his protest during the national anthem seems to be of more concern to our federal government than all the people of color who have been shot down by cops. Demagogues like Trump, along with all his willing patriotic quislings, pounced on the opportunity to rise in high dudgeon at even a hint of disrespect directed toward the flag or the anthem. Meanwhile, Michael Brown’s body was left in the street for hours after he was cut down by police.

Why did Trump decide to pick this fight with Kaepernick and the NFL during some random Alabama political pep rally? There are many theories: 1. He still holds a grudge against the NFL, which snubbed him years ago; 2. He was seeking a distraction after the collapse of the Graham-Cassidy ACA repeal bill; 3. Ditto on seeking a distraction from Russia, North Korea, Puerto Rico and the curious airplane habits of his Cabinet members; 4. He simply can’t help himself; 5. All of the above.

In the end, it does not matter. Mr. Trump saw an opportunity to wrap himself in the flag and borrow the honor of soldiers in service to himself. His self-policing brigades matched him step for step, accusing Kaepernick and all the other players who took a knee last weekend of disrespecting the troops by disrespecting the anthem. They fought for your freedom, goes the eternal refrain, so you are required to stand for the anthem. To do anything else hedges treason.

A soldier I spoke to (who asked that his full name not be used) named Scott addressed this specifically and, I believe, captures the views of a great many of his fellow soldiers. “I served in combat communications with field artillery, armored cav, and mechanized units with the 101st Airborne and the 3rd Infantry Divisions,” he told me. “I served precisely so that people like Colin Kaepernick could take a knee in silent protest to draw worldwide attention to systemic racism and police brutality. I served to protect free speech, including his. For a sitting president to demand that people who call out injustice be fired for doing so smacks of the worst sort of authoritarianism.”

Every effective protest in American history has been met with the lament, “You should have done it differently.” So it has been with these anthem-related actions. People feel very strongly about the anthem and the flag, we are told. Do something else to make your point. That is not how effective protest works. Effective protest disrupts the accepted order of things, ruffles feathers, channels thought and discussion in new directions. Effective protest rattles the cage. Protest is a cherished American tradition going all the way back to Crispus Attucks, another Black man whose body fell in the street after the authorities opened fire.

Civil rights protesters in the 1960s and 1970s were specifically instructed to take a knee if the police or counterdemonstrators threatened violence. Doing so was not only an act of self-defense, but was intended to show that the protesters meant no harm. Taking a knee was an act of nonviolence practiced by Martin Luther King, Jr. The contrast between the quiet kneeling of NFL players this weekend and Trump’s beet-faced bellowing could hardly be more plain. The players made their point old-school.

Donald Trump has told maybe ten thousand lies since becoming president, but the worst of the lot came when he responded to the NFL protesters by saying, “This is not about race.” That is the sword and shield of the white supremacist: flat denial that racism even exists. The self-serving logic is simplicity itself, as it exonerates the racist: If there is no racism, there can be no racists, and all those people yelling about their rights are just ungrateful layabouts looking for a free lunch.

Colin Kaepernick began this movement to protest racist police violence against Black people and other people of color in the United States. Trump and the media, in encompassing the league-wide actions last Sunday and Monday, did their best to sand down Kaepernick’s seedcorn message. It was all about “unity,” went the media’s refrain.

That was part of it, to be sure — when a player gets called a “son of a bitch” by the president of the United States, many other players are going to have his back — but in the end, this redirection of the language served only to obscure the original point: Colin Kaepernick wants the police to stop killing Black people, and until that happens, you can keep your flag and your anthem.

Samuel Johnson called patriotism the last refuge of the scoundrel. Oscar Wilde named it the virtue of the vicious. Many of the people who have fallen in line against Kaepernick and the larger protest he inspired are neither scoundrels nor vicious. They are, however, self-policing in the name of authority. They are obeying a set of rules that do not exist. It has nothing to do with freedom and everything to do with maintaining an established order that is racist down to its DNA. This is yet another shameful American tradition.

The vicious scoundrel in this matter is the racist authoritarian president who attacks Black athletes for peacefully exercising their rights while calling violent Nazis and Klan members “fine people.” Resisting such people, their arguments and their works, is our greatest tradition of all. Remember that when the self-policers come calling. They will. They always do.

William Rivers Pitt is a senior editor and lead columnist at Truthout. He is also a New York Times and internationally bestselling author of three books: War on Iraq: What Team Bush Doesn’t Want You to Know, The Greatest Sedition Is Silence and House of Ill Repute: Reflections on War, Lies, and America’s Ravaged Reputation. His fourth book, The Mass Destruction of Iraq: Why It Is Happening, and Who Is Responsible, co-written with Dahr Jamail, is available now on Amazon. He lives and works in New Hampshire.