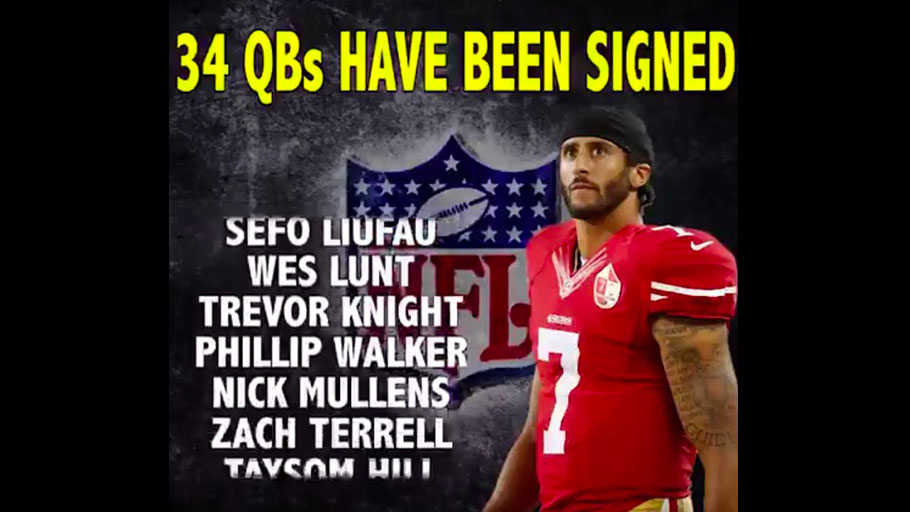 Dallas Cowboys owner Jerry Jones took a knee over Trump’s insult. Shad Khan, Jacksonville Jaguars owner, linked arms with his players. Nearly a dozen NFL owners issued testy statements blasting Trump’s insult to the NFL. A few NFL coaches and GMs voiced their outrage over the insult. Nearly all the NFL sports jock commentators were in a huff over Trump’s insult. And of course, hundreds of NFL players sat, knelt, raised clenched fists, and even stretched, during the national anthem in protest over the insult. None of this changed not one, two, but three brutal realities.

The first and harshest of all is that the man who ignited the firestorm of hand wringing, soul searching and recriminations within and without the NFL is still unemployed. The 32 NFL owners have made it clear, some publicly, and some simply by their inaction and silence, that Colin Kaepernick is still very much persona non-grata in their league. The special emphasis is on “still” because despite the mass indignation at Trump, Kap is still unemployed. And there has been absolutely no hint, sign or indication from any of the protesting owners that they, or any of the other owners, are any more willing the Tuesday after the last of the weekend games ended than the day before they began to give him another shot in the league.

The second brutal reality is that the reason that Kap took his fateful knee in the first place was nowhere to be seen or heard in any of the sea of verbiage and commentary from mainstream media football commentators. Kap made it clear. He was not kneeling in protest against the national anthem. He was certainly not kneeling in protest against the meat on the hoof gross exploitation of the players in the NFL. He knelt to protest police violence and racial injustice in society. The owners weren’t kneeling for that. It’s doubtful that many of the players knelt, sat or linked arms in protest against that. It was simply to the owners there way of thumbing their nose at a guy who had the temerity to bad mouth their league and in effect challenge their awesome, near dictatorial power. As for the players, it was a reaction to the vulgarity of one man and his disdain for them. But the police killing of Blacks? That’s a whole different matter.

The other brutal reality is that the NFL is still the same NFL that it was the day before and after Trump popped off. Jerry Jones did take a knee, but he was careful to hoist himself off that knee to stand at rapt attention for the playing of the national anthem. The players did the same. They stood at rapt attention facing a football field-sized American flag draped across the entire field.

But even more telling was the fan reaction. In several cities where the players and owners protested, the fans rained down boos and hoots on them. Thousands of fans waved the American flag and lustily sang the Star-Spangled Banner with something akin to religious zeal. This was not insignificant and could not be sloughed off as the vile reaction of a bunch of beer guzzling, racist, know-nothing fans. They are the ones who spend tens of millions on tickets, NFL paraphernalia, parking, and at the concession stands. They are the ones who camp out in the parking lots, streets, and front yards around the stadiums with their ritual pre-game tail gate parties on game day. They are the backbone of the NFL.

They are the ones who the owners repeatedly cited as the ones whose feelings they claimed they had to pay attention and respect when wrestling with whether to sign Kap or not. These are one who in numerous informal surveys and polls flatly said that they oppose kneeling during the anthem and, most importantly, loudly swear that they would not support their home team if the team signed Kap. Trump almost certainly had them in mind when he saber-rattled the NFL to give Kap and any other player who disrespected the flag the boot. He spoke for them.

Trump also spoke for them when he doubled down and demanded that the NFL implement a rule banning kneeling during the playing of the anthem.

So, what’s next? Kap made his point. He paid the price for it and in the process stirred a president, a league and a nation to react. However, a reaction is one thing, getting the point of Kap’s protest is another. Whether the owners and players truly got that point is to be charitable, problematic. But one thing isn’t, Kap is still unemployed. And if the owners, have their way, that won’t change, and neither will their league.

Earl Ofari Hutchinson is an author and political analyst. He is an associate editor of New America Media. His latest book is, The Trump Challenge to Black America (Middle Passage Press) will be released in August. He is a weekly co-host of the Al Sharpton Show on Radio One. He is the host of the weekly Hutchinson Report on KPFK 90.7 FM Los Angeles and the Pacifica Network.

Call For Papers — Black Politics, Reparations, and Movement Building in the Era of #45

Call For Papers — Black Politics, Reparations, and Movement Building in the Era of #45
We Need Your Support — Donate, Share, Sign-Up Ways to Support