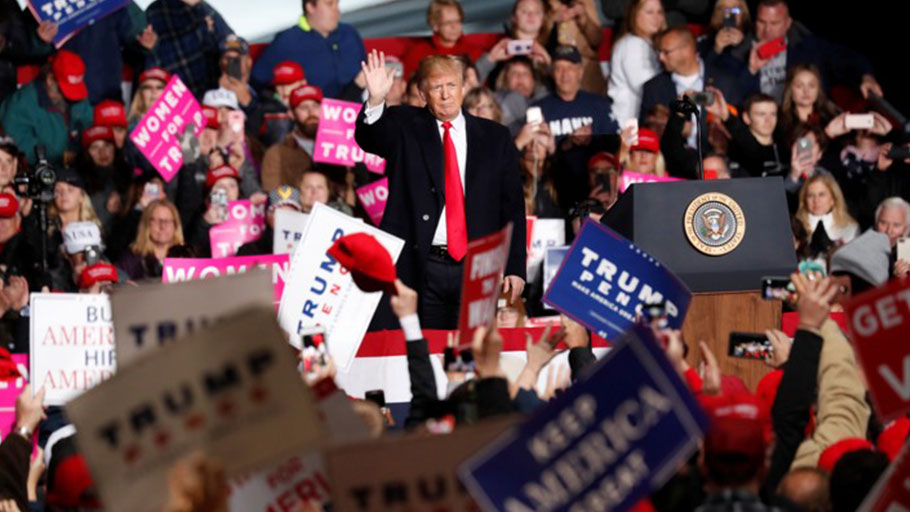 The president’s closing argument in the midterm elections lays bare the logic of his appeal.

By Adam Serwer, The Atlantic —

After Democrats lost the 2016 presidential election, a certain conventional wisdom congealed within the pundit class: Donald Trump’s success was owed to the Democratic abandonment of the white working class and the party’s emphasis on identity politics. By failing to emphasize a strong economic message, the thinking went, the party had ceded the election to Trump.

That explanation ignored the uncomfortable fact that Trump’s economic vision was centered on a politics of white identity, charging that immigrants and unqualified minorities were obtaining advantages the average white American could not claim. That left his opponents with a choice: Contest that vision, or let him attack those groups uncontested. In the meantime, Trump’s administration has seen that economic message almost entirely subsumed by the focus of congressional Republicans on tax cuts for the wealthy and plans to shrink the social safety net. But even as the message has shifted, there hasn’t been a corresponding erosion in Trump’s support. The economics were never the point. The cruelty was the point.

Nevertheless, among those who claim to oppose identity politics, the term is applied exclusively to efforts by historically marginalized constituencies to claim rights others already possess. Trump’s campaign, with its emphasis on state violence against religious and ethnic minorities—Muslim bans, mass deportations, “nationwide stop-and-frisk”—does not count under this definition, but left-wing opposition to discriminatory state violence does. (A November panel at the right-wing Heritage Foundation on the threat posed by “identity politics,” with no apparent irony, will feature an all-white panel. )

But the entire closing argument of the Republican Party in the 2018 midterm elections is a naked appeal to identity politics—a politics based in appeals to the loathing of, or membership in, a particular group. The GOP’s plan to slash the welfare state in order to make room for more high-income tax cuts is unpopular among the public at large. In order to preserve their congressional majority, Republicans have taken to misleading voters by insisting that they oppose cuts or changes to popular social insurance programs, while stoking fears about Latino immigrants, Muslim terrorists, and black criminality. In truth, without that deception, identity politics is all the Trump-era Republican Party has.

Trying to scare white people is an effective political strategy, but it is also an effective ratings and traffic strategy. Trump’s ability to manipulate the media through provocation and controversy has been effective precisely because covering those provocations and controversies provides news outlets with the ears and eyeballs they crave. Trump considers the media “the enemy of the people” only when it successfully undermines his falsehoods; at all other times, it is a force multiplier, obeying his attempts to shift topics of conversation from substantive policy matters to racial scaremongering. The tenets of objectivity by which American journalists largely abide hold that reporters may not pass judgment on the morality of certain political tactics, only on their effectiveness. It’s a principle that unintentionally rewards immorality by turning questions of right and wrong into debates over whether a particular tactic will help win an election.

In the closing weeks of the campaign, the president has promised a nonexistent tax cut to the middle class after two years in which unified Republican control of government produced only a windfall for the rich; he has spread falsehoods about a caravan of refugees traveling through Central America; he has invented wholesale a fiction about anti-immigrant riots in California to justify his policies; and his administration is considering revoking federal recognition of the existence of trans people. This is of a piece with the Trump administration’s general policy agenda, which has involved austerity for the working class and the poor and generosity to the wealthy or connected. Trump’s nativism, and the Republican Party’s traditional hostility to government intervention on behalf of the poor, have had a happier marriage than some might have expected.

But that wasn’t what Trump promised—rather, his 2016 campaign pledged both generous social-insurance benefits for working-class white Republicans and cruelty for undeserving nonwhites. The Trump White House delivered on the latter, but not on the former, and so Republicans are scrambling to insist that they will cut taxes on the middle class, offer robust health-care protections, and protect Medicare, Medicaid, and Social Security, even as GOP leaders in Congress plot to slash all three to cut the deficit created by their upper-income tax cuts.

The result is that Republicans are pretending to hold the Democratic Party’s positions on the welfare state while attacking Democrats for failing to protect the nation from the threat posed by refugees seeking asylum, “Middle Easterners,” and crime. In upstate New York, an embattled Republican incumbent attacks his black, Harvard-educated Democratic challenger as a “big-city rapper”; in California, an anti-immigrant Republican under federal indictment smears his Arab American rival as a terrorist; in Georgia, a state far from the Southern border, the Republican candidate for governor brags that he’ll drive around in his pickup truck and “round up criminal illegals and take ’em home myself.” Although the president hasn’t spent as much time in recent appearances emphasizing the confirmation of Supreme Court Justice Brett Kavanaugh, he framed the opposition to his nominee, who faced multiple accusations of sexual assault, as an attack on powerful men by dangerous feminists.

[ Caitlin Flanagan: Why the left is so afraid of Jordan Peterson ]

This approach has drawn predictable criticism from the left for its appeal to prejudice, but somehow, few of the pundits convinced that identity politics poses a threat to democracy have displayed alarm as the president and his party have built a second nationwide campaign around it.

That is to be expected. Underlying the American discourse on identity politics has always been the unstated assumption that, as a white man’s country, white identity politics—such as that practiced by Trump and the Republican Party—is legitimate, while opposition to such politics is not. For Americans whose Americanness is considered conditional, accepting this implicit racial hierarchy is the only praiseworthy or acceptable reaction. When armed agents of the state gun down innocent people in the street, when the president attempts to ban people from entering the U.S. based on their faith, or when the administration shatters immigrant families, these are burdens that religious and ethnic minorities must bear silently as the price of their presence in the United States. And in the impoverished moral imagination of Trumpist political discourse, any and all white Americans who also oppose such things must be doing so insincerely in an effort to seek approval.

America is not, strictly speaking, a center-right or center-left nation. Rather, it remains the nation of the Dixiecrats, in which the majority’s desire for equal opportunity and a robust welfare state is mediated by the addiction of a large chunk of the polity to racial hierarchy. It is no coincidence that the Democratic Party’s dominant period in American history coincided with its representation of both warring impulses and ended when it chose one over the other. The midterms offer a similar choice for the American voter, in rather stark terms.