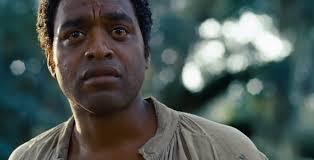 You Are Here: Home » Blog » Commentaries/Opinions » Two Hours of “12 Years a Slave”

There is a lot of merit to the rumor and rave that “12 Years a Slave” is the best film ever made on the long, dark night of bondage, but as Les McCann once sang “Compared to What?”  One thing for certain there is enough raw brutality, if not the  gratuitous killing that governed “Django Unchained,” to make you turn from the screen, and none more harrowing than when the slave girl Patsey’s back is rippled with bloody whelps.   Many of you have seen the picture of Gordon the slave whose back is mangled with rope-sized whelps, but you witness how he may have received them with this savage whipping of Patsey (Lupita Nyong’o).

Folks who saw “Django Unchained” will be reminded of a number of horrible incidents and characters, though Leonardo DiCaprio’s Calvin Candie can’t hold a candle to Michael Fassbender’s vicious and rapacious Mr. Epps.   And there is no comedic relief here.  The scene where Solomon Northup (Chitwetel Ejiofor) wrests the whip from the slave breaker conjures a similar one in which Django (Jamie Foxx) turns the table on his assailant.  But these comparisons only serve to authenticate commonalities of the slave experience, and beyond the two films the more informed viewers will inevitably find parallels in “12 Years a Slave” with other slave narratives, particularly with the riveting autobiographies of Frederick Douglass who, like Northup, defeated his tormenter, Covey, and thereby realized his manhood.  Douglass, too, was a very fine violinist.

When Northup, a free man, is abducted by two white men, pretending to be excited by Northup’s prowess on the violin and lures him to Washington, D.C., the incident evokes Charles Johnson’s protagonist in his novel Middle Passage who is dragooned out to sea after being thoroughly soused in a saloon by a deceitful ship captain.

Elements of Alex Haley’s classic Roots also occur in the episode where Northup is slapped and commanded that his name is Platt and it’s hard not to think of Kunta Kinte being repeatedly told his name is Tobey.   And, of course, there is the unforgettable Fiddler in Roots who has all the skills Northup possessed.

The film “Amistad” is recalled during the moments on the ship to New Orleans when Northup and two of his fellow captives plot a mutiny.  Director Steve McQueen and writer John Ridley, as they do in many departures from Northup’s narrative, present a different outcome than the book’s, choosing to have one of the conspirators stabbed by the ship’s captain rather than being stricken with small pox and thrown overboard.

Among the many deviations from Northup’s compelling narrative is the number of children he had.  In the narrative he mentions three—Elizabeth, Margaret, and Alonzo—but only two are portrayed in the film, including Quvenzhane Wallis, who earned an Academy Award nomination for her performance in “Beasts of the Southern Wild,” and McQueen and his cinematographer, Sean Bobbitt, capture much of the scenery that was so impressively done in “Beasts…”  Hers is not a spoken part which is of little consequence but it would have been interesting to at least mention Alonzo, who worked so tirelessly to find out what happened to his father with the hope of purchasing him from slavery.  Perhaps keeping it to just two children was a matter of economics.

Another puzzling departure from the narrative involves the mysterious sex scene foreshadowed at the start of the film and then repeated later without any consummation or explanation.  Who is this woman since this is her only appearance? Nowhere in the narrative does Northup mention any sexual encounter between him and another woman.  But he elaborates extensively on the rape of Patsey as well as her physical prowess and persona.  “There was an air of loftiness in her movement,” Northup wrote of her, “that neither labor, nor weariness, nor punishment could destroy…She could leap the highest fences, and a fleet hound it was indeed, that could outstrip her in a race.  No horse could fling her from his back.  She was a skillful teamster.”  And, most rewardingly for her owner, she was the fastest, most productive cotton picker, often amassing 500 pounds of cotton a day.   It would have been useful for the filmmaker to give us at least an aspect of these attributes.

In the film Northup is furtively and futilely seen trying to make ink from black berries, but in his narrative he reports using “white maple bark, and with a feather plucked from the wing of a duck, manufactured a pen.”  When he is given a violin by his master it contradicts his notice in the narrative of having bought one with the savings slaves could keep for their work on Sunday.  And to smash it as he does in the film would have removed the instrument he believed was his salvation through the years of captivity.

One of the astonishing things in Northup’s narrative is the fact that some white slave owners had black wives who were the mistresses of the farm or plantation.  Alfre Woodard has a cameo role as Shaw’s wife, who is either Charlotte or Harriet, depending on which page of Northup’s narrative is credible.  This imprecision questions the authenticity of the odd interracial mating.

These deviations—and we should note that there are similar moments of distraction in the 1984 television version of Northup’s odyssey directed by Gordon Parks and starring Avery Brooks—by no means diminishes the impact of the film, which has a number of unforgettable, if almost unbearable to watch scenes, none more repulsive and wrenching than Northup’s suspension from a noose, his toes pawing the mud for traction to keep from choking to death.

Questions are sure to be raised why Northup didn’t flee when given a chance during the errand runs, and other than the presence of patrollers or “pattyrollers” on horseback with treacherous hounds, the film does not delve into this matter.  Northup expends a lengthy discourse on the difficulties of escaping, the location in the bayous being the greatest impediment, though unlike the other slaves he could swim.  (Even so, there was a limitation to how far he could in order to get away from the scent-trailing hounds.)  NOT CLEAR

There were moments in the film where it might have been helpful to know how the family was faring and to what extent they knew what had happened to him.  In Parks’s version this is better explicated but it too stops short of noting, as Northup does in the narrative, that they knew he was in bondage from a letter delivered to them that he had written during the trip aboard the brig to New Orleans.

“12 Years a Slave” is a powerful film that is a dutiful primer on the slave experience, and while it is sure to be a   conversation starter, let us hope that many viewers will feel a  fierce urgency to now seek out not only Northup’s narrative, but hundreds of others to get the full picture of America’s nightmare and sin.