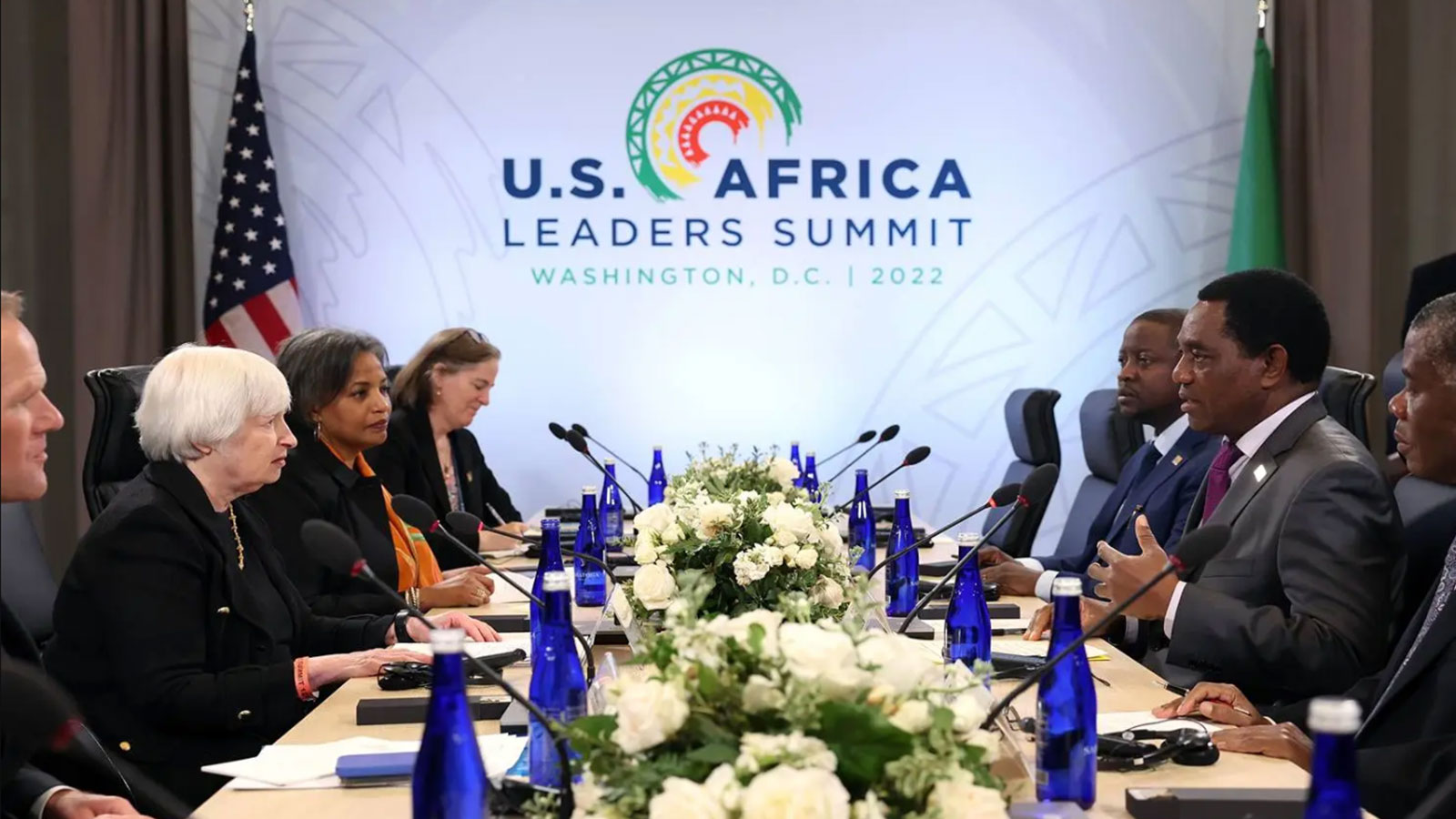 U.S.-Africa Leaders Summit: How to Avoid a New Scramble on the Continent

You Are Here: Home » Blog » Editors' Choice » U.S.-Africa Leaders Summit: How to Avoid a New Scramble on the Continent

African leaders must be more imaginative and proactive in pooling their efforts and setting the agenda.

At the conclusion of the Berlin Conference of 1884-85, which notoriously carved up the African continent and apportioned its territories to Europe’s imperial powers of the day, signatories to the act that formalized the new borders and zones of influence highlighted education and the “material well-being of the native populations” as justification for their historic power grabs.

Over the half century or so that followed what came to be known as the “Scramble for Africa,” Europe did virtually nothing to further education on the continent and inflicted some of the worst atrocities of the modern era on Africans, as colonists raced to extract natural resources using land seizures and forced labor, and implemented military conscription to fight and provide pack horse-like logistical support in Europe’s wars.

Most of what is recalled today about this terrible scramble are the arbitrary borders that created numerous economically crippled, landlocked territories and by turns divided members of coherent ethnic groupings and thrust together people with vast cultural differences or histories of enmity. Forgotten almost completely are the moral rationales that Western powers mobilized to justify their takeover and stewardship of an entire continent.

Much has been written lately about a new scramble for Africa that is supposedly underway, involving a growing list of outside powers. The list is led by China, the United States, France, and Russia, but also present are other parties that have less history of involvement with Africa but are now being drawn in, including Brazil, Japan, Malaysia, Saudi Arabia and other Gulf states, South Korea, Turkey, Vietnam, and others. All are seeking business opportunities on the continent positioned to drive most human population growth over the rest of this century—or more insidiously, are aiming to counter the influence of a global or regional rival.

Talk of a new scramble for Africa was strongly revived by last week’s U.S.-Africa Summit in Washington, the first since the Obama administration held one in 2014. U.S. press coverage has been peppered with allusions to a subtext for the event that was all but proscribed in the proceedings themselves but nonetheless seemed ever present in the minds of U.S. officials: how the United States can compete with China for influence in Africa.

Not everyone in Washington, it seems, got the memo that Africans don’t want to be lectured about distrusting the Chinese—or, even moreso, to be nudged in the direction of a coalition favoring one outside power over another. After a meeting on the margins of the summit with recently elected Zambian President Hakainde Hichilema, for instance, Republican Sen. Jim Risch, the ranking member on the U.S. Senate Foreign Relations Committee, tweeted: “I was honored to meet with @HHichilema – a strong leader & bright spot for democracy in Africa. HH is working hard to curb China’s malign & predatory influence in #Zambia, as well as increase cooperation with the US. I look forward to many years of continued partnership.”

China has not been alone as a target in the U.S. drive to build influence and limit that of rivals in Africa. While the Washington summit was underway, the Wall Street Journal ran a lengthy feature about Russian activities on the continent, which took as a given a Biden administration premise that after years of losing ground to others in Africa, the United States needed to push to rebuild its influence there. This time, using a longtime U.S. client state, Uganda, as an example, Russia was presented as the nemesis.

The problems with this sort of thinking, suddenly so ubiquitous, are multiple. Most importantly, few seem to have dwelled on the question of what the purpose is of building U.S. influence in Africa, a continent that has always placed at or near the bottom of the list of Washington’s global priorities. In a generic sort of way, the answers offered up by the Biden administration lately have a positive ring to them, but they don’t seem deeply connected to U.S. behavior, whether that be consistent diplomacy, support for democracy, major sustained foreign policy initiatives, or the engagement of the business community.

Moreover, as long as the question of what intrinsic reasons make Africa deserving of greater U.S. attention remains open, the only available answer returns us to the unsatisfyingly empty and potentially dangerous logic of the scramble: the continent is there, and others are gaining influence on it.

No one should expect the present scramble, such as it is, to play out anything like the historic one did, but that doesn’t mean it does not have great potential for serious harm. Seeking to lock down mineral wealth that is crucial for strategic frontier sectors, from batteries to mobile phones to nuclear power, before others can, or subjecting African nations to litmus tests about their support for foreign policy questions extrinsic to the continent—say, relations with Taiwan or Russia’s invasion of Ukraine—sustains the continent’s subordination to others.

Some of the answers to the question of how to break out of the patterns of the past lie in Africa itself, while others require a revolution in the mindsets of the global powers that are ramping up their drives for influence there. None will be easy.

First, Africa must find more effective ways to speak with one voice, or at least fewer voices. This is the unavoidable price of having been so severely Balkanized during the Berlin Conference nearly a century and a half ago. This will require engaging the outside world not as an entire continent made of 54 disparate and mostly small countries that have little economic or diplomatic leverage in the world, but instead making better use of regional diplomacy, including working through regional organizations such as the Economic Community of West African States, the East African Community, or the Southern African Development Community.

A baby step was made in this direction recently with the Biden administration proposal that African countries receive permanent representation in the G-20. Almost simultaneously to this, Senegal’s president, Macky Sall, told the New York Times that Africa is seeking not one but two seats on the U.N. Security Council. The practical and political obstacles to this proposal are many, making it something that is unlikely to occur anytime soon, if ever, but it is good to see this level of plain-spoken ambition. Africa’s history of subjugation and exclusion require a radical reconsideration of the way it is represented in global institutions. If that is not enough, its population, which amounted to less than one-tenth of the world’s population in 1950, will account for 40 percent of humanity by the end of the century, according to U.N. predictions—lending still inadequately recognized urgency to this question.

Even more fundamental, perhaps, than learning to speak with fewer voices, is that African countries must somehow become much better drivers of the agenda of their international engagement. More of the priorities should come out of Africa itself, which should mean less acceptance of more or less off-the-shelf plans from outside powers, whether that means Chinese infrastructure, U.S. “capacity building,” or other forms of engagement that favor nongovernmental organizations and civil society.

Critically, in these cases, as well as with Russia’s burgeoning security presence on the continent, most of the funds flow back to the outside power. Taking greater charge should also mean pushing for conventions around borrowing, lending, and debt so that the continent is less at the mercy of practices defined by Washington—or the international financial institutions the United States has traditionally dominated—or Beijing or someone else.

This is already asking a lot, but if Africa is to cease being a ward or stepchild of the international system, its leaders are going to have to be much more imaginative and proactive in pooling their efforts and setting the agenda.

For the United States, suddenly fearful of being left out amid the attention to Africa, the best way to convince Africans of its interest is not through the tired and overused formula of big summits, a patronizing form of African convocation invented by the French long ago and eagerly embraced more recently by China. Quiet and steady engagement is better.

The tools for doing so are not sitting obviously on the shelf, but in economics. The United States must get its companies more involved on the continent in ways that are less centered on extraction of oil and minerals and more focused on manufacturing and knowledge-based industries, of which Africa is in desperate need. It is not clear that Washington has the diplomatic energy or bandwidth to do this, but more frequent, high-level engagement with the continent, including at the presidential level, is an important gauge of seriousness. One useful course of action might be having industrialists fly with U.S. President Joe Biden on bilateral visits to African countries to strike business deals that move away from mining and pumping oil.

Many of Africa’s topline needs are obvious. As I have written elsewhere, the continent is urbanizing at a pace and scale never seen before, but too many of its cities are chaotic, unplanned messes. Housing construction on a massive scale, as well as figuring out financing by leveraging pensions, insurance funds, and revenues from extractive industries, are ripe areas for doing well by doing good.

By 2050, about 40 percent of the people under the age of 18 will be African. Stop and read that again, and if you don’t see that as an enormous market for education, something is not right. The West has a choice between bemoaning African migration—which, given demographic trends, will inevitably grow significantly in the decades ahead—or trying to get ahead of the curve by forming educational partnerships on a continent desperate for more and better schools and universities and the knowledge-based jobs that can flow from them.

So far in this scramble, with countries driven by their search for influence, nobody has emerged looking very good. Maybe it is time to be driven by something else.

Howard W. French is a columnist at Foreign Policy, a professor at the Columbia University Graduate School of Journalism, and a longtime foreign correspondent. His latest book is Born in Blackness: Africa, Africans and the Making of the Modern World, 1471 to the Second World War. Twitter: @hofrench