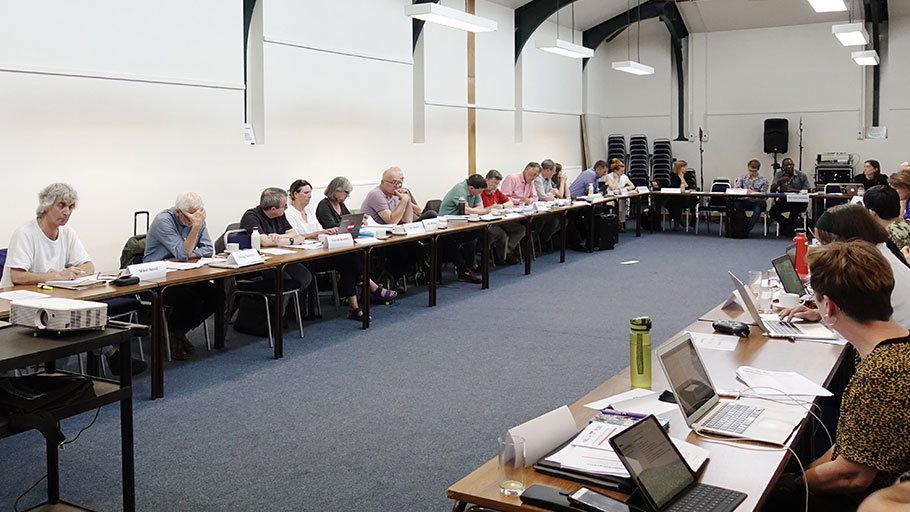 By Trade Unions for Energy Democracy —

On July 9-10, 2019, unions and allies in the UK came together in Manchester for a two-day working meeting. Titled Energy Transition and Economy-Wide Decarbonisation, the meeting carried forward recent discussions on how unions and close allies can work with the Labour Party to shape its commitments on extending public control over the power sector, and the Party’s strategy for decarbonisation. The event built on discussions at the previous year’s TUED meeting in Sheffield, England.

The Manchester meeting took place against a backdrop of mass student demonstrations for climate action as well as “climate emergency” declarations by the UK parliament and scores of city councils. Participants in the meeting included representatives from 15 UK trade union bodies, Labour Party staff and advisors working around energy, transport, and community organizing, and more than 20 close allies from research, policy advocacy and campaigning organizations in the UK and beyond. The full program is available here, and the list of attendees is here. 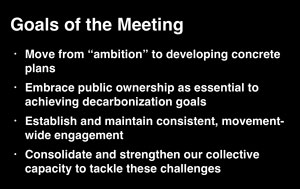 In opening the meeting, TUED Coordinator Sean Sweeney noted that many UK unions and the TUC formally support public ownership of energy. They also generally support the need for rapid decarbonization of the economy. However, he noted that unions—and key environmental organisations—could do a better job in showing that public ownership and decarbonisation are in fact inseparable. “Climate targets,” said Sweeney, “simply will not be met if energy systems are not comprehensively reclaimed to public control.” Sweeney emphasized as goals for the meeting the need for: moving from calls for ever-greater “ambition” to developing concrete plans and programs; embracing public ownership as essential to achieving decarbonization goals; establishing and maintaining consistent engagement with these issues across the labour movement; and consolidating and strengthening our collective capacity to tackle the immense technical challenges that must be faced.

Additional contributions highlighted significant developments in trade union policy, including recent declarations of a “climate emergency,” and efforts to advance left visions of the Green New Deal. The 45-person meeting then analysed the Labour Party’s May 2019 document, “Bringing Energy Home,” which outlined Labour’s plan to renationalise transmission and distribution systems for electricity and gas.

The Party proposes to set up a new National Energy Agency that would oversee Regional Energy Agencies. Support would be extended to municipal and local bodies that might be in a position to accelerate the process of decarbonisation. The new structures would be driven by a common mission, namely, to put the UK’s energy system on track to achieve “net zero” emissions within time frames that are consistent with the science.

UNISON argued that retail and customer service operations should also be brought under public ownership. PCS noted that Party policy has made accommodations to “community energy” but this had to be thought through. TUED’s Sweeney provided data on the crisis of the renewables sector, and how falling prices for renewables are actually bad news in terms of making profit—but decidedly good news in terms of making arguments for full public ownership. 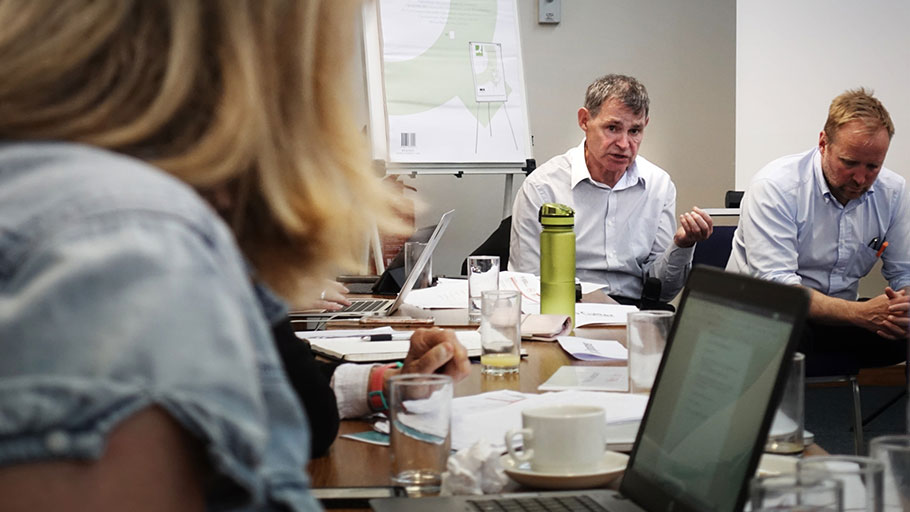 The next session, “Build it Here,” focused on the ongoing struggle of workers at the BiFab yards in Fife, Scotland, to secure jobs fabricating jackets for wind turbines (slated to be deployed off the Scottish coast near the yards). GMB’s Scotland Secretary Gary Smith reported that the failure to create jobs in the renewables sector had created anger and resentment in working class communities across Scotland. Michael Sullivan, the GMB’s convenor at BiFab, pointed out the non-UK companies like EDF had pocketed generous subsidies but workers in Scotland have seen little or no benefit. The Scottish TUC has produced a study that documents the broken promises made by companies and politicians regarding job creation in offshore wind. (For more details on the BiFab workers’ ongoing fight, please see here.)

The final session on day one, titled “Technologies and Transition,” focused on issues and technologies involved in the energy transition beyond the power sector, and in particular around the decarbonization of industry and the built environment. Led by Bill Adams, the TUC Regional Secretary for Yorkshire and Humberside, the discussion explored challenges involved in meeting the UK’s home heating requirements, the rise of fuel poverty under neoliberalism, and the considerable gaps in both knowledge and skills that deep decarbonization of these sectors must address. In Northeast England, unions and some companies (such as Drax) have been partnering on the challenges of energy transition in carbon intensive industrial processes.

Crucially, there was broad recognition that such programs cannot be done on a piecemeal or “outsourced” basis, but require a comprehensive, integrated, centrally planned program in order to have any chance of success.

There were impassioned pleas for broad recognition across the movement that meaningful progress towards addressing historically entrenched racial, gender and other inequalities seems unlikely to be made without a firm embrace and bold pursuit of public ownership. 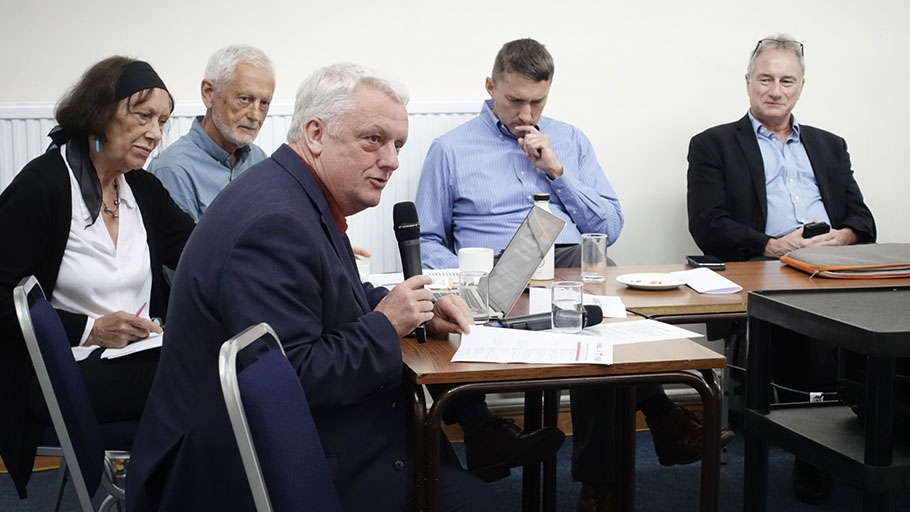 Day two opened with a session on “The Challenge of Transport.” TUED’s John Treat gave an overview of TUED’s Working Paper 12, The Road Less Travelled: Reclaiming Public Transport for Climate-Ready Mobility, published in May 2019. The paper reviews transport-related energy and emissions trends and the inadequacy of existing transport decarbonization commitments and policy approaches. It also debunks some myths and misunderstandings regarding the place of electric cars in decarbonizing road transport, and argues for an ambitious embrace of publicly owned, integrated, decarbonized public transport systems in providing sustainable mobility that serves the needs of working people.

Next, Dr Ian Taylor, transport policy adviser to Andrew McDonald MP, Labour’s Shadow Secretary of State for Transport, highlighted that the UK’s transport sector is the country’s worst performing in terms of reducing emissions, but that there is tremendous potential to turn this around: If public transport can be brought back under public control and liberated from the drive for profits, then dramatic improvements in low-carbon public mobility are possible.

Additional contributions emphasized the need to reduce the requirements for mobility of people and goods, and to design transport systems to be suitable to meeting the daily needs of working people, as well as exploring questions around the challenges involved in organizing informal workers.

Energy in Europe: The Failure of a Success Story

The next session, titled Continental Shift, looked at the current crisis of the EU’s energy and climate policy, with special attention to the ways in which the concepts of community energy and “energy citizenship” are shaping EU policy debates while possibly leaving unaddressed important questions about how such efforts can be expected to fit into competitive electricity markets dominated by major commercial players. Sean Sweeney presented important data on the collapse of growth in new investment in renewable energy sources in Europe, which TUED has analyzed in considerable detail (see for instance here). 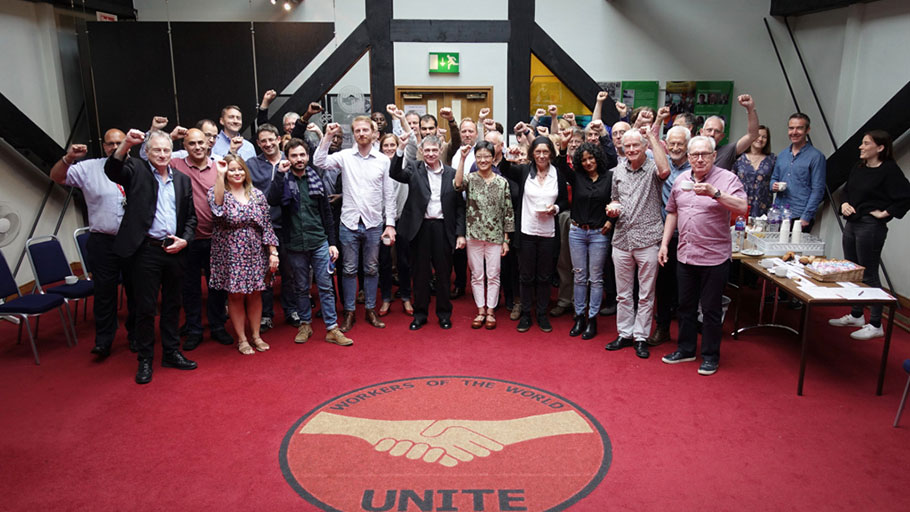 The meeting was co-convened by Trade Unions for Energy Democracy, the Global Labour Institute UK, and the Rosa Luxemburg Foundation’s Brussels office. The meeting took place at the historic Mechanics Institute, birthplace (in 1868) of the Trades Union Congress (TUC).