Wealth Belongs To All Of Us – Not Just To The Rich

You Are Here: Home » Editors' Choice » Wealth Belongs To All Of Us – Not Just To The Rich 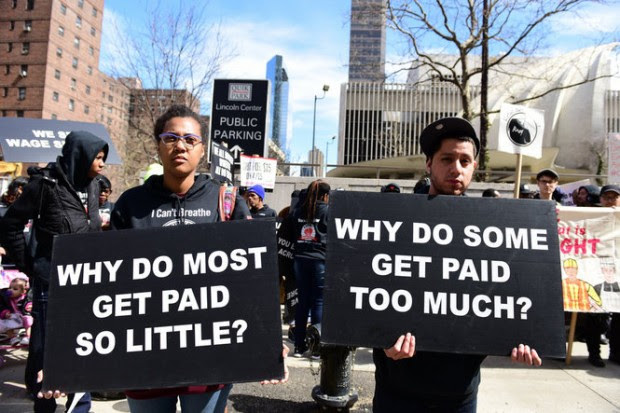 Like Bill Gates, George Soros, Warren Buffett and H. Ross Perot, but not as lofty, I was once called a “self-made man.” I was an entrepreneur who had co-founded over forty businesses in my career and had accumulated wealth that put me well within the top 0.01 of 1%. If people had something good to say about me, they would say I was a “marketing genius” and that I had the “Midas touch”; everything I touched turned to gold.

One afternoon I was signing some paychecks when I noticed how many people would only be paid  $20,000 in a year. I would “earn” the same amount in an hour. Why me? Was my effort really worth that much more? Wasn’t I really the same person that had worked as a janitor while attending college? Being a CEO and co-owner of a business certainly wasn’t any harder or riskier than being a janitor; if anything, being the boss left a lot more time for fun.

The truth of how the system works became startlingly clear to me one day. We had been planning to convert a golf course from public use to member-only private club status. With an immediate profit of $15 million and a total profit of $45 million over some decades, we were going to have to pay a lot of income tax. Like General Electric or Apple or most every big company, we didn’t want to pay any tax if we could avoid it. Studying the 76,000 page IRS Tax Code, our tax lawyers found a specific interpretation that would create an exemption for our private club. The whole transaction would be tax free. My wealthy forbearers  had gone before me and rigged the system, enabling me to avoid $15 million in income tax. The US taxpayers – ordinary people – would have to make up the shortfall.

As I reflected on this I found that everything I had was a gift of the system. First of all, I was a white male, with all the privilege that comes with that. I received a free education from a world-respected university paid for by the taxpayers of California (education used to be free in California). I even had a mother that could lend me a year’s wages to start one of my first businesses. I had cities and counties that would give me zoning and permit entitlements to turn a few hundred thousand dollars of raw land into hundreds of millions of dollars of recreational community subdivisions. I traveled on roads I didn’t pay for and used the country’s legal system to bash competitors before they could start. I was not just the inheritor and beneficiary of the rich people that had gone before me, of those that had skewed and rigged the rules and prepared the way, but also of every single person that had allowed it to happen. My fortune was built from riches plundered from the earth and watered by the blood, sweat and tears of everyone that helped to make me rich, not just my employees, suppliers and customers, but the whole society.

The thank you is sincere but it might sound a bit hollow to your ears. Thank you doesn’t really seem like a lot to say when you have accumulated hundreds of millions of dollars and most people have very little money to fall back on. Imagine eating at a sumptuous private banquet every night that the whole society has paid for, while most people are too stressed from overwork and worry to do more than grab some fast food on the way home and others can only hope to find some moldy food in a dumpster. There is no fairness in that. No equality. No justice. Indeed, it is shameful.

Recognizing that the wealth was created by the society, not by me, meant that I held riches that were not mine but belonged to the people and to the Earth. My first reaction was guilt, but all that did was make the thousand dollar bottles of wine go down faster. My second reaction was sorrow and eventually that made me change my life. I couldn’t go on as I had. I turned my back on wealth. I lost it, I spent it like water and finally I gave it all away. I have never been happier.

There are two lessons I have learned.

The first is that some rich people will give the wealth back. Hundreds of very rich people have already signed pledges to give half of all their wealth away when they die. Some, like me, have already returned 100% of their fortunes. Many more can.

The second lesson is that the great concentrations of wealth come from the society. The society creates it. The society can un-create it. Thousands are organizing for change already and many more will. We have to because the concentration of wealth is reaching levels unheard of since the Gilded Age and the Great Depression. Twenty Americans now own equal to half the people. The result is that one American is dying from poverty related factors every 36 seconds. The cries of the people go unheard in a government ruled by the rich few. The desire of the people to confront environmental and social justice problems counts statistically for zero in a Congress that has been controlled by the wealthy for decades. The very life of the planet is in jeopardy. The stranglehold of unfettered extreme wealth must be eliminated. The wealthy must share.

The wealth of the rich derives from the society; it is the product of the people. The rich control the media, the schools and universities, the health system, the courts, the police, the military and certainly the government. But we are the schoolteachers, the policemen, the students, the soldiers, the journalists, the mechanics, the book-keepers, the lawyers and the farmers…the rich rely on us. They rely on our cooperation. They are nothing without us. As Martin Luther King said, “a man can’t ride your back unless it is bent”. It is time to stand up. We all can share the wealth.

Dariel Garner was a member of the wealthiest 0.01 of 1%. He is the inspiration for Billionaire Buddha, a novel by Rivera Sun about a man who had incredible riches, turned his back on wealth and found everything worth living for. He speaks, holds workshops on wealth and income inequality and blogs at riverasun.com. You can reach him by email at dariel@riverasun.com.

A Slice of the Confederacy in the Interior of Brazil

A Slice of the Confederacy in the Interior of Brazil
We Need Your Support — Donate, Share, Sign-Up Ways to Support