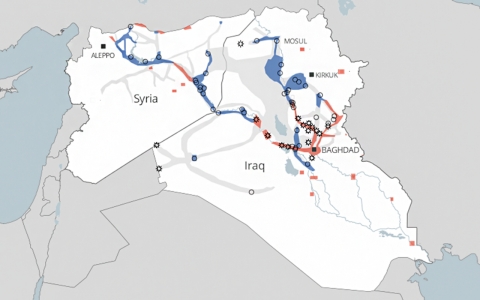 Why Islamic State poses a mortal challenge to Al-Qaeda

You Are Here: Home » Blog » Editors' Choice » Why Islamic State poses a mortal challenge to Al-Qaeda

In the past 13 years, Al-Qaeda has never managed to produce anything close to the spectacular strikes of Sept. 11, 2001 that triggered President George W. Bush’s war on terrorism. Years of relentless targeting by the U.S. and allied intelligence agencies have relegated it to the sidelines of history and reduced the movement’s core to a shadow of its once menacing image. As Barack Obama’s administration launched its own war on terrorism in a speech on Wednesday night, its target is not the network created by Osama bin Laden, but the upstart Islamic State movement that now controls huge swaths of Syria and Iraq.

Al-Qaeda and the Islamic State (IS) are not the same thing, even if they share the same roots. The Islamic State’s indiscriminate slaughter of fellow Sunni Muslims prompted Al-Qaeda leader Ayman al-Zawahiri to formally cut it loose earlier this year, but the IS is also pursuing a different strategy from Al-Qaeda, targeting enemies in its immediate neighborhood rather than the U.S., seizing and holding territory instead of confining itself to the hit-and-run tactics of its predecessor. Spurning Zawahiri’s claims to leadership, IS leader Abu Bakr al-Baghdadi has declared himself the one true caliph and demanded that Al-Qaeda’s own followers yield to his authority.

If Western and allied pummeling had left it on the ropes, the knockout blow to Al-Qaeda — perhaps ironically — just might come from like-minded extremists. But that outcome is far from certain.

Analysts say the Islamic State has created a center of gravity for a new generation of radicalized young men across the globe, who have swarmed in record numbers to join the fight in Syria and Iraq. Many of those fighters were children when the 9/11attacks took place. In their eyes, Al-Qaeda is little more than a shadowy conspiracy; the Islamic State is a virile army with an address and a track record of success.

Optimists in the West perceive a silver lining in all this: the Islamic State’s ability to channel funds and recruits towards a project quite different from Al-Qaeda’s. Whereas Bin Laden focused on conspiracies to attack “the far enemy” in the West, the Islamic State seeks regional conquest, building a proto-state in the power vacuums left by the crumbling states of Syria and Iraq.

Analysts say Al-Qaeda now faces a splintering of its core supporters. Writing in Foreign Policy, Intelwire founder J.M. Berger said the very coherence of the Al-Qaeda network was in jeopardy: “This kind of dynamic has the potential to seriously weaken the global jihadi movement, moving it from a state of relative cohesion into factions that increasingly compete for resources and support and maybe spend a significant time killing each other instead of attacking their ostensible enemies.”

That hasn’t begun just yet, however. Researchers say Al-Qaeda’s leaders, wherever they’re hiding, half-expect the challenge of the Islamic State to run its course. They are betting the breakaway group will buckle under a new U.S.-led offensive, suffocate under economic blockade from its hostile neighbors, or even succumb to popular uprising from local Sunnis chafing under its brutal approach to governance.

The nature of the Islamic State–Qaeda rivalry has also been misunderstood, analysts say. For all its new foreign recruits, the IS has had limited success in luring fighters away from the main Al-Qaeda affiliates in North Africa, Yemen, or Somalia. Many of them have praised the group’s audacity, but few big names have pledged allegiance to Baghdadi, fearing their mutiny might cause splintering within their own cells.

The competition for funding might also be overstated, said Aymenn Jawad al-Tamimi, a fellow at the Middle East Forum in Washington, D.C. Al-Qaeda relies heavily on foreign donors in the Gulf, but the Islamic State is largely self-sufficient on its black-market oil exports, racketeering and taxation. Any donations from abroad are a bonus.

“There’s a tendency to characterize the global trend as firmly in favor of the Islamic State, but I don’t think it quite points either way yet,” Tamimi said.

Historical precedent may, in fact, favor Al-Qaeda. In the 1990s, the Armed Islamic Group of Algeria took over a wide expanse of the country, piggybacking on local resentment of the central government (as the Islamic State has done in Syria and Iraq). But once Algerians found themselves on the receiving end of the armed group’s ultra-violence, they rebelled and welcomed Algerian security forces back into their villages. The same could happen in Iraq, said Dalia Ghanem-Yazbeck, an expert on extremist violence in Algeria at the Carnegie Middle East Center in Beirut.

“If tomorrow the Islamic State is fiercely fought in Syria and Iraq and loses central positions, everything will fall apart like a house of cards and the ‘great caliph’ Baghdadi will lose his legitimacy,” Ghanem-Yazbeck said.

Should the Islamic State hang on against these steep odds, however, analysts say the rift with Al-Qaeda will only deepen. In that event, Berger raised the most feared possibility: Al-Qaeda, sensing urgency to reassert its relevance in the face of the IS challenge, might try to reprise its hallmark “big shot” attacks on the West — another 9/11 even.

The IS, after all, has already succeeded in undercutting Al-Qaeda’s raison d’être by brazenly confronting the West. “For some supporters of the global jihadi movement, it must surely look like Zawahiri is cowering while Baghdadi flexes his muscles in the most public way imaginable, overtly daring the United States to come to Iraq and fight his forces,” he wrote.

Those who feel IS could turn out to be a flash in the pan say another 9/11 is hardly necessary for Al-Qaeda’s survival. That may be beside the point if striking the West remains outside the group’s capabilities. “A coup like 9/11 is dependent on so many variables, including sheer luck,” noted Olivier Roy, an expert on political Islam and a professor at the European University Institute in Italy. “So it’s very difficult to assess the real level of threat.”

Zawahiri, for his part, has been suspiciously silent on Baghdadi’s brazen challenge to Al-Qaeda supremacy, but there’s evidence he is feeling insecure about the direction of his movement. In a video last week, Zawahiri announced the formation of an Al-Qaeda branch on the Indian subcontinent, an expansion several years in the making but one that was conveniently timed to draw the limelight back onto Al-Qaeda, if only for a brief moment.

With everything in flux, the Al-Qaeda core seems intent for now on plotting a cautious course, fearful of stoking a more public feud. Zawahiri and his commanders will hope that religiously binding pledges of fealty — bayat — between Al-Qaeda affiliates and up the command structure hold strong. According to Berger, these oaths are a linchpin “holding the global Al-Qaeda network together at this stage.”

A shift in momentum or even a change in leadership, however, and all bets would be off. Should Zawahiri be killed – or, at age 63, die of natural causes — certain affiliates would see a window to opt out of renewing bayat to Zawahiri’s replacement and sign on with Baghdadi. On the other hand, should Baghdadi fall casualty to the U.S.-led offensive, his own fragile project could unravel.

It’s worth noting that many were swift to pronounce Al-Qaeda dead when a team of Navy SEALs took out its leader and the architect of the 9/11 attacks, Osama bin Laden, in a 2011 raid. The network continued to operate, however, a credit to its diffuse leadership structure. The U.S. may have successfully contained Al-Qaeda, but eradicating the organization altogether is another feat entirely.

The accession of the Islamic State — a challenge from within rather than without — however, poses new questions about the survivability of a post–bin Laden Al-Qaeda. On Islamic religious grounds, on the basis of their mutually exclusive claims of supremacy, Tamimi said, “this kind of thing ultimately isn’t sustainable.”