Should Drugs Be Legalized to Stop the Violence and Killing in Black Communities?

You Are Here: Home » Initiative Posts » War on the “War on Drugs” Posts » Should Drugs Be Legalized to Stop the Violence and Killing in Black Communities? 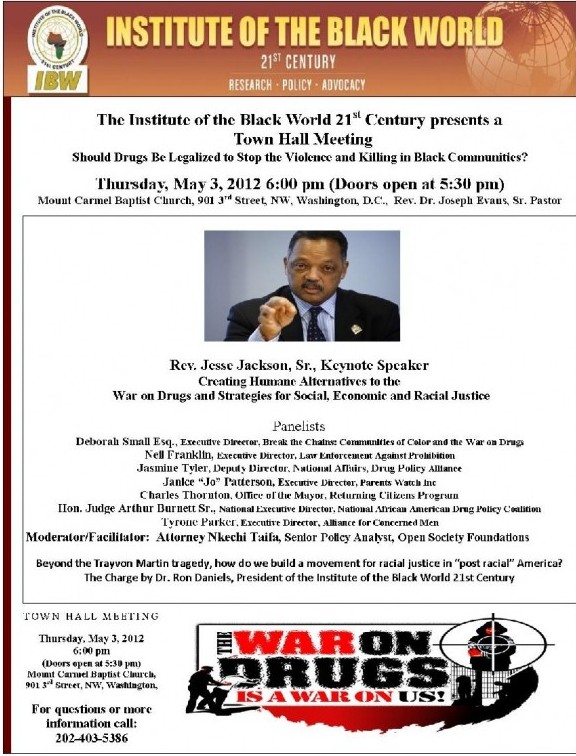 Dr. Ron Daniels, President of the New York based Institute of the Black World 21st Century (IBW), announced today that the organization is intensifying its efforts to end what he describes as a “racially- biased” War on Drugs by holding Town Hall Meetings in Washington, D.C., Pittsburgh, PA and Baltimore, MD in the next few weeks.  President Richard M. Nixon launched the War on Drugs 41 years ago to halt the trafficking of illegal drugs in the U.S. But, Dr. Daniels and many drug policy reform advocates believe it has had a destructive impact on Black communities across the nation. Dr. Daniels states, “Black communities have been the primary target for selective policing practices that have resulted in the mass incarceration of millions of Black people. Families have been disrupted and communities devastated by a racist strategy. A major goal of the Town Hall Meetings is to increase public awareness of what our young brothers and sisters call a ‘War on Us’.”  IBW is among a growing number of organizations demanding that drug abuse and addiction be treated as a health crisis rather than criminal justice matter. IBW has also called for a National Dialogue on whether drugs should be legalized to stop the violence and killing associated with the illicit trafficking in Black communities. The background/history and impact of the War on Drugs on Black communities will be addressed by Keynote Presenters at each of the Town Hall Meetings.