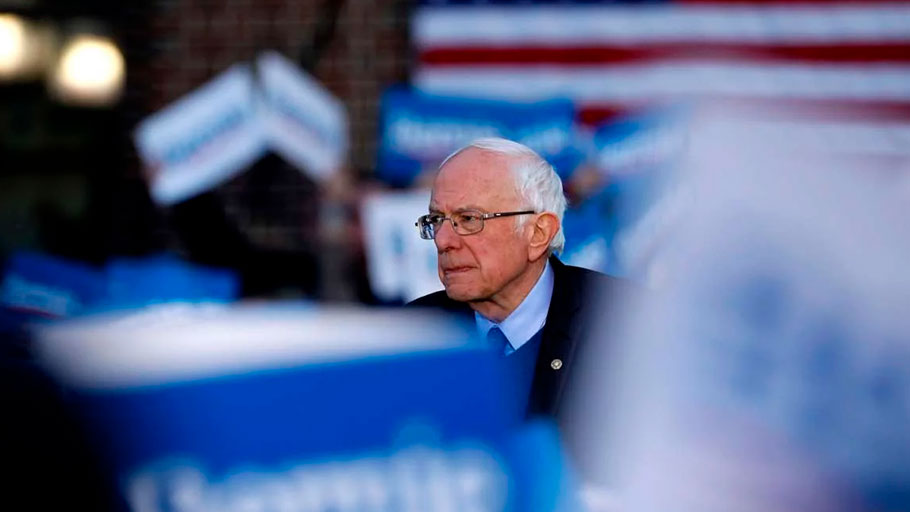 Another bad night for Sanders leaves his campaign with limited options

You Are Here: Home » Blog » News & Current Affairs » Another bad night for Sanders leaves his campaign with limited options

Democratic presidential hopeful Vermont Sen. Bernie Sanders addresses supporters during a campaign rally in the Diag at the University of Michigan in Ann Arbor, Michigan, on March 8, 2020. Jeff Kowalsky / AFP via Getty Images.

Reports of the Sanders campaign’s demise are exaggerated, at least for now, but not by much.

The March 10 primaries were not a complete wipeout for Bernie Sanders and his presidential campaign. He secured a win in North Dakota and clings to a slim lead in Washington State. For the Vermont senator, the good news ends there.

Joe Biden won four of the six states in play on Tuesday with Washington State still outstanding, along with the lion’s share of delegates. The anticipated aria from the Democratic establishment and the “news” media — “It’s time for Bernie to go” — has begun in earnest. Sanders, for his part, made no public statements after yesterday’s votes.

Biden’s win in Michigan is important for both practical and symbolic reasons. The state enjoyed the largest delegate prize of the night, and Biden’s margin of victory there — approximately 15 percentage points — will translate into a significant delegate haul. In 2016, Sanders’s surprise victory in Michigan reinvigorated his campaign, but the districts and demographics that elevated him then abandoned him last night.

Biden won Mississippi by a staggering 67 points. He won in Missouri by about 25 points. Those margins mean his delegate lead over Sanders has widened significantly. Even if Sanders does eventually win Washington State, the margin will be slim, and the delegate count will be comparatively insignificant.

Biden still remains a far cry from the 1,991 delegates needed to secure the nomination, but the math has grown decidedly grim for Sanders going forward. Florida, Ohio, Illinois and Arizona hold primaries in a week, with more than 600 delegates on the line. Sanders lost all four of those contests in 2016, and it seems unlikely he will prevail in any of them this time. Once those delegates have been tallied, more than 60 percent of the overall delegates will have been banked, and then comes the Georgia primary and another likely Biden southern-state win.

In Mississippi and Missouri particularly, Biden’s support among voters of color was again overwhelming. Perhaps most damaging of all for Sanders, however, is the fact that turnout among younger voters — a lynchpin to his campaign strategy — once again failed to rise to the levels he requires.

Young voter turnout dropped by nearly 10 percent in Michigan compared to 2016, and the same held true across many of the other states yesterday.

Younger voters significantly support sweeping change in the face of climate disruption, student debt, the commodification of health care, and other issues, all of which lie at the core of the Sanders campaign’s platform. On the eve of Tuesday’s vote, young people in Ann Arbor, Michigan, turned out by the thousands to cheer Sanders on as he vowed to improve their lives, just as they did before Super Tuesday.

Yet young voter turnout dropped by nearly 10 percent in Michigan compared to 2016, and the same held true across many of the other states yesterday. This gulf between the noise at the rallies and participation at the voting booth will likely make future campaigns exceedingly leery of basing any campaign plan on young voter turnout. People thought it would be different this time. According to the numbers, people were wrong.

It is easy enough to heap scorn upon younger voters for their failure to show up. Such criticism, however, must be tempered by the fact that polling places in Ann Arbor and other youth-heavy Michigan precincts were burdened with lines and waiting times that lasted for several hours. Long lines had also manifested themselves in youth-heavy areas in Texas on Super Tuesday, primarily in Austin. Similarly long lines to vote also appeared in North Dakota yesterday.

“At a time when Democrats correctly attack Republicans for voter suppression,” said the Sanders campaign in a Tuesday evening statement, “it is disappointing to see people standing in long lines for hours today waiting to vote in Michigan and around the country. People should not have to miss a day of work to exercise their right to vote. This is an outrage.”

Long lines are undeniably an outrage, perhaps indicating a concerted effort by the party to aid Biden, but long lines alone do not explain what has been taking place in the 10 days since the South Carolina primary. The Biden campaign, all but dead and buried after the Nevada Caucus, has staged what amounts to a nine-run rally in the middle innings. His support among a broad spectrum of voter demographics, combined with underwhelming turnout among Sanders’s core supporters, has changed the race for the Democratic nomination with astonishing speed.

The nomination fight is not over yet, but Sanders’s path to ultimate victory has grown forbiddingly narrow.

The nomination fight is not over yet, but Sanders’s path to ultimate victory has grown forbiddingly narrow. The delegate math, already bleak, promises to grow worse for Sanders after next week. For all that, I suspect Sanders will remain in the race until at least the end of this coming weekend, so he can participate in the debate in Arizona on Sunday night.

It will be just Sanders and Biden on the stage, with no interruption-happy audience due to coronavirus concerns. If Sanders hopes to reassert himself in this race, a knockout debate performance against Biden would seem to be his last, best hope. “I can’t imagine him dropping out without getting his chance to get this guy one on one in a debate,” a Sanders aide told Politico before Tuesday’s contests.

It is a slim hope at best, given the slate of contests to come, and it is entirely possible Sanders could do little more than damage Biden’s chances against Donald Trump even as his own prospects slip below the water line in the following primaries. If he remains in the race past any mathematical hope, it will be war within the ranks of the party. It is a concern the Sanders campaign is undoubtedly taking into account as its members consider their options going forward.

“I’m not a masochist who wants to stay in a race that can’t be won,” Sanders told George Stephanopoulos during Sunday’s broadcast of This Week on ABC. “But right now, that’s a little bit premature.” Readers of political tea leaves took this as an indication that Sanders will not continue his campaign if there appears to be no remaining hope. Given these two factors — Tuesday’s results vs. the upcoming Arizona debate — it seems likely Sanders will hold off on making any immediate decisions.

Reports of the Sanders campaign’s demise are exaggerated, at least for now, but not by much. The next few days will tell the tale. Sanders may choose to stay in through the debate, and even through next week’s contests. For all we know, he may choose a completely different course, join with Elizabeth Warren in a dramatic dual endorsement of Biden, and step away from the race tomorrow. Sentimental postmortems can wait, because there is no mortem yet. Soon, perhaps, but not yet.

William Rivers Pitt is a senior editor and lead columnist at Truthout. He is also a New York Times and internationally bestselling author of three books: War on Iraq: What Team Bush Doesn’t Want You to Know, The Greatest Sedition Is Silence and House of Ill Repute: Reflections on War, Lies, and America’s Ravaged Reputation. His fourth book, The Mass Destruction of Iraq: Why It Is Happening, and Who Is Responsible, co-written with Dahr Jamail, is available now on Amazon. He lives and works in New Hampshire.