Beyond Drones and Stop-and-Frisk

You Are Here: Home » Blog » Initiative Posts » War on the “War on Drugs” Posts » Beyond Drones and Stop-and-Frisk 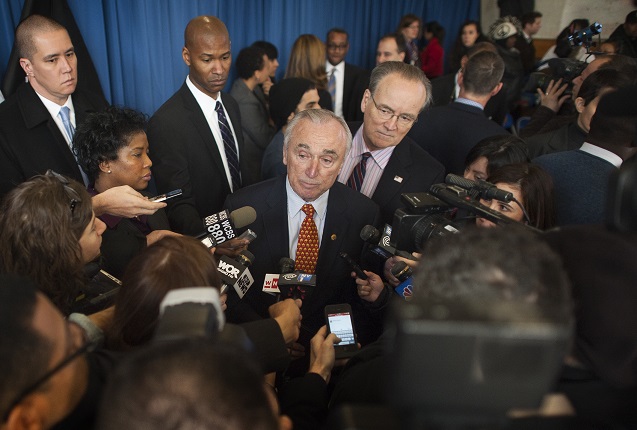 This week, the NYPD reported a 13.2 percent increase in shootings across the city since January, compared to the same time frame last year.

The New York Post dutifully implied that the spike in gun violence stemmed from the end of the city’s racial stop-and-frisk policy, quoting “a source” that said the NYPD was now a reactive force that was “all peace and love and joy . . . ”

The raw data out of the NYPD fits easily into a right-wing narrative: Arbitrary stops of brown and black people go down and gun violence goes up, and the right now has a rhetorical tool to bat down leftist concerns for basic human dignity.

Nevermind that the rate of guns recovered via stop-and-frisk in 2011 was 1 in 879, or less than 1 percent. But even so, NYPD Police Commissioner Bill Bratton – who advocates a more “selective” type of stop-and-frisk – probably isn’t as fazed by the shooting data as you might expect, considering what else he has up his sleeve.

Last month Bratton told the Daily News that he was “supportive of the concept of drones,” and the article went on to speculate that any future use of drones could happen in conjunction with gunshot detectors:

“The NYPD has already budgeted $500,000 for a pilot program to test gunshot detectors . . . [NYPD head of intelligence John] Miller said the gunshot detection system could be tied in with cameras  –  which could include drones  –  to give cops a photograph of a shooter.”

These drone-assisted surveillance systems would no doubt be installed in such places as Central Harlem and Bedford-Stuyvesant in Brooklyn, where gun violence has occurred more often in past years and where stop-and-frisk was most problematic. Their installation would be part of a renewed focus of police nationwide on gun violence, mostly on “hot spots” clustered in low-income neighborhoods. A report from the Bureau of Justice Assistance affirms that the federal government has been shepherding these efforts with grants in certain cities since 2009.

Those hot spots are largely determined based on existing data for where crime occurs – in other words, they’re places where crime is predicted to happen because it happened there before. That’s the conceptual basis for the much-ballyhooed tactic of “predictive policing” currently in place in Los Angeles, Chicago and other cities.

Bratton is the mind behind all forms of data-driven policing and the ideology underpinning it. During his first term as NYPD Police Commissioner, he put into practice the broken windows theory of policing that holds “zero-tolerance” for urban crime – no matter how lowly – and led the development of CompStat, an effort to aggregate all information on crime in the city and use it for enforcement. CompStat and its variations across the country were the predecessors of the newest iteration of data-driven enforcement, predictive policing.

The leap forward into the predictive model was, again, led by Bratton. In 2007, when he was Police Chief of the LAPD, he applied for a grant that would help his precinct implement a model of forecasting crime originally used by the military to track insurgents in Iraq. Although he left the LAPD shortly before it was awarded the grant, the city became a test-lab of predictive policing for the private company behind the concept: PredPol. The SF Weekly reports that, despite inconclusive evidence of its software’s effectiveness, PredPol’s lobbyists were able to leverage the company’s go-around in Los Angeles to win contracts that compelled other precincts to “provide testimonials, as requested by PredPol” and “provide referrals and facilitate introductions to other agencies who can utilize the PredPol tool.”

Predictive policing is marketed as a proactive way to combat crime. Drone-based gunshot detective systems, like the ones Bratton is eyeing for the NYPD, are reactive. But they’re two heads of the same tactical coin, as lobbyists for PredPol acknowledged in a July 17, 2012, City Council meeting in Columbia, South Carolina, according to the minutes:

“Dr. Donnie Fowler [PredPol lobbyist] stated that shot spotters can work with this system to help law enforcement. A shot spotter is reactionary and requires the installation of microphones.

Police Chief Randy Scott said that this is just another layer to assisting the police with predictive policing.”

It isn’t a coincidence that the LAPD, ground zero for predictive policing, sent eight of its officers to visit Israeli drone manufacturers and surveillance companies this past February, where they marveled at tools for social control like children in Willy Wonka’s chocolate factory.

“There are several things on the wish list, but we did like Sky Sapience [a drone maker]  –  that was incredible,” LAPD Deputy Chief Jose Perez told the Jewish Journal. Other officers on the trip gushed over Israeli companies whose services were integral in the National Security Agency’s notorious phone wiretapping program.

It was Bratton who began cultivating the LAPD’s chummy relationship with Israel’s military-surveillance industrial complex, and this past May, he returned to Jerusalem to champion “the prevention of crime” at the Israel’s National Conference on Personal Security.

“The new revolution of policing, the new era, is called predictive policing,” he announced in a keynote address. “It’s one of the reasons I came back into policing in New York City, because I want to be part of that new revolution.”

In addition to being predictive policing’s most prominent advocate, Bratton also sat on the board for Shotspotter, which develops and sells gunshot detection technology, until he left to return to his old job at the NYPD in January. Last fall, according to The New York Times, mayor-elect Bill de Blasio said on his campaign website that he intended to invest in Shotspotter’s technology for “high crime areas.” Those areas will inevitably be the same predominantly black and Latino neighborhoods where stop-and-frisk was such a problem and where police are now targeting subway dancers, turnstile jumpers and homeless people for arrest.

Josmar Trujillo, who organizes the grassroots activist group New Yorkers Against Bratton, says that while the campaign to end stop-and-frisk was successful in raising awareness of the tactic, it also had the adverse effect of narrowing the public’s focus on a policy rather than the philosophy that undergirds it and now justifies drones and hotspot forecasting. In a way, limiting stop and frisk was akin to taking Imodium for Ebola-induced nausea.

“In order to remobilize now in the face of all these new advances, we have to look not necessarily at traditional policing movements but also [at] building alliances with other movements,” Trujillo said.

To successfully challenge broken windows policing and all its current and future manifestations, Trujillo says a broader coalition of civil libertarians and immigrant rights’ groups, among others most affected by police surveillance, will have to be built.

In the end, policing algorithms, drones, and stop-and-frisk are not the problems. The problem is a decades-old approach to policing that undermines the privacy and dignity of low-income communities with an ever-expanding infrastructure of invasive technology and tactic.

The Sectarian Debacle in the Middle East

The Sectarian Debacle in the Middle East
We Need Your Support — Donate, Share, Sign-Up Ways to Support