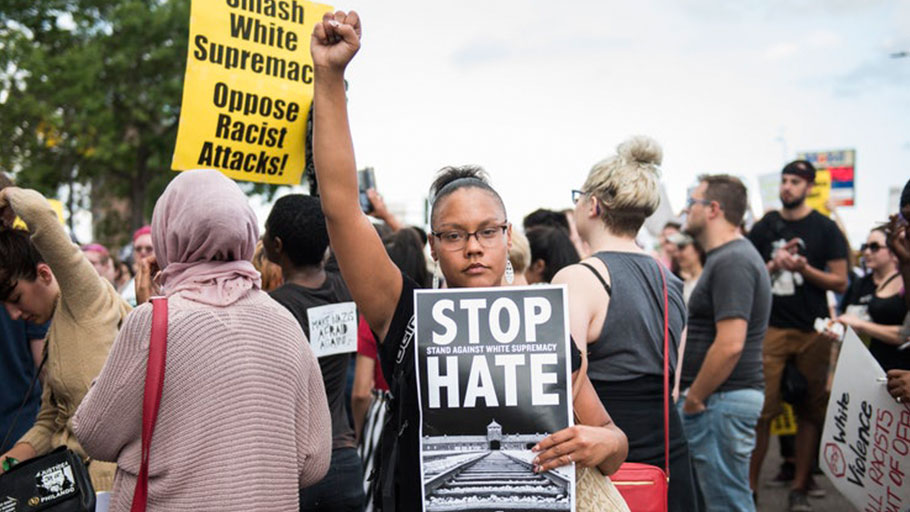 You Are Here: Home » Blog » News & Current Affairs » What Black Lives Matter Organizers Are Doing To Fight White Supremacy At Every Level

Last year’s presidential campaign trail banter was not unlike that of election year’s past, in that it was full of nasty, backhanded, gender-based undercuts aimed at delegitimizing opponents and drawing out emotional responses at the ballot box. Noticeably different from previous year’s strategies, however, was the Trump campaign’s deliberate courting one of America’s oldest and biggest threats to a civil and just world: white supremacists.

To garner votes and stoke anti-establishment flames, Trump latched on to the ideology of white supremacy and incentivized violence on the campaign trail, encouraging his supporters — some of whom carried the banner of Nazism and Klansmanship — to physically harm people, promising at a February 2016 rally to “pay for the legal fees” of anyone who got violent with anti-Trump protesters. He used political dog-whistles to signal a 21st century ideological war, one that has also included hate speech and deadly violence.

This past weekend’s deadly white supremacist rally in Charlottesville, VA, made visible what many organizers and activists have been warning since the 2016 campaign season: Donald Trump promised more death, disenfranchisement and deportations — and now he’s delivering on that promise. The violence he will inflict in office through through policy, and the permission he gives for others to commit acts of violence, is just beginning to emerge.

White supremacy is a web of violent and abusive behaviors bolstered by white nationalists, racist elected officials, violent police and law enforcement, corporate money, and you.

The good news is that we’re not helpless; there are many things we can all do to fight white supremacy. Some of these things are changes we can make to our everyday lives, while others are issues that need to be addressed on a systemic national scale. But we need to know exactly where to begin — and what brand of white supremacy we’re dealing with at every turn.

It’s important to remember that white supremacy is not just people in hoods, nor can it be reduced to only people who are poor, rural and white. White supremacy is a web of violent and abusive behaviors bolstered by white nationalists, racist elected officials, violent police and law enforcement, corporate money, and you. Yes, you. And me, too. White supremacy is an insidious spectrum ideology, so most of us perpetuate it even if we don’t mean to.

If we want to win this battle, we need to open our eyes to all the symbiotic ways white supremacy touches each and every one of our lives — and then come up with the best course of action to fight it.

Black Lives Matter, and the Movement for Black lives more broadly, are working across geographical and issue areas to call attention to white supremacy and build sustainable, resourced movements to significantly reduce it. For some of the most explicit brands of ideological white supremacy — like that espoused by the white supremacist who plowed into anti-racist protestors in Charlottesville, VA last week, killing local activist Heather Heyer — organizers are taking the fight to their own backyards, organizing people in local communities, having courageous conversations with people who would not otherwise have courageous conversations with us, or encouraging our allies to have those conversations in our stead. For example, take a cue from the Dream Defenders and host a Day of Dinners and ask people to “open their hearts and homes to start a new conversation about the country we want and a future worth fighting for.”

We must reckon with the anti-blackness of America’s history that led to this political moment. And we must get justice for those hurt along the way.

The same organizing we’ve been doing for decades is being replicated all over the country. Organizing that includes building and convening member-led organizations where everyday people can strategize together about how to build power for ourselves. Organizing that holds the officials we elect to office accountable for their decisions. Organizing that demands a just and fair society for us all.  Building the kind of people power to organize our country into a safe place for Black people — one that leads with inclusivity and a commitment to justice, not intimidation and fear. 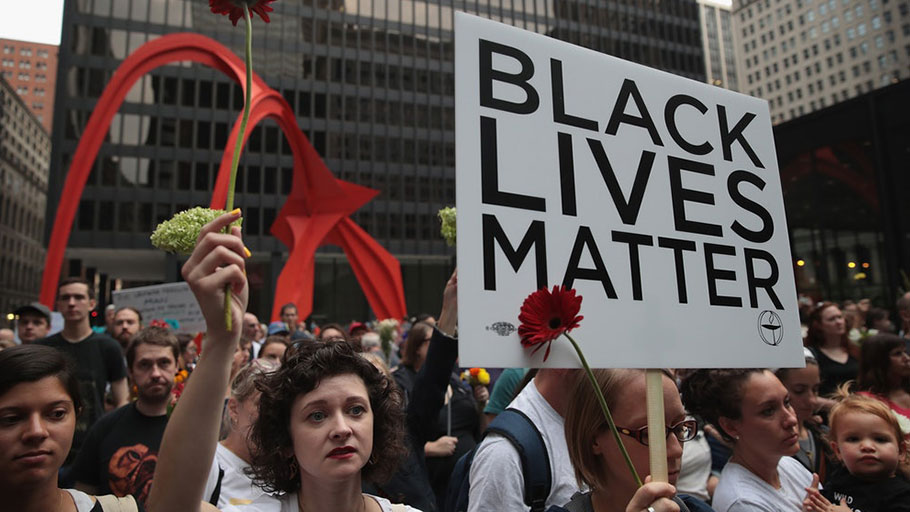 In other ways, we are challenging white supremacy by helping bring democracy within reach. Organizers from Greensboro to St. Louis are creating opportunities for civic engagement — some organizers are running for political office themselves and others pushing candidates to use the Movement for Black Lives Vision for Black Lives Policy Platform. Anyone in the US can send this platform to their legislators and ask them to use it to drive change through their campaigns.

Additionally, Black organizers are training to make ideological interventions through the media to help transcend barriers to empathizing with and understanding Blackness and the plight of Black communities in America. For example, through Channel Black, organizers are supplementing tried-and-true, on-the-ground organizing tactics with media interventions like correcting misinformation about who movement is and what we stand for, and putting members of the movement front and center. By increasing the diversity of faces and opinions debating issues that impact America’s most oppressed, we are reducing racial bias and prejudicial treatment by law enforcement, vigilantes, and everyday people.

A less explicit, but equally devastating, brand of white supremacy involves our elected officials turning a blind eye to systems of oppression that directly, and often physically, harm people of color — like when elected officials knowingly harmed thousands of Flint, Michigan, residents by giving them a water supply tainted by lead and other poisons, which killed a dozen and left many others with lead poisoning and lifelong chronic illness; years later, officials still refuse to take responsibility. In response, organizations like Color of Change are using digital organizing and campaigns to mobilize everyday people and put pressure on decision makers.

The importance of these efforts cannot be underscored enough — we must reckon with the anti-blackness of America’s history that led to this political moment. And we must get justice for those hurt along the way. You can pressure your elected officials by showing up to their committee meetings, flooding their voicemails and emails with your questions and concerns (and kudos when they’re deserved), and by supporting organizations who hold them accountable with your dollars and time. 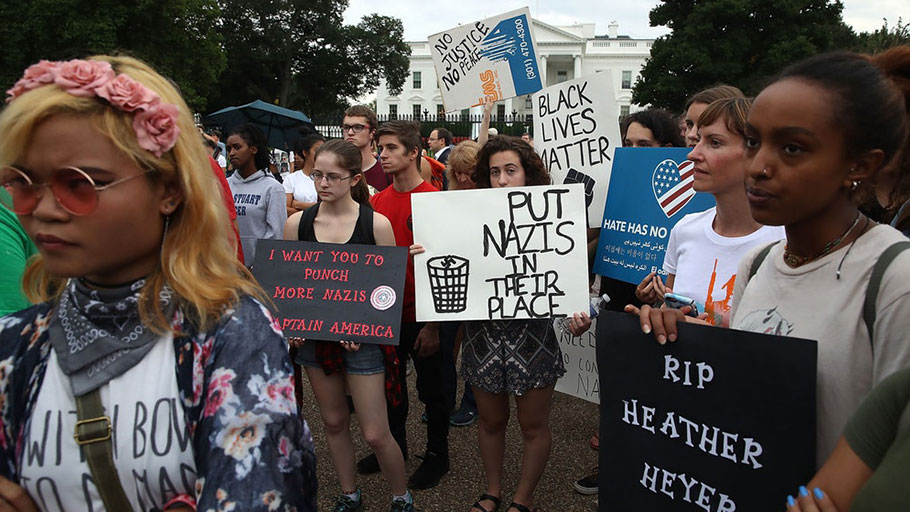 Democratic frontrunners Kamala Harris and Stacey Abrams are giving Black people and other people of color hope for a political experience that is dignified and where we can see ourselves, our families, and our values reflected — even if it is an imperfect process. However you feel about the electoral process, having policy makers who are eager to make important interventions in Congress is critical to ensuring that white supremacists have less — not more — power.

Police brutality and violence and bias within the criminal justice system is the brand of white supremacy that the most people turn a blind eye to, either because solutions feel intimidating and out of reach, or because the assumption of security is too comfortable to question. Every year, people are killed by law enforcement, correctional officers, immigration thugs, security guards, and violent vigilantes.  And every time an enforcement officer or vigilante kills someone they’re meant to protect and is acquitted, that is white supremacy in action. All of America must take responsibility for and contend with our deadly policing system. All of us.

This political moment may feel new, but we’ve been here before. There isn’t a difference between the so-called Alt-Right and neo-Nazis, and racist confederates of the days when Black people were chattel slavery — we are talking about the same exact thinking. And as long as it has existed, Black organizers and their allies have been here to combat it. The question is, are we the same nation that turned a blind eye as statues of Confederate soldiers were erected, and prisons were built to incarcerate African Americans at five times the rate of whites — or are we different? Are you different?