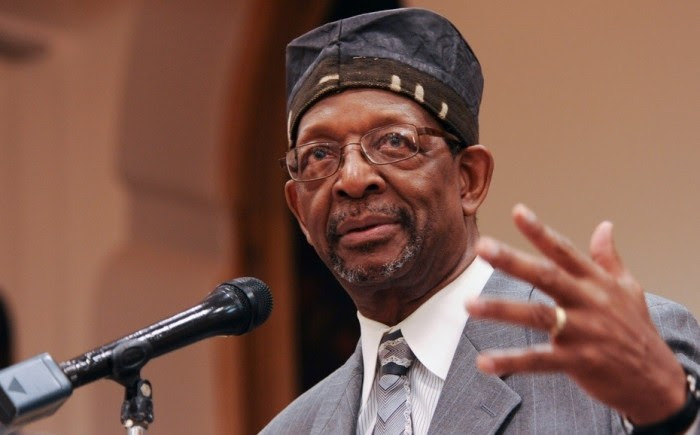 Dr. Daniels, president of the Institute of the Black World 21st Century (IBW), was hosted by Greg Akili of the Los Angeles Black Worker Center and Black Lives Matter – Los Angeles, and Dr. Shirley Better, president of the Association of Black Social Workers. The luncheon was attended by local community leaders, clergy, activists, and scholars.

Within the drug policy reform movement, across the country, marijuana is being decriminalized, because in many cities, White students are smoking weed, Dr. Daniels noted. However, Blacks, such as in Washington, D.C., overwhelmingly are being imprisoned.

“Decriminalization means at least in part that bothers and sisters are not going to jail for having small quantities of marijuana. They get a ticket. They get a fine, whatever,” he said. Then, there is the fact that Blacks are being fined more than anyone else, he continued, so it is still a discriminatory policy.

Another phenomenon sweeping the nation is the legalization and regulation of marijuana, he said. He advocates so Blacks who have born the brunt of the drug war are not left out of the benefits, now that the pendulum is swinging toward legalization.

He highlighted a California initiative to legalize, regulate and tax marijuana, saying quite frankly, those driving it really care only about making money. Fortunately, however, Black activists who have been pushing for it have made a way for some possibility for reinvestment in to the community.

Part of why Dr. Daniels spoke in L.A. and is traveling across the country is to promote education and awareness around drugs and what they’ve done to the Black community. Part of that is highlighting why people need to take a new look at what is occurring around opiates, he said.

“Congress has already allocated money to help communities deal with this issue of opiates, because it’s White people, treatment, a public health framework. Why don’t we make a deal with it that way, as opposed to criminalizing it,” he stated.

In Washington, D.C., the drug is now legal, for recreational purposes, but what is also important is the regulation and taxation, such as with alcohol, Dr. Daniels and drug reform advocates noted.

According to the activist, the problem is though Blacks were the ones damages, jailed, and inflicted with mass incarceration, the new emerging multi-billion dollar industry will literally benefit White men.

“People can have their debates about whether you think marijuana is good or bad or whatever … but the science now shows pretty persuasively that marijuana ain’t no more dangerous than alcohol … The question is why should it be criminalized,” Dr. Daniels stated.

He said the war on drugs disproportionately targeted and disenfranchised Black and Brown people, which is part of why he has joined the movement for reform.

“You go to jail. When you get out, you don’t get a get out of jail card. You are still in the same past. You can’t get a job. You can’t get housing. You’re locked in these circumstances,” Dr. Daniels said.

He said IBW became involved in the war on drugs because it is a war on Blacks. “We have to get rid of the war on drugs, not because we were necessarily advocating that people ought to smoke weed or do crack or do anything else, but in fact we were the ones disproportionately damaged,” Dr. Daniels said.

He said the severe damage struck on families and communities through incarceration rates, and particularly in the absence of investments. Ending the war on drugs itself will not cure all, Dr. Daniels said.

More is required to deal with the literal millions of men and women returning home to virtually barren communities with little to no jobs, he said. He said it is important back but monitor proposed legislation with provisions for certain percentages of sales dollars to be reinvested into education, and community programs.

In addition, Dr. Daniels noted, some people still have an aversion to some drug legalization for good reason. “We were the ones who saw what was going on in our community with crack and drugs and the pain and families being broken up and all kinds of craziness that was going down that was really frightening and fearful and so forth,” he acknowledged.

Now, look more deeply into the real consequences, how they affect the whole, and make a decision, he said. Some will vote for regulation and legalization and others will be opposed, but the bottom line is figuring out a way to reduce the harm, he said.

He positioned, “If in fact our young brothers and sisters have gone to jail for this, number one, how do we reduce the harm and make sure they’re not going to jail in large numbers, and secondly, if there’s going to be an industry built, then why should not a significant amount of some of those resources come back in our community to help rebuild our communities?”