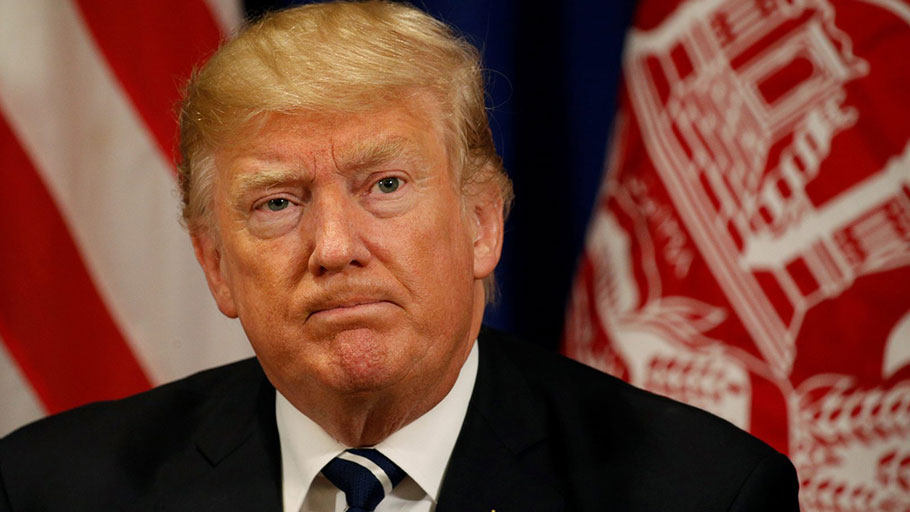 Caribbean divided on recognition of Jerusalem as capital of Israel

You Are Here: Home » Blog » News & Current Affairs » Caribbean divided on recognition of Jerusalem as capital of Israel

U.S. President Donald Trump looks on during his meeting with Afghan President Ashraf Ghani during the U.N. General Assembly in New York, US, September 21, 2017. (Reuters)

BRIDGETOWN – Caribbean Community (CARICOM) countries were divided Thursday on whether or not to support the decision by the United States to recognise Jerusalem as the capital of Israel.

More than 100 members of the United Nations backed a non-binding resolution that called on President Donald Trump to reverse his decision to recognise Jerusalem even as Washington threatened it would not forget countries that support the resolution that read in part “any decisions and actions which purport to have altered, the character, status or demographic composition of the Holy City of Jerusalem have no legal effect, are null and void and must be rescinded in compliance with relevant resolutions of the [UN] Security Council”.

The resolution “calls upon all States to refrain from the establishment of diplomatic missions in the Holy City of Jerusalem”.

No CARICOM country was in support of the US move with Washington gaining the nod from Israel, Guatemala, Honduras, the Marshall Islands, Micronesia, Nauru, Palau and Togo.

However, Antigua and Barbuda, Bahamas, Jamaica and Trinidad and Tobago were among the 35 countries that abstained during the vote.

Trinidad and Tobago’s Minister of Foreign and CARICOM Affairs Dennis Moses later said that the Keith Rowley administration had taken its domestic position into consideration when it voted.

Among the CARICOM states that were among the 128 countries that voted in favour of the resolution were Barbados, Belize, Dominica, Grenada, Guyana, St Vincent and the Grenadines and Suriname.

St Lucia and Haiti did not register a vote and it is not known whether they were among the 21 countries that stayed away from the UN General Assembly meeting on Thursday.

The St Vincent and the Grenadines government was the only CARICOM country that had publicly called on Washington “to refrain from recognising Jerusalem as the capital of the State of Israel” after Trump had indicated a willingness to do so.

“Any such recognition would imperil the internationally-agreed Two-State Solution, destabilise the Middle East region, and invalidate the important role of the United States as an honest broker and driver of the Israeli-Palestinian peace process,” the Ministry of Foreign Affairs said in a statement.

The capital of Israel is Tel Aviv, while Jerusalem is a corpus separatum, or a “separated body” with a special legal and political status.

The Gonsalves administration noted that in 1980, in response to an Israeli attempt to declare Jerusalem to be the capital of Israel, the United Nations Security Council condemned that declaration as a violation of international law.

The Security Council went on to state that “all legislative and administrative measures and actions taken by Israel, the occupying Power, which have altered or purport to alter the character and status of the Holy City of Jerusalem . . . are null and void and must be rescinded forthwith,” and that such actions “constitute . . . a serious obstruction to achieving a comprehensive, just and lasting peace in the Middle East,” the Ministry of Foreign Affairs noted.

The statement said that while St Vincent and the Grenadines applauds recent efforts by the United States “to reinvigorate the Israeli-Palestinian peace process, we urge that such efforts focus on cessation of illegal Israeli settlement activity in Palestinian territory, the removal of impediments to movement and commerce within the State of Palestine, and the fostering of an environment of trust and goodwill that can stimulate meaningful negotiations between the parties.

“The decades of painstaking work, to say nothing of the lives lost in the conflict, demand mature, responsible and measured action.

“Accordingly, St Vincent and the Grenadines strongly urges the United States of America to acknowledge that any unilateral declaration on its part regarding the status of Jerusalem will not in any way advance the cause of a just, peaceful and lasting solution to the dispute between the peoples of Israel and Palestine,” the statement said.

Prior to the vote on Thursday, President Trump had also indicated that If the UN voted against his country, he forecast that the US would “save a lot.

“We don’t care. But this isn’t like it used to be where they could vote against you and then you pay them hundreds of millions of dollars. We’re not going to be taken advantage of any longer,” Trump said.

The US ambassador to the UN, Nikki Haley, had also warned that she would be “taking names” of those countries that voted in support of the resolution.

“The United States will remember this day, on which it was singled out for attack in the General Assembly for the very act of exercising our right as a sovereign nation.

“America will put our embassy in Jerusalem. That is what the American people want us to do. And it is the right thing to do. No vote in the United Nations will make any difference on that,” she added. (CMC)