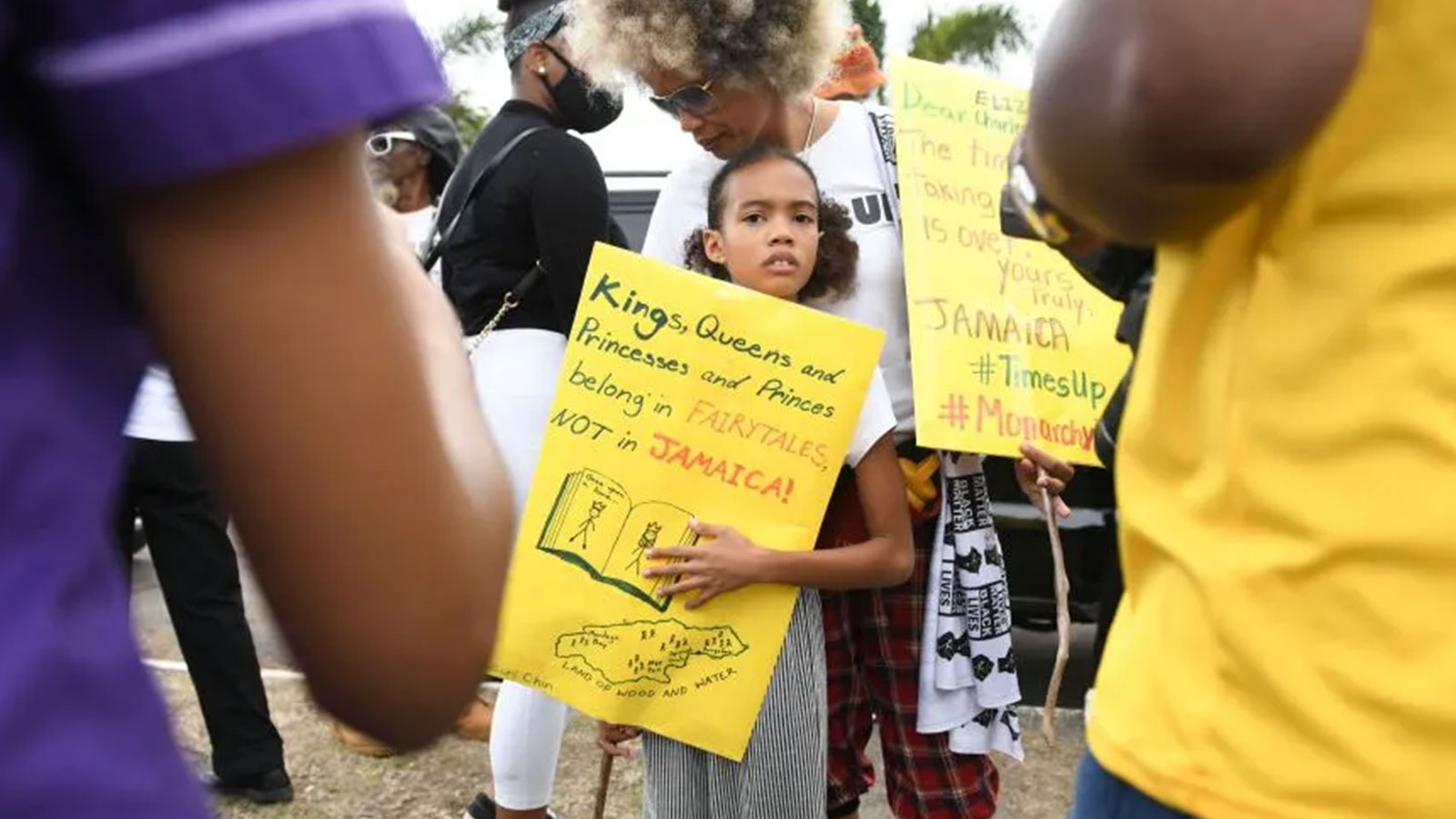 You Are Here: Home » Blog » News & Current Affairs » Queen Elizabeth’s passing could push some countries to alter their ties to the British monarchy

The passing of Queen Elizabeth may give momentum to republican movements in some of Britain’s former imperial possessions.

Queen Elizabeth II’s passing has sparked an outpouring of mourning across the world, but in many places, the end of her reign is also raising questions about what the future holds.

Over a dozen countries recognized the late monarch as their head of state, including Canada, New Zealand, Australia, Belize, Jamaica, Tuvalu, Papua New Guinea and the Solomon Islands. Her death is likely to ignite debate about whether her successor, King Charles III, should fulfill that role. Already, there have been calls for change.

Adam Bandt, the leader of Australia’s Greens Party, posted condolences to the Queen’s family on Twitter. But he added “Now Australia must move forward,” saying “We need [a] Treaty with First Nations people, and we need to become a Republic.”

Katie Pickles, a professor of history at the University of Canterbury in New Zealand, says “As the importance of the monarchy became less important in society, places like New Zealand hung on because they held the Queen personally in such high respect.”

She tells TIME: “King Charles and Queen Consort Camilla will likely not have the same appeal.”

Cindy McCreery, a senior lecturer in history at the University of Sydney who specializes in monarchy and colonialism, agrees that republican sentiment will be given impetus.

“I do think that now that the Queen has passed on, that does give republicans in Australia and elsewhere more room to speak openly about the constitutional future and to kind of prepare the path for a republic,” McCreery says.

People calling for slavery reparations protest outside the entrance of the British High Commission during the visit of the Duke and Duchess of Cambridge in Kingston, Jamaica on March 22, 2022. RICARDO MAKYN/AFP via Getty Images

Anti-monarchist sentiment in the Caribbean

In some countries anti-monarchist sentiment has grown in tandem with racial justice movements, bringing anti-colonialist thinking and conversations on Indigenous rights into the mainstream.

The Duke and Duchess of Cambridge faced a raft of protests on a trip through the Caribbean in March, with some groups demanding an apology and reparations for slavery. William and Kate cancelled a visit to a cacao farm, the first stop on their tour of Belize, because of protests.

Ahead of their visit to Jamaica, an open letter released by the Advocates Network, and signed by more than 100 local leaders, said: “During her 70 years on the throne, your grandmother has done nothing to redress and atone for the suffering of our ancestors that took place during her reign and/or during the entire period of British trafficking of Africans, enslavement, indentureship and colonization.”

According to McCreery, “Particularly countries in the Caribbean, which of course have that very painful legacy of British slavery in the past, I think they are more likely to be among the states that choose to become republics.”

In June, Jamaica’s Minister of Legal and Constitutional Affairs, Marlene Malahoo Forte, said that the process of transitioning to a republic had “formally commenced.”

Barbados, once called “Little England” for its tight British ties, became a republic in late 2021. 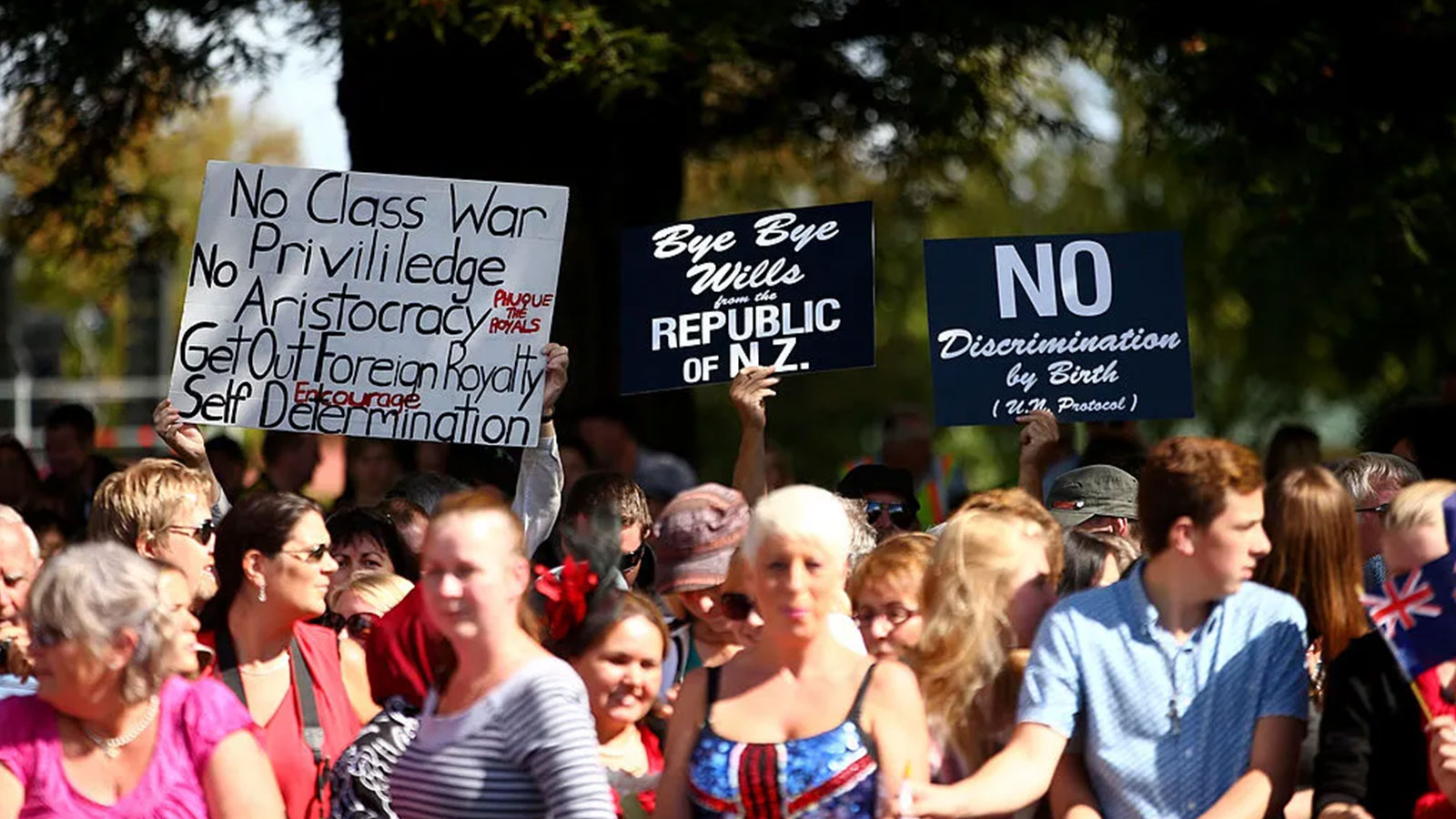 A group of republicans protests outside the Town Hall before the arrival of the Duke and Duchess of Cambridge on April 12, 2014 in Hamilton, New Zealand. Phil Walter/Getty Images

The Australian Republic Movement, which wants an Australian to replace the British King or Queen as the head of state, declined to provide a comment for this article. But in a statement issued after the Queen’s death, it hinted at a political opportunity. “It is unlikely we will ever see a Monarch as respected or admired by the Australian people again,” said Peter FitzSimons, chair of the movement.

In June 2022, Australia appointed Matt Thistlethwaite, a former republican campaigner, as its first ever assistant minister for the republic, to help oversee the country’s potential transition.

“We’ve got this unique opportunity with a Queen coming to the end of her reign, for us to now lay the groundwork so that when that does happen in the future, we’re ready to go with a campaign and a chance to really create a truly independent nation,” he told the Sydney Morning Herald in an interview published on Sept. 3.

In 2016, then leader of New Zealand’s Labour Party, Andrew Little, said that “the end of the reign of the current monarch would be a good time to debate our constitutional arrangements. Do we still want to have our head of state living in London? Or do we want to do something else? Stand on our own two feet?”

New Zealand’s Prime Minister Jacinda Ardern said in 2021 that she thinks the country will become a republic in her lifetime.

Rawiri Waititi, a member of New Zealand’s parliament and the co-leader of the Māori Party, said on Twitter on Friday that “the huge vacuum left” by the Queen’s death “will cause debate.”

One New Zealand republican, who asked not to be named, told TIME that “There’s that very strong feeling of nostalgia with the Queen that doesn’t transfer to her son or grandchildren.”

“I think this is very much a moment when the discussion about possible moves to become republics will open up,” McCreery concludes. “I think that there was a great sense of restraint during the Queen’s reign.”