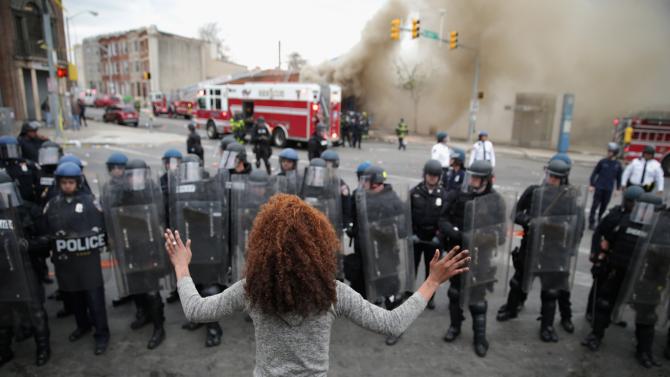 Everyone’s Watching Baltimore: So, Now What?

A woman faces down a line of Baltimore police officers in riot gear during violent protests following the funeral of Freddie Gray, April 27, 2015, in Baltimore.

Baltimoreans are a bit touchy about the attention their city is receiving from “outsiders”—everyone from a rainbow of volunteers from faith-based or social-justice-oriented groups around the nation who see Baltimore as their next mission, to the U.S. attorney general to national figures like the Rev. Al Sharpton, Cornel West and even Prince, who performed a peace concert May 10. This is, after all, the city of Frederick Douglass and Thurgood Marshall, of strong HBCUs and of the NAACP. Even before its national headquarters moved to Baltimore from New York three decades ago, the local chapter was one of the NAACP’s strongest.

So a strong current of “We don’t need outsiders” rippled through many Baltimoreans as peaceful protests began immediately after Freddie Gray died April 19 from spinal injuries he suffered while in police custody. Then a violent release of pent-up frustration after Gray’s funeral shocked not just the nation but Baltimore itself, sending everyone scrambling for ways to restore the peace. Faith communities, self-identified members of notorious street gangs, regular Jacks and Jills with brooms and paintbrushes, and cultural institutions like the Reginald F. Lewis Museum have answered the call.

“We’ve been pushed over the cliff, and we have to do what we’re doing now,” observes Natasha Pratt-Harris, director of the criminal-justice program at Morgan State University.

Adds Tessa Hill Aston, president of the local NAACP: “We need to reach our hand out to anybody who wants to come to the table and help save the city.”

So Crips, Bloods and Black Guerrilla Family, yes. The disciplined men of the Nation of Islam, yes. The incendiary “Shut the city down” rhetoric of Malik Shabazz and his Washington-based Black Lawyers for Justice, maybe not so much. Sharpton, who popularized the now common cry of “No justice! No peace!” decades ago in New York, assures good TV, especially on MSNBC, and he’s plugged into the White House. So Sharpton is sort of OK.

Like many of those emerging as leaders, many of the current inhabitants of Sandtown-Winchester, the West Baltimore area at the center of the current crisis, were not born in 1968, when days of rioting followed the assassination of the Rev. Martin Luther King Jr. But they do know the despair that was evident then. They do know that their Baltimore is not the one touted in travel brochures.

What they may not know is the poisonous history of racist policies dating to the earliest days of the last century, as recounted recently in a damning New York Times editorial, which still doom thousands of people to wretched lives of poverty with little opportunity for escape.

“When people say, ‘We want to get back to normal,’ normal doesn’t work for neighborhoods that were already in precarious and unjust situations to begin with,” observes the Rev. Heber Brown III, a leader of Baltimore United for Change, a coalition of social-justice activists that has raised more than $100,000 as bail money for hundreds arrested during the protests.

Beyond the official investigations, including one by the U.S. Justice Department that targets the Baltimore Police Department, the contours for the city’s rebirth are beginning to take shape in strategy meetings, civil-disobedience training sessions, teach-ins and prayer vigils. The televised town hall meetings organized by BET and TV One may have let the nation in on what Baltimore is going through, but the nitty-gritty work is taking place off-camera as ordinary people do their part to ensure that the blight left in so many cities after the 1968 riots will not long scar Baltimore’s landscape, or its soul.

But keeping up with who is doing what takes some effort. At times, as they dust off old models and write new scripts as they go, they seem to have forgotten the motto of Marcus Garvey, whose name has rung out at many a rally and church gathering in recent weeks: “One God. One aim. One destiny.” For instance, there are now two entities using the name “One Baltimore”—one led by about 300 interfaith representatives, the other by the mayor.

Mayor Stephanie Rawlings-Blake has not yet released details of what her One Baltimore will do, but members of the clergy are arranging prayer calls and making plans to open their doors in the summer for nonsectarian educational programs and recreation. They are also organizing to lobby state legislators on school budgets, prison reform and other measures.

A frame of reference for much of what is now taking place is 1968, when rioting led to a spurt of governmental largesse and civic activism, much of it focused on the Sandtown area. More than $130 million was earmarked for housing alone, but according to an investigative report in the Baltimore Sun, no one can account for how quite a bit of that money was spent, and Sandtown shows little sign of long-term benefits.

Back in 1968, the price of calm then was, it is widely believed, a deal with the legendary gangster Little Melvin Williams, who famously leaped on a car hood to urge rioters to clear the streets. Williams, the heroin kingpin of the day, was able to ply his craft, ravaging Sandtown and other Baltimore neighborhoods. Now criminologists are among those wondering out loud whether current leaders are playing with fire in partnering with gang members, but those working with them are generally convinced that their concern about their community is genuine.

“They might have their issues,” says Hill Aston of the NAACP, “but they don’t want to see Baltimore destroyed, either. Everybody wants calm.”

Baltimore is not following a messianic model, although the Rev. Jamal Bryant has received the most press outside of the government officials in the hot seat—much to the chagrin of other preachers. No one can deny that he appeals to the hip-hop generation. That cannot be said of most preachers or of the NAACP, which has opened a satellite office in Sandtown since Freddie Gray’s death.

The emergence of the Nation of Islam has been a welcome development, and some Christian preachers have said that they felt safe walking the streets during the height of the unrest only because men from the Nation were there. They have street cred, stemming not just from their discipline and demeanor—a combination of serenity and power—but also from their time in the 1990s as a city-retained security force for public housing projects like Gilmor Homes, where Freddie Gray lived.

Bryant and Minister Carlos Muhammad of Baltimore’s Mosque No. 6 recently traveled to Chicago to meet with Minister Louis Farrakhan, who, according to Bryant, was ecstatic to see his followers and Christian clergy working side by side to “craft a path for our generation.”

“He’s 1,000 percent behind it and supportive of it,” Bryant says, “so we are committed to making it work—at least here in Baltimore.”

E.R. Shipp, a Pulitzer Prize winner for commentary, has worked for the New York Times, the New York Daily News and the Washington Post. She is the journalist in residence at Morgan State University’s School of Global Journalism and Communication.