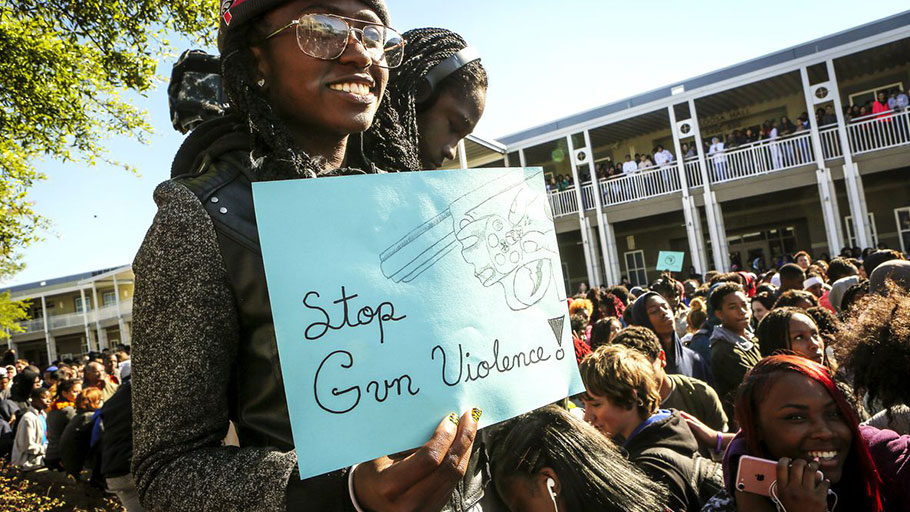 The gun reform debate has largely ignored race. Black students made sure the school walkouts didn’t.

Black and Latino students called attention to how gun violence affects communities of color during the National School Walkout on March 14, 2018. TNS via Getty Images

In Atlanta, high school students took a knee in protest. In Baltimore and Chicago, teenagers called for programs to address poverty and mental health services. And in Brooklyn, students demanded that the police system be reformed.

Across the country, many students of color who participated in the National School Walkout on Wednesday tried to deliver a simple message: Reducing gun violence is about more than stopping mass shootings in schools. It’s also about addressing how violence affects communities of color.

“I know a couple of people … had mixed feelings towards the walkout, because they felt if it was a black student being gunned down or black students being shot or shot at, it wouldn’t have got so much coverage,” Jaelah Jackson, a 15-year-old who participated in the school walkout in Brooklyn, told the Guardian. “They felt like minorities and African-Americans are diminished. They aren’t really represented and their cases aren’t presented as equally.”

In recent weeks, students have pointed out that race has played a role in how the media and politicians responded to the Parkland student activists, noting that when gun violence takes place in black communities, it doesn’t get the same attention.

Black activists say the Parkland students’ calls for gun control has sparked political debate and reform much faster than gun control advocacy from black and brown youth or campaigns from racial justice groups, like the Dream Defenders or the Movement for Black Lives.

This leads to a larger question about who gets empathy in America, which issues are deemed important, and the types of activism and activists the public responds to. Students all over the US weighed in on this, with protests that addressed how gun violence and race are deeply linked.

At Booker T. Washington High School in Atlanta, the same school Martin Luther King Jr. attended, students weren’t allowed to walk out of the building. Instead, they knelt in the hallways, a nod to the NFL protests started by Colin Kaepernick to protest racial inequality and police violence against black people.

Students at Booker T Washington High School in Atlanta talking a knee as part of the #NationalWalkoutDay protests. pic.twitter.com/bZpU8kQNjl

Students in Chicago also took part in the protests, using the walkout as a way to honor their fallen classmates and demand investments in communities of color.

Chicago students also noted that gun violence hits close to home. “There are people who are going through it who could be in your class or who could be in your school,” Damayanti Wallace, a student at Chicago High School for the Arts, told the Chicago Tribune. “You’re talking about it in class, or you’re talking about it in the hallway, or somebody’s, like, crying in the hallway because something happened last night.”

Some students from Chicago and Baltimore also took part in shared protests under the banner of Good Kids Mad City, a new collaborative effort calling for an end to gun violence through a comprehensive program that addresses youth unemployment, mental health services, and improved school resources.

“We understand that what happened in Florida was a tragedy, and we stand in support of the Parkland students,” said Nancy Ramirez, a Chicago student. “But we also understand that this is not [an issue with] a one-approach solution.”

Students at Brooklyn’s Academy of Young Writers dedicated their walkout to both the Parkland victims and black men and women killed in police shootings in recent years.

“The black community has been faced with lots of violence all the time,” Zayinab Jagun, a 17-year-old student, told reporters.

After Parkland, students and activists of color are trying to change the narrative

In recent weeks, civil rights advocates and racial justice activists have noted that rather than inspiring reform legislation or prompting national outcry, gun violence in black communities is often framed as an issue of self-control and black activists framed as criminals for their protests.

“Black people, unfortunately, continue to be criminalized for our moments of courage, for our moments of mourning and grieving,” Black Lives Matter Network co-founder Patrisse Cullors said during a Huffington Post event last month.

And experts on race and school discipline have noted that recent efforts to improve school safety and calls to arm teachers have largely ignored how increased discipline would affect students of color, and overlook the fact that school shootings like Parkland are rare in communities of color.

The current school safety debate “is about protecting the narrative that white suburban schools are places of safety and preserving the idea that violence is elsewhere, that black and Latino youth represent danger,” Stacey Patton, an assistant professor at Morgan State University, recently wrote in the Washington Post.

The students themselves are eager to change the narrative and expand the conversation.

“This march isn’t just for gun reform or to fight the NRA agenda,” a student organizer in Chicago explained on Wednesday. “It is for the rights of black and brown students to want safety in our communities.”