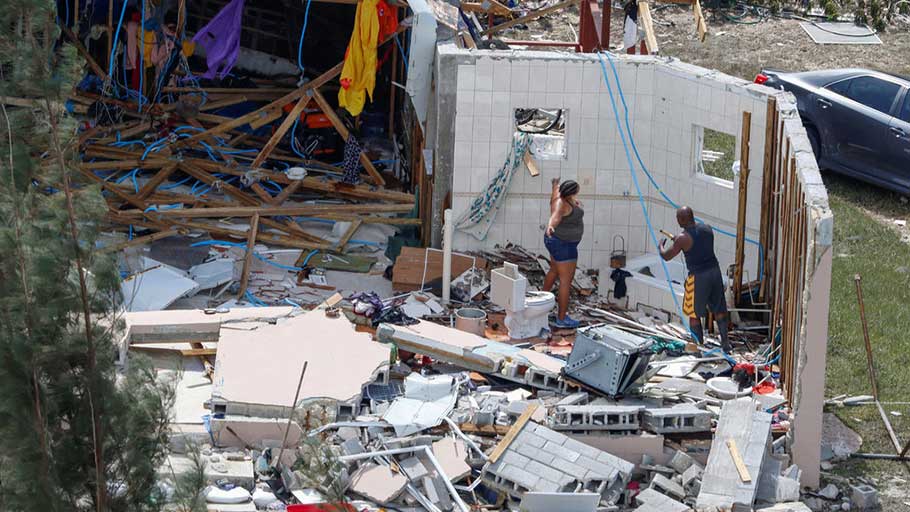 Destruction on the island of Grand Bahama in the Bahamas in the wake of Hurricane Dorian., Joe Skipper, Reuters.

The country has a tiny carbon footprint but carries the burden of being ground zero for global warming.

MIAMI — Whoever thought Dorian might be a good name for a hurricane has some explaining to do. In the Bahamas, when we have to deal with difficulties, we try to make the saddest people among us laugh, knowing that they will return the favor in our hour of need.

So when Hurricane Dorian hit land in the Abaco Islands in the northern Bahamas a few days ago and the horrific pictures started streaming in on social media, among the videos shared early on was what appeared to be a woman running through the rain and wind to safety, only to have her wig blown from her head.

The punch line wasn’t the wig taking flight. It was that she doubled back to retrieve it, rather than continue to safety, expanding the list of life’s essentials. Many people might read this as a highly inappropriate moment for such frivolity, but for Bahamians, it was perfect timing.

What we have seen in the past few days has been sublime in its horror. It has estranged us from the humor that keeps us going despite the increasing fragility of life in the breathtakingly beautiful place we call home. It has a tiny carbon footprint but carries the burden of being ground zero for our climate crisis.

We Bahamians listen to climate deniers in rich countries who are oblivious or indifferent to those who bear the weight for their wonderful lives. Meanwhile, the water rises from the ground in our yards because the water table is so high during high tide, and plants we once depended upon no longer grow. We experience too much rain or too little rain, and freshwater supplies are increasingly contaminated by rising sea levels.

We watch as the governments of small island states like our own, tied to multinational agreements, are forced to make decisions that are not in the best interests of the people they serve, while our electrical grid fails and we are made more dependent on fossil fuels rather than renewable energy. “Too expensive,” they say. “For whom?” we reply. “Is cost the only consideration?”

We feel the sunshine all around us but are prevented from employing it freely and legally to meet our energy needs. It can be illegal to take your house off the grid and go completely solar on your own, but who knows how often the government enforces this. The energy from solar panels becomes an enemy instead of a resource.

The United Nations recently released a damning climate report that stated unless immediate dramatic changes take place across the world, places like the Bahamas will be the first to be consumed by the ocean. There was no discussion of this apocalyptic report in the country, nothing from the prime minister.

Perhaps it was too much to discuss one’s own death sentence. Or perhaps we already knew. Because after all, there are times like this, when hurricanes named Dorian — a name forever associated with horror and the undying — ferociously bear down on the places and the people we love, providing a foretaste of what is to come when the waters will not recede.

It is difficult to summon humor now. We are an archipelago of 700 islands linked to a global archipelago of small communities of Bahamians across the world. I now live in what is often referred to as the northern Caribbean city of Miami. The storm assaulted two of the larger more populated islands in the north of the country, just a hundred miles away. I can feel the occasional bands of rain and breeze, while I hear reports of 200-, 185-, 165-mile-per-hour winds. I think, what will be left?

This is no longer unusual for Caribbean people. As I shared video footage with friends in Puerto Rico, they remarked, “I know the sound of that wind.” Is this what it means to be intimately connected by horror? Is there a new creolized language and aesthetic we have now become fluent in by default? We are island people. Where do you go? We live on slim margins.

On Day 2, the footage became less intense. We had watched light poles snap quickly and the grid fail. We had seen the sea break its boundaries, joining the rising canals to reclaim the earth. I had watched as friends documented the strange brown and gray water rising onto their porches, over car roofs, and into their houses. We had shared images of families who had done all the recommended preparations become trapped, praying to be rescued.

We had seen inside homes where the detritus bobbed in waters 10 feet high and unreal images of sharks and large fish swimming outside in the deluge, even as the water continued to rise 15 feet, then 20 feet. We had seen roofs blowing off like sheets of paper, cars, and boats upended like toys. We had cheered as people swam to safety and cried upon hearing reports of others who had tried to escape and failed. We had seen homes built for five become a refuge for 50. We furiously texted friends and family to make sure they were O.K. and we felt helpless.

As landlines failed and batteries died, the footage stopped. Communications were suddenly interrupted. The last text I received was from a friend at 3:45 a.m. on Monday: “This storm is a beast — but we are hanging in there.” There has been no word since.

On Wednesday those of us on other islands and cities barely touched by Hurricane Dorian began posting pictures on Facebook and Instagram of family members disappeared into the silence of dead batteries and broken services. “Have you seen them?” “Are they O.K.?” Beautiful faces streamed across social media. I was unable to look for very long, overcome with emotion and deathly afraid of recognition.

So we mobilize. We call on the United States to pass the Green New Deal. We donate to groups like HeadKnowles. We consider how to gather volunteers and Bahamian mental health workers to deploy in the coming days. But we need everyone’s help and kindness. We need tarps, tents, sleeping bags, batteries, flashlights, heavy equipment, generators, chain saws, electrical workers and people capable of rebuilding communication towers and homes. We need non-perishable food, wipes, adult and children’s diapers, bug spray.

We need lots of things but please — no tossed paper towels. This is not funny. Though gracious, Bahamians may toss them back to you.

Erica Moiah James, an assistant professor in the department of art and art history at the University of Miami, was the founding director and chief curator of the National Art Gallery of the Bahamas.