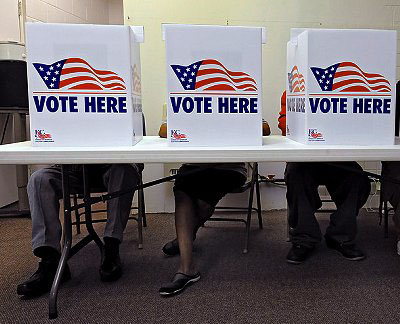 You Are Here: Home » Blog » News & Current Affairs » ‘It Won’t Be a Quiet Summer’ as Groups Campaign for Voters

(TriceEdneyWire.com) — The civil rights community’s get-out-the-vote machine is slowly reawakening. But given what’s at stake in this year’s mid-term elections, activists say, GOTV (Get Out The Vote) campaigners need to shake off their malaise—ASAP.

“It is too quiet, and we’ve got to get busy really fast,” said Melanie Campbell, president and CEO of the National Coalition on Black Civic Participation, adding that many groups seem to be in the planning stage.

Voter registration and voter turnout in communities of color and among the young tend to drop in non-presidential election cycles, a tendency that will present one of the major challenges to motivating voters.

“Those drops are what allows so many shifts in the political landscape,” said Marvin Randolph, the NAACP’s senior vice president of campaigns. “Our goal is to ensure that is not the case… We’re going to be taking it to the streets this year.”

It was one of those political shifts that ushered in a series of laws that will prove the biggest obstacle to voter registration and mobilization efforts this year. In response to the historic election of President Barack Obama in 2008, the mid-term elections of 2010 saw the rise of the Tea Party as conservative Republicans flooded Congress, state legislatures and governor’s mansions across the country. And those empowered GOP legislators immediately set out to enact laws that would ostensibly combat voter fraud and increase election integrity, but which, in reality, were meant to suppress the votes of minorities, the young, the poor and others who tend to vote Democrat.

“This has been the most coordinated attack on voting rights since Jim Crow,” added the NAACP leader, indicating the wave of laws that limited early voting, increased residency requirements, demanded proof of citizenship, required photo IDs for registration and voting, gerrymandered districts and more.

In 2012, the NAACP and other pro-voting rights groups fought back against the repressive voting laws and the punditry that predicted waning black enthusiasm over Obama’s presidency would be reflected in lower voter turnout.

“In 2012, not only did we run a get-out-the-vote and voter-mobilization campaign, we also ran a campaign to fight voter-suppression laws. We fought in the courts, in the court of public opinion and in the streets,” Randolph said.

Due to national and state-level work, the NAACP was able to register more than 350,000 voters and to mobilize1.2 million people to get to the polls on or before Election Day, according to its website.

“The [GOP] backlash had a backlash: Your parents and mine did not wait to vote; they came early because they were educated by folks like those of the NAACP that their vote was under attack…. People stayed in line, sometimes for eight hours, because they wanted to exercise their right to vote,” Randolph said. “Those laws are what gave people the extra push…knowing that their rights were being impinged upon.”

Activists say they hope voters will be similarly motivated this year, especially since GOP-led legislatures have become more emboldened, further reversing voters’ civil rights since the Supreme Court struck down Section 4 and invalidated Section 5 of the [Voting Rights Act], which was used to legally challenge laws that blocked equal access to the ballot box.

But getting the electorate motivated will require waging a robust education campaign to combat voter confusion and disillusionment.

“We have to get information out early, early, early, to ensure that people are informed of their rights,” Campbell said.
Earlier this month, Campbell’s National Coalition on Black Civic Participation held a Black Youth Vote conference, where young people from 10 states gathered to be trained to register and mobilize voters. The group also has a Power of the Sister Vote campaign, which focuses on educating and mobilizing women voters.

“We tend to have a strong focus on women because when they have information they tend to pass it on to their families,” Campbell said.

This week, Rev. Al Sharpton and the National Action Network announced they are “gearing up” to launch a freedom summer campaign in key states—Arkansas, Alabama, Florida, Louisiana, North Carolina, Ohio, Texas and Virginia—where voting rights are under attack.

The goal of the campaign will be to recruit and train volunteers to carry out voter-registration drives and to help fight voter suppression by providing critical support to voters, such as driving seniors to get new IDs, babysitting children so that their parents can take time to get copies of their birth certificates, or holding townhall meetings to educate communities.

On May 1, the National Coalition of 100 Black Women – Central Alabama Chapter will host a nationally simulcast panel discussion on the impact of the repressive laws. The same day, the American Bar Association will host several events in Washington, D.C., focused on those barriers to voting and ways to combat them, and there are other similar initiatives.

Randolph, the NAACP campaigns director, said his organization has a year-long GOTV program, during which volunteers get “very intense” training in the use of “21st century campaign tactics.”

The organization has a database of almost 1 million voters that allows for targeted campaigning, and they will be looking to garner even more voters, he said.“We will be making phone calls, knocking on doors, putting announcements on the radio… [and] we have a very active campaign on social media,” Randolph said.

Campbell said pro-civic engagement groups may have to surmount the scarcity of resources available for GOTV efforts in a non-presidential election cycle, but vowed that what had to be done would be accomplished “with or without.”

With the Jim Crow-lite laws as a spur, coupled with the fast approaching 50th anniversary of the seminal Freedom Summer—a courageous attempt to register Black voters in the then-segregated South—Campbell said she believes GOTV efforts will soon go into high gear.

She promised, “It won’t be a quiet summer.”