Journalists Targeted in Wave of Political Violence Across Brazil 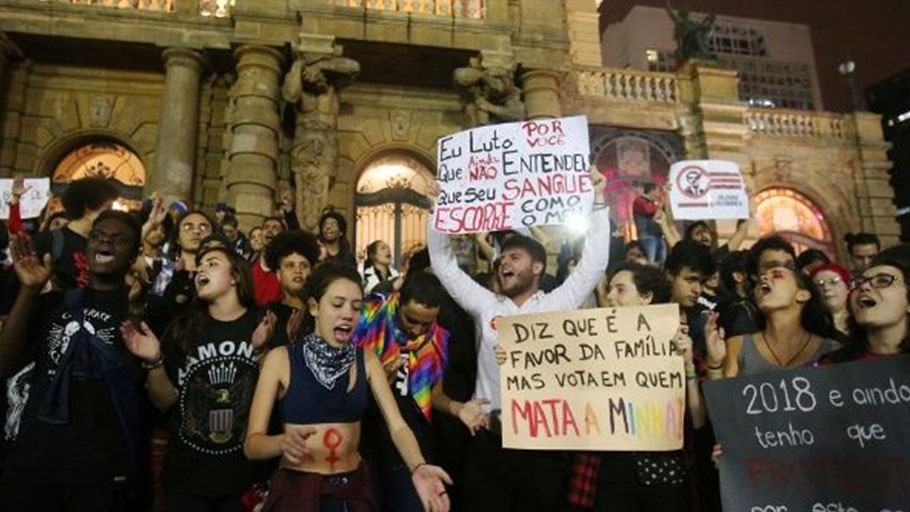 ‘We Are Afraid’: Anti-Bolsonaro Voters, Journalists Targeted in Wave of Political Violence Across Brazil, Activists Call for Action.

According to Agencia Publica, Bolsonaristas have been behind at least 50 separate attacks targeting left-wing activists and groups since Sep 30.

Thousands of activists, women and young Brazilians marched in Sao Paulo Thursday to protest against right-wing presidential candidate Jair Bolsonaro, who won the first round of the Brazilian presidential election on Oct. 7.

Angered by Bolsonaro’s sexist, misogynist, and homophobic comments, along with a wave of violence against persons unwilling to support Bolsonaro, protesters used the hashtag #EleNao, or #NotHim to drum up support against the former army captain.

The #NotHim hashtag, which has become increasingly popular over the last few weeks, has seen people in 24 countries and 52 cities show solidarity with Brazilian women and other at-risk groups. According to the Facebook account of “Women United Against Bolsonaro,” which now has over two million followers, the demonstrations are nonpartisan. International rallies have also been organized through the “Brazilian Women Abroad Against Bolsonaro” Facebook account and incorporated the #EleNão hashtag and “No to Fascism” slogan on social media.

According to Agencia Publica, an independent investigative journalism agency based in Brazil, Bolsonaristas have been behind at least 50 separate attacks targeting left-wing activists and groups since 30 September, with several other unconfirmed cases reported. Another group the Brazilian Association of Investigative Journalism (Abraji) has also registered more than 60 physical attacks on reporters, which took place “in a political, partisan and electoral context”.

In one such attack, a Workers Party (PT) supporter was murdered in Salvador, Bahia state, after a disagreement with a Bolsonaro supporter. In another, a 19-year-old girl was attacked and marked with a swastika for wearing a t-shirt that read “Ele Nao” (“Not Him”).

The acts of violence have led to fear and a general sense of uneasiness about life under Bolsonaro’s presidency since he has repeatedly expressed support for Brazil’s military dictatorship.

“The election has divided the country amongst a population that after four elections is tired of the government in power, and who wants radical change. This radical change is the far right. They (far-right supporters) defend Nazis, fascists, racists, homophobes, human rights ideals,” protester Gabriela Gomez told Reuters in an interview.

Caroline Salgao, another anti-Bolsonaro voter, told Al Jazeera: “I was really sad when I voted, I cried because of what is going to happen in this country.”

While protester, Vitor Nascimento, who has been attacked previously, said: “Being LGBTI, I am afraid of his supporters beating us up. It has happened to me.”

Members of the media have also come under attack in recent weeks, in one case a 40-year old female reporter was assaulted with a knife while attempting to vote. According to local media, two Bolsonaristas attacked the journalist after seeing her press credentials hanging from her neck. One of the attackers, while waving a knife and a Bolsonaro T-shirt, grabbed her and said: “When my commander wins the election you lot in the press will die.”

“The other one said, ‘Let’s take her off and rape her,’ and the one with the knife, said, “‘No, let’s cut her,’” according to a statement made by the journalist, who has pleaded for anonymity fearing further attacks.

Bolsonaro has also attacked the media labeling them as “trash” in a Twitter post Thursday and dismissed instances of violence saying they have been exaggerated by members of the media. He later attempted to walk back the comments in another post to the platform.

Bolsonaro claimed 46.03 percent of the votes in the first round of the election, with Worker’s Party candidate Fernando Haddad taking 29.28 percent. Both candidates will contest the run-off on Oct. 28.