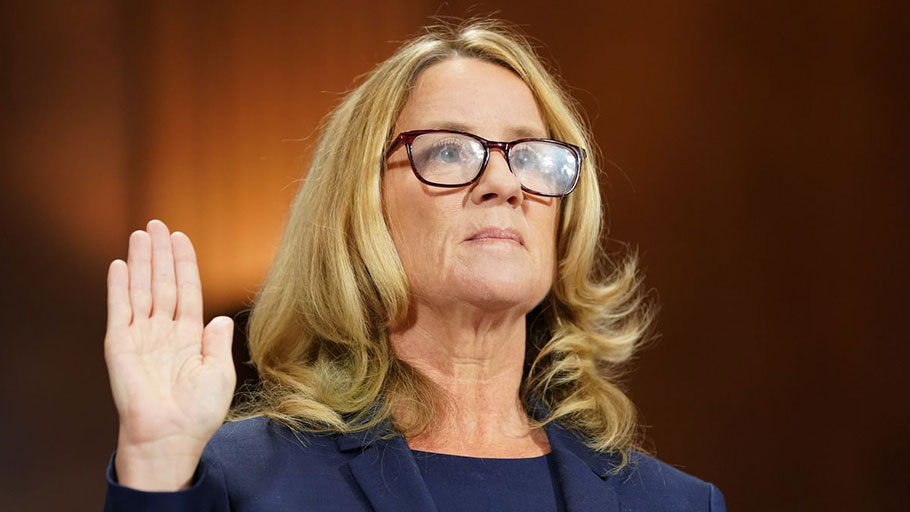 We must never forget the humble, dignified and courageous testimony of a Dr. Christine Blasey Ford before the Senate Judiciary Committee. With no outside witnesses being called, the Hearing was deliberately rigged to be a “she said, he said” spectacle.  We must never forget the bias treatment of Dr. Blasey Ford by the Committee’s Chairman Charles Grassley, who complimented her for coming into the lion’s den, and then attempted to discredit her in his opening statement. He also slammed Senator Diane Feinstein, Ranking Member of the Committee, another woman, for messing up the coronation of the “choir boy,” Judge Brett Kavanaugh, by not violating Dr. Ford’s explicit wish that her story be held confidential until she was prepared to make it public. Grassley and the Republicans were more concerned about the “process” than a credible allegation of sexual assault. To add insult to injury, the hearing proceeded with the cowardly, Republican White men hiding behind a hired hit woman, Rachel Mitchell, Esq., to do their dirty work.

Through it all Dr. Blasey Ford, who volunteered that she was “terrified,” calmly and courageously told her story, emphatically asserting that she was “100% certain” that it was a youthful, drunken Brett Kavanaugh who viciously and violently assaulted her. The whole world witnessed her courage and determination to come forth under adverse circumstances, an unlevel playing field, to tell her story as a matter of non-partisan civic duty. She was believable and credible. She told the truth!

Then came the calculated, angry, defiant, belligerent, hyper-partisan testimony of the “choir boy,” Judge Brett Kavanaugh, who proclaimed that he was “100% certain” that he did not assault Dr. Blasey Ford.  The cowardly Republican Senators quickly pushed Rachel Mitchell aside, tripping over themselves for a turn to heap praise on Kavanaugh for his judicial record and life of public service. They expressed sorrow and outrage over the shameful way he was treated in having to face a decades old accusation based on “no corroborating evidence.”  Suddenly, the alleged perpetrator of the sexual assault against Dr. Blasey Ford was being treated as if he were the victim!

When the Democratic Members sought to question Kavanaugh, he arrogantly tried to turn the tables by refusing to answer or posing questions back to the Senators. When Mr. “choir boy” was asked about reports by high school and college classmates that he drank heavily, he cavalierly dismissed the inquiries and even insulted Senator Amy Klobuchar, another woman, by asking her if she had ever drank too much! The sense of privilege and entitlement oozed out of every pore in his body. Judge Kavanaugh lied about his habitual drunkenness and if he lied about that, he most certainly lied about assaulting Dr. Christine Blasey Ford. The image of this angry, defiant, bellicose, arrogant, truth-denying man interrogating the Members of the Judiciary Committee is a spectacle that should forever be seared into our consciousness.

We must never forget the legions of women and men who courageously organized protest rallies and demonstrations in support of Dr. Ford and marched into the halls of Congress to challenge Senators to believe Dr. Ford’s truth. For a brief moment a memorable encounter in an elevator, with wavering, retiring Senator Jeff Flake of Arizona, gave rise to hope that an FBI investigation would reveal the lies of the choir boy and validate Dr. Ford’s truth. But, the White House deliberately limited the scope of the investigation in a manner that rendered it a charade. Neither Dr. Blasey Ford, Kavanaugh or scores of witnesses to the choir boy’s drunkenness and out of control behavior were interviewed. It was sham foisted on the American people under the guise of conducting a thorough investigation. The White men, who controlled the process, were not interested in justice, they had a political agenda; the decisive control of the Supreme Court to sanction their retrograde policies for decades to come.

Finally, against the backdrop of the choir boy’s belligerent behavior during the fake Hearing, we must never forget the “orange man’s” despicable, repeated mocking of Dr. Christine Blasey Ford at a campaign rally and his subsequent characterization of the women and men who marched, rallied and protested to support her as a “mob;” a label that was subsequently echoed by Chairman Charles Grassley, Senate Majority Leader Mitch McConnell and Senator Lindsey Graham to feed “red meat” to the Republican base and fire them up for the Mid-Term elections. These White men readily put power over principle and their political agenda over the truth of a victim of sexual assault; they spat in the face of the untold thousands, if not millions of victims of sexual assault, by insulting demonstrators, many of whom were women by branding them a “mob.”

But, “truth crushed to earth will rise again.” The “mob” of righteous, indignant people, some of whom have never voted before, must be mobilized to rise up and defiantly march on ballot boxes with the words “we remember Dr. Christine Blasey Ford” reverberating through-out the land.  Lest the nation forget, the images of the “orange man” mocking Dr. Ford should be replayed repeatedly on social media platforms and in campaign commercials. The vile ugliness of Trumpism and all that it represents must be eradicated and the cleansing must begin with the massive, irresistible mobilization of the “mob” to march on ballot boxes November 6th in the critical mid-term elections.  We remember Dr. Christine Blasey Ford!