You Are Here: Home » Blog » News & Current Affairs » Last-Minute Tips for Figuring Out Your Ballot and Making Sure You Can Vote 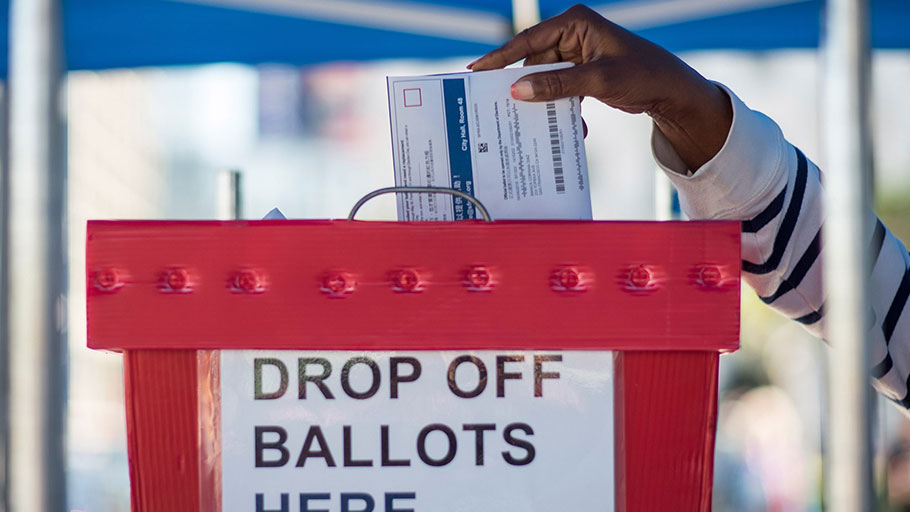 A voter casts a ballot at a polling station in San Francisco, California, on June 5, 2018. (David Paul Morris/Bloomberg via Getty Images)

The midterms are here. Here’s everything you need to know to hit the polls and cast an informed vote this election season.

While there are often reports of problems that can arise at the polls (maybe you’ve seen news of malfunctioning machines and registration purges in states that have early voting), a few simple steps can help make sure you’re ready to successfully cast your vote. Let’s start with figuring out what’s on your ballot.

No matter where you live, your congressional district is voting for a House representative in this election. Here’s how you can keep tabs on your representative: https://t.co/mzfnxo4hHI

What’s On Your Ballot?

You might be surprised on Election Day when you see just how much is on your ballot. In addition to federal candidates for the House and Senate, some states have local judicial elections, municipal races, lengthy ballot measures and more. (Some ballots in Florida counties run up to five pages long, double-sided!) Here’s how to get a game plan ready for when you enter the voting booth.

You can learn who and what is on your ballot by checking BallotReady, which provides specific information, from federal candidates down to your local officers, in addition to letting you fill out a mock ballot you can email or print to bring with you to the booth.

Have a Dress Rehearsal

If you’re still nervous about what to do once you get to your polling place, you might be able to get some practice. Many local election boards have an extra voting machine that anyone can come check out before they vote. Give them a call to see if they have a machine you can come try. (But be patient — this is their busiest season, especially if early voting has begun in your state.)

Maybe one candidate has already spent some time serving in the position and is up for re-election. If that’s the case, you can look into how they’ve spent their time in office so far. For congressional races, ProPublica’s Represent database pulls together key details about the bills your representatives have introduced, how they’ve voted, the issues they talk about and more. Here’s our guide to making sense of data about your representatives in Congress.

For candidates looking to make their first foray into politics, the League of Women Voters has information on local, state and federal candidates and ballot measures. You can search for your address or state on Vote411.

If you want to watch how the race in your district is changing in these last, final days before the election, ProPublica’s Election DataBot has everything you could ever want — such as polling numbers and news on specific candidates or races. You can even sign up to get email notifications. Read how to use the Election DataBot here.

Have you seen our new app: Represent? If not, you can read all about it here: https://t.co/5Sjh6CtfmD

Where Are You Supposed to Go?

What to Bring With You

ID requirements for voting vary widely by state, a mixed bag that can lead voters to mistakenly believe they don’t have the required ID when they actually do. Look up laws in your state on Vote411, from the League of Women Voters.

Double (or Triple) Check Your Registration

Issues with registration are among the most common problems voters face at the polls.

As we covered in a previous edition of the User’s Guide to Democracy, election officials regularly clean up their voter rolls to clear not only inactive voters but also those who have moved and forgotten to update their information. Voter purges, however, are prone to mistakes, sweeping eligible voters off the rolls. And in June, a Supreme Court case upheld the ability of election jurisdictions to cancel the voter registrations of people who haven’t voted in years and failed to respond to warnings sent by mail.

Make sure you’re registered — go to Vote.org to verify your voter registration.

If your registration has been deactivated (or if you haven’t registered yet), it might not be too late, depending on where you live. Fifteen states, and the District of Columbia, offer same-day registration on Election Day, allowing you to register and vote right at your polling location. Two states, North Carolina and Maryland, provide same-day registration during portions of their early voting periods.

If you believe your registration has been erroneously purged and the registration deadline in your state has passed, there are still a few things you can try when you go to the polls.

Know Your Rights as a Voter

The midterm elections will shape American politics for the next two years and beyond, and this year’s race is especially heated. We’re on track to see the highest turnout for a midterm since the mid-1960s. Voter turnout, however, can be dampened by voter misinformation and restricted access to the ballot. Knowing your rights is key to addressing additional problems you, or your fellow voters, may encounter on Election Day.

If you speak a language other than English and need help…

The Rules: You’re allowed to bring someone with you if you need help reading or casting your ballot. You can get help from any person you choose (except your employer or union representative) including a child, relative or friend. Your helper does not have to be over 18 or a registered voter.

You (probably) have the right to voting materials in a language other than English. Under the Voting Rights Act, any county with more than 10,000 residents whose native language is not English and who indicated on their U.S. Census form a lack of proficiency in English is required to provide election materials — including notices, forms, instructions and ballots — in the communities’ identified languages.

What You Can Do: If you know someone who needs help or see someone struggling at the polls, make sure they understand that, if their county does not have bilingual materials, or if they don’t have anybody to help them, they should ask for language assistance from a poll worker.

If the poll workers can’t help, you can call the following Election Protection hotlines:

If you have a disability and need an accessible voting station…

What You Can Do: If an ADA-compliant machine is not offered to you, you can ask for it. If the poll workers don’t know how to use the machine, you should contact the election director for your county and make them aware of the situation. You can also call one of the voter hotlines mentioned earlier for direct assistance.

If you see suspect flyers on your car windshield…

The Rules: Misinformation about voting is a common dirty trick in campaigns going back generations — fraudulent mailers, flyers, robocalls and SMS messages claiming that you can vote on Wednesday, for example, or warning that you’ll get arrested at the polls for outstanding parking tickets. Unfortunately, voters often fall for these sorts of deceptive practices.

What You Can Do: Only rely on trusted, independent sources of information, as well as official documents. You can verify that voting information you get in the mail is trustworthy by looking for the official election mail logo. 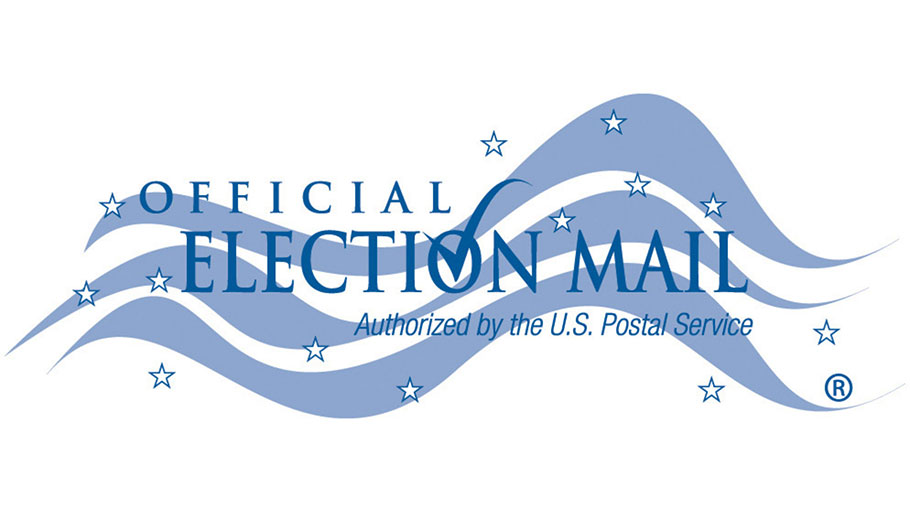 The U.S. Postal Service only allows this logo on materials sent by authorized election officials. It can not be used for political purposes by campaigns. (And please know that your elections office won’t leave official information on your car windshield or make robocalls.)

If you are still waiting in line when the polls close…

The Rule: Although heavy voter turnout is expected to lead to long lines, the wait cannot strip you of your right to vote. If you are standing in line when the polls are open, you are entitled to cast your ballot — even if your wait extends past the scheduled poll closing time. Most states have laws protecting this right, explaining exactly how the last person in line is distinguished, and poll workers are instructed to allow every person already in line when the polls close to vote.

What You Can Do: If you were in line before the polls closed, and someone tries to stop you from voting, call one of the voter hotlines, or your state or local election officials.

Electionland Is Here to Help

Electionland is a coalition of hundreds of newsrooms around the country that is monitoring all of the problems outlined above, now through Election Day. Led by ProPublica, Electionland uses data and technology to track any issues that can prevent voters from casting their ballots — including long lines, registration problems, purged voter rolls, broken machines, voter intimidation, misinformation, changed voting locations and more — nationwide and in real time. And we need your help to do it.

Here’s how to let us know if you encountered anything that stopped you or others from casting a ballot: 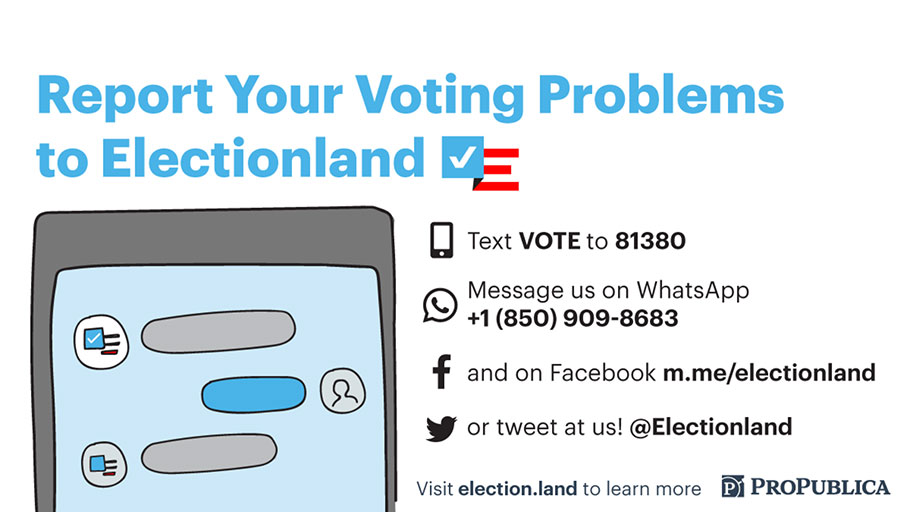 In 2016, the Electionland coalition went through thousands of tips from a legal call center hotline, as well as thousands of text messages and social media posts from voters like you. Local journalists around the country reported 400 stories and helped bring attention to voting problems that were fixed before polls closed.

This year, if you see something, say something. We’re listening.