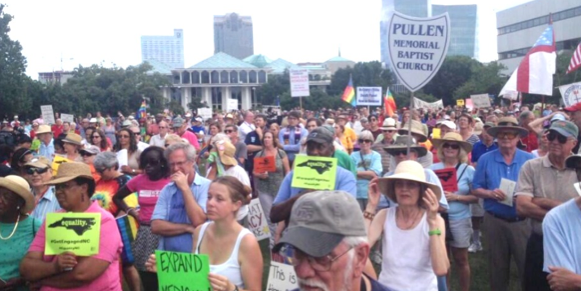 By Lauren McCauleyProtesters who for over a year have railed against the “extremist” policies of the North Carolina legislature are now bringing their fight to the voting booth as the movement known as Moral Mondays launched a bold initiative to get-out-the-vote this week.

“We have exposed the hypocrisy,” Rev. William J. Barber II, chief organizer of the protests and head of the state chapter of the NAACP, said during a rally outside the General Assembly in Raleigh on Monday. Now is the time to organize.”

Organizers estimate that upwards of 3,500 protesters from across the state attended the mass demonstration before splitting up into smaller factions for “teach-ins” to discuss the group’s new voter outreach strategy.

In what the group is calling an “aggressive” statewide voting campaign, several dozen youth activists who have undergone extensive training are now being deployed to hundreds of communities in North Carolina to initiate “deep organizing work and voter registration.” Dubbed the Moral Freedom Summer, the new campaign is a nod to the 1966 Mississippi voting rights drive when youth activists partnered with local civil rights organizations to educate and register disenfranchised African American voters.

Following the rally on Monday, 15 demonstrators were arrested for refusing to leave the legislative building where, in an act of civil disobedience, they held signs and chanted: “Whose house? Our house!” and, “This is what democracy looks like!” Over 1,000 demonstrators have now been arrested since the Moral Monday protests began last April.

Sharing a picture of the swelling crowd on Twitter, one protester wrote “Massive crowds! We are changing the context in North Carolina.”

Citing a recent poll by Public Policy Polling, the North Carolina NAACP notes that only 18 percent of voters in the state approve of the General Assembly and the work they are doing. For 60 weeks, members of the group have led rousing protests in an attempt to draw attention to what they call the “extremist policies” of the GOP-led legislature, which include rolling back voter protections, denying abortion rights, cutting unemployment benefits, failing to expand Medicaid and shifting public education money to private schools.

“Every major religion shares the ultimate value of how you use public power is how you treat the least of these,” Rev. Barber told the crowd. “We are winning and shifting the center of political gravity.”