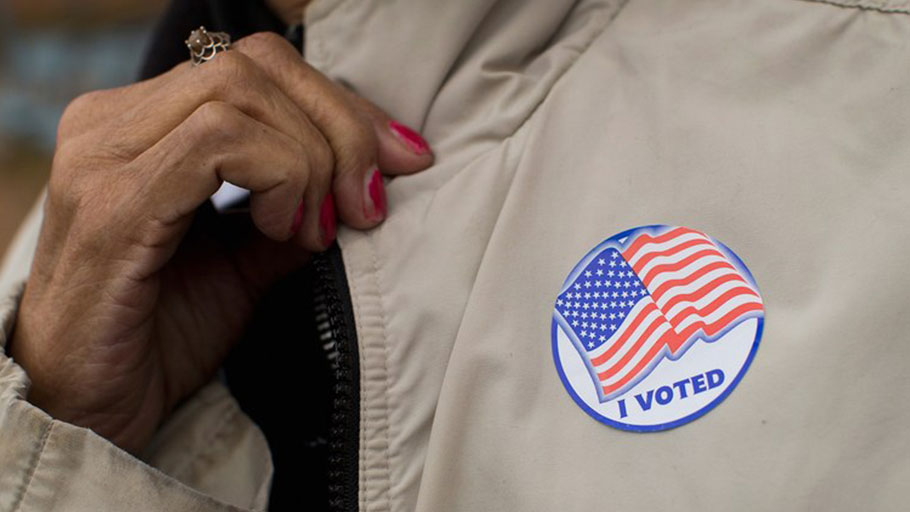 The Electoral Project strives for black voter literacy and awareness.

In 2014, in Ferguson, Missouri, Kayla Reed knew to expect tear gas — officers had used chemical agents on protestors in the past. As she stood with protestors facing a line of officers, tensions rose. Protestors openly declared that black lives matter, and officers’ faces grew red. Just as Kayla began to wonder about her safety, a large pickup truck rounded the corner with a gospel choir standing in its bed on a stage. Music surrounded them, moving the protesters with spiritual songs and asking the officers to stand down. The singers handed out water and kind words, and the tension surrendered. There was beauty in this safety, but still work to be done.

“I realized then that this wasn’t about the police, this was about us. This was a moment where I saw black people [providing] aid with what they had. We should celebrate the fact that we’re standing up,” Kayla tells Teen Vogue. “I just remember [feeling] really grateful.”

Today, Kayla works as the director of organizing at a consulting firm, Three Point Strategies, and is a leader with The Movement for Black Lives, a network of more than 50 black-led organizations including the Black Lives Matter Network, The Blackout Collective, Freedom Inc., Dream Defenders, SONG and others committed to the fight for liberation for all Black people. Together, M4BL created the Vision for Black Lives, a comprehensive policy platform that includes demands on topics like ending the criminalization, incarceration and killing of black people, reparations, economic justice, community control, and political power.

A key initiative is the Electoral Justice Project (EJP), which aims to build and support the black electorate by reaching people in communities across the country through a series of town halls and grassroots organizing strategies. EJP was formed with the intention of creating a black political home to build power to transform communities. Set to launch in November, the Electoral Justice Project will outsource dozens of town halls across the United States to discuss local issues and to help communities develop strategies for increasing civic engagement ahead of upcoming elections. Town halls will be utilized as a space for community members to engage and discuss issues that are impacting lives and to provide information about upcoming elections. The Electoral Justice Project is nonpartisan and will not back any party or candidates, but it will provide necessary info to help citizens recognize the seats, propositions, and statewide initiatives.

Having mapped out an achievement plan, the project declares it will do the following:

This identity will be formed by investing in civic education and addressing public policy in terms that can be understood clearly and thoroughly by all.

Building begins within communities, and the Electoral Justice Project aims to hire politically savvy black organizers across the nation to help lead their efforts and build trust within the community. These organizers will train to grow their skill set and meet the standards allotted by the EJP.

3. Expand and mobilize the black electorate.

Trained leaders will travel across the U.S. to engage local voters on issues affecting the black community on both a local and national level. EJP will solely support campaigns that help enrich the black community by combatting voter suppression and affirming the political power within the black voter, which will encourage the mobilization of voters across the country.

Organizers, candidates, and black citizens will be investing in the development of their communities and lives through the impacts of leadership, representation, and connective messaging.

Kayla says that the biggest goals for the town halls are to provide an analysis of policies that have been passed under the current administration, specifically executive orders and changes made by the heads of those he’s appointed and their implications, to provide insight on state legislatures, and to survey black communities to gain insight on their needs. “We want to ask black people across the nation what they want,” Kayla says. “Is policing the issue? Is it housing? Is it transportation? What is the major conversation?”

During a live debate for a local circuit attorney campaign, Kayla noticed how a clear shift in language can make a huge difference. When topics of government and policies of the leaders were communicated in a way to the voters that they understood, their response to the candidate changed for the positive. The EJP’s objective centers around an upscaling of political education, and through this new generation of politically aware black citizens, a stance for equality.

“We want to get to a world where black people can live and thrive, and not be killed,” Kayla says. “We don’t have time to slack. And I’m committed to the idea that we’re going to win some huge victories.”

To find a town hall near you, visit The Electoral Project’s website or text EJP to 91990.