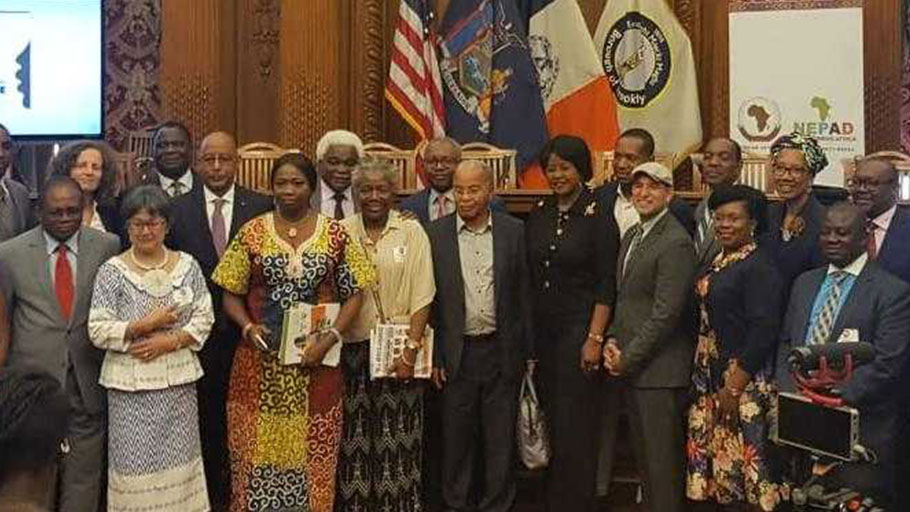 This year 2019 is significant as it marks 400 years since the first documented ship anchored the shores of America with chained slaves. Since they left through the Door of No Return, there is a mobilisation of African Americans to connect with Africa, through the Door of Our Return. Collaboration with the Diaspora in private sector, government, civil society is key in mobilising and sharing knowledge, expertise, technologies and economic resources to support the achievement of the sustainable development goals in Africa as articulated in the African Union Agenda 2063.

Hon Eric L. Adams, Borough President of Brooklyn, New York City. Former Democratic State Senator in the New York Senate, the first African American Borough President, opened the inaugural forum by declaring that, “The conversation we are having is more than just economics. It is about filling the gap that needs healing by overcoming self-hate. We need to stand together to overcome wrong thinking. We need to turn Africa into The Africa We Want.”

Dr Ibrahim Mayaki, CEO of the African Union Development Agency-NEPAD, gave a background on the origins of pan-Africanism, which has its roots in America and framed the founding of pan-African institutions including the Organisation of African Unity. “This forum then, with the diaspora in America, is therefore very much needed in the regional integration agenda that we are driving on the African continent.”

The diaspora has a critical role to play in national development. As such, globally, most governments make conscious efforts to incorporate diaspora groups as development agents and to mobilise cash and in-kind resources towards national development agendas. Africans outside the Continent have an estimated spending power of 4 trillion dollars. This means there is massive potential to leverage this capacity to facilitate collaboration and exchanges to contribute to Africa’s economic development.

In her address, Ambassador Arikana Chihombori, the Quo African Union Ambassador to the USA stressed that, “Africa will move quickly through the new vehicle of the African Continental Free Trade Area, which will give the Continent true economic independence, in which the diaspora will find more opportunities for investment as well.”

“After 400 years, we need to come out of enslavement with wealth,” was the message delivered by Rev Dennis Dillon, Economic Empowerment Activist, Co- Chair, Door of Our Return Foundation & Board member, Greater Harlem Chamber of Commerce. He added that “The Door of Our Return is all about Africans in America relinking with Africans on the African continent, joining forces with the African Union and African Union Development Agency-NEPAD to journey together towards The Africa We Want. It is time for us to have an economic revolution that begins now.”

Mr John Hope Bryant Founder, Chairman and Chief Executive Officer, Bryant Group Ventures, made a call for the doing away with of financial illiteracy that is a challenge for most people, declaring that financial literacy in needed in Africa at scale.

The objective of this intercontinental dialogue is to build a credible platform to stimulate partnerships and business networks to accelerate and support sustainable development and global partnership processes.

In closing, Dr Zienzi Dillon, Goodwill Ambassador for the African Union Development and Chief Executive Officer of Carmel Global Capital, reiterated that unity is key in turning the tide towards economic self-sustenance.

The African Union Development Agency-NEPAD attaches the greatest significance to the effective participation of the diaspora in Africa’s development and considers this Diaspora Economic Dialogue as a critical and vital element of the Agency’s global engagement strategy. Through opportunities presented by dialogue platforms like the Diaspora Economic Dialogue initiative, and effective collaboration with governments and people of different regions of the world in which Diaspora populations are located, opportunities can be unlocked to mainstream Diaspora participation in the development agenda.

This article was originally published by the African Union Development Agency (AUDA-NEPAD).