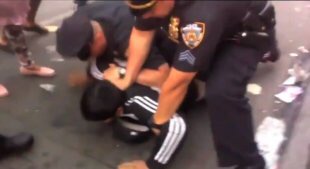 Police Brutality Against Street Vendors Gets Stark Exposure in Brooklyn

When an NYPD officer was caught on video kicking a man lying on the ground at a festival in Brooklyn Sunday night, it was seen as just another example of a cop abusing his power. But the 4:35 video of officers aggressively speaking with the vendors before taking Jonathan Daza down reminds many street service workers of how contentious their relationship with the NYPD can be.

Officers approached vendors demanding that they pack up their items.They were suppose to start packing at 6 p.m. but were given an extra hour. A female officer at the beginning of the video is seen yelling at the vendors, even when they claim they were leavng the area. One officer is then seen aggressively asking Daza’s younger sister how old she is. When Daza tells her she doesn’t have to give her age, the cop asked him to identify himself. It is unclear what Daza says in reply but the interaction quickly spiraled out of control and ended with him on the ground. That is when Officer Vincent Ciardiello, unprovoked, kicked him in the back.

He has since been suspended.

“I was very concerned by a video that was taken and the action of one of our officers who was seen kicking an individual,” Bratton said Wedesday. The NYPD internal affairs bureau is investigating the incident.

Sean Basinski, director of the Street Vendor Project, told AlterNet that his organization receives hundreds of complaints from vendors each year over what they feel is unfair treatment by police. What is unfortunate about Daza’s encounter with the cops, Basinski said, was the unnessarily aggresive tone towards the vendors.

“The female officer’s tone of voice was awful,” he said. “You don’t talk to people that way. And the way that the other officer got in there and started yelling at the girl, ‘How old are you?’ four or five times, really escalated the matter. It’s unbelievable.”

Will, who is a licensed vendor in the city and runs an ice cream truck, told AlterNet that not all officers are rude to him but the ones who are can be unbearable. He recalled a story when an officer, unprovoked, yelled profanity at one of his employees.

“What the fuck are you doing here. Didn’t I tell you not to be here. Cursing and what not,” Will recalls the officer saying. “So, he asked my boy for his licenses. The guy gave it to him, the officer went off and made a few phone calls. When the officer came back, he said, ‘Listen, I’m going to cut you a break.’ So my boy went to thank him and shake his hand and the officer threw his license back at him. This is the kind of treatment we go through.”

Will asked AlterNet not to print his full name for fear of reprisal.

John Scott, who has been vending for 11 years and sells jewelry in Manhattan, told AlterNet that many of the officers he deals with are courteous but it also depends on their mood. Some days they’re cool, others they are not, he added. The worse incident he’s experienced occured during his first year of vending, when a man walked by and grabbed a purse from his table. When Scott approached the man and demanded that he pay, he took out his badge and identified himself as a police officer. He then told Scott’s colleagues to “tell your boy to shut the fuck up.”

Scott says the officer ended up taking the bag and issued him a ticket before walking off.

“I was 23-years-old at the time and had just arrived in New York, so I didn’t know what the hell was going on, he said. “I was just so pissed off that my eyes started to water. I didn’t cry but I was pissed because I couldn’t believe what just happened.”

He eventually fought the ticket in court and won.

There are more than 20,000 vendors working in New York City, 95 percent of whom are immigrants, according to estimates by the Street Vendor Project. Anyone selling merchandise or food on a public street must have a license that is issued by the Department of Consumer Affairs. Artwork is an acception to this rule, as it is considered freedom of speech. Getting a license is tough and the waiting list can number in the thousands.

Vendors have long believed they’ve been under siege by New York City government. Former New York City Mayor Michael Bloomberg was seen as particularly adversarial, as he “quadrupled maximum fines for minor infractions like vending an inch too close to the crosswalk.” It remains to be seen how vendor’s relationship the current Mayor, Bill de Blasio, will unfold.

There isn’t much recent data or research on how street vendors in New York City feel about police but Muhammad Ali, a member of the Street Vendor Project and a licensed vendor, told AlterNet that many of his colleagues don’t speak English and may feel intimidated by the process of reporting an officer they believe violated their rights. Recently, he attended a community meeting organized by a police precinct in his area where he shared his complaints over police harassment.

He says his issues were addressed but many vendors wouldn’t have gone to the meeting at all.

“Not all of the vendors would be so brave go to that meeting and explain their problems,” he said. “It’s a big issue.”