Puerto Rico has not recovered from Hurricane Maria

You Are Here: Home » News & Current Affairs » Puerto Rico has not recovered from Hurricane Maria 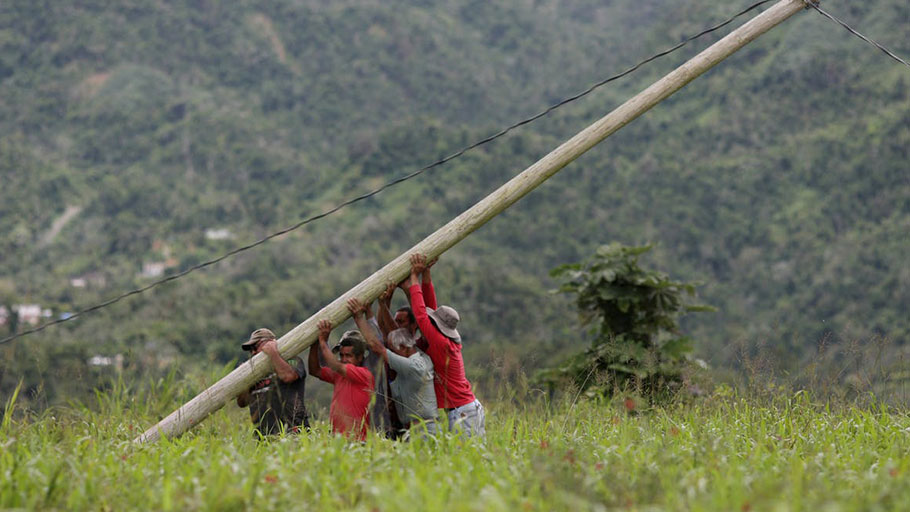 Some Puerto Ricans had to restore downed power lines themselves after Hurricane Maria. Alvin Baez/Reuters

By Lauren Lluveras, The Conversation —

Puerto Rico was in crisis long before Hurricane Maria hit on Sept. 20, 2017.

For years, this U.S. territory had been struggling with debt, economic crisis and drought. In May 2017, the government defaulted on US$73 billion in loans and declared bankruptcy.

Then Hurricane Maria slammed the island with 155-mph winds and coastal flooding that rose to 6 feet within 30 minutes of landfall. The storm caused the longest power blackout in U.S. history.

Sixty-four Puerto Ricans died during Maria and an estimated 2,975 Puerto Ricans perished from hurricane-related problems in the five months afterwards – many from treatable chronic illnesses because the power outage prevented them from getting antibiotics, insulin and other medical care.

To say that the island of 3.3 million has not yet recovered – from the damage or the trauma– is an understatement. One year after Maria, nearly every pillar of Puerto Rican society remains devastated.

Here’s a snapshot of Puerto Rico today, based on my academic research and visits to family who stayed on the island both during and after the hurricane. 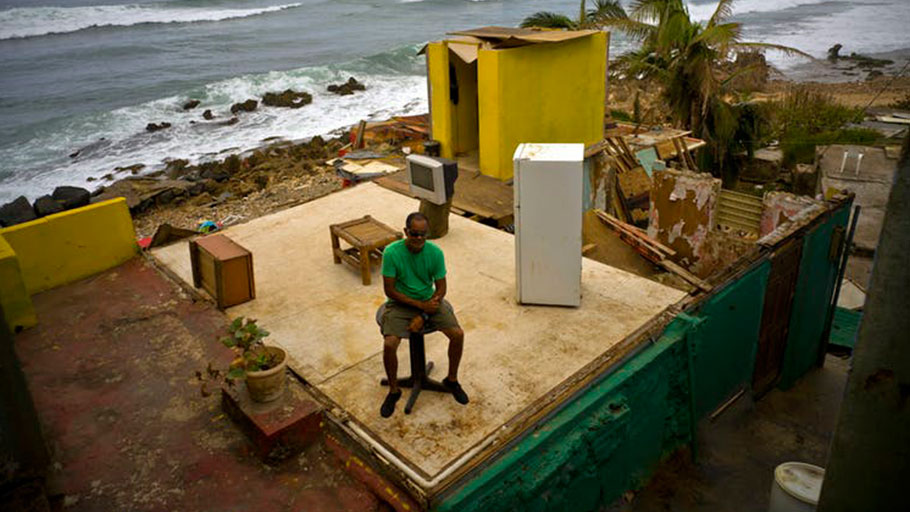 In this photo from October 2017, Roberto Figueroa Caballero sits in the ruins of his home after Hurricane Maria. (AP Photo/Ramon Espinosa, File)

A few months after Hurricane Maria, Puerto Rico’s government proposed significant changes to the fiscal plan put in place in 2017 by the federally appointed financial management board that has run Puerto Rico’s economy since its bankruptcy.

But the oversight board objected, calling certain proposals “inconsistent” with the fiscal board’s mandate to restructure the Puerto Rican economy.

Small businesses, the island’s main job creators, are struggling. Roughly 8,000 of Puerto Rico’s 45,000 small employers have closed up shop over the last year.

Four in 10 Puerto Ricans reported losing a job in the storm’s aftermath.

Overnight, farmers who were already struggling with climate change and lack of agricultural workers saw nearly 80 percent of their crops destroyed – a US$780 million loss.

There is one bright spot: For the first time since 2013, unemployment on the island is below 10 percent because rebuilding has created so many construction jobs. Those positions, however, are temporary.

All of Puerto Rico’s 93 clinics and hospitals have reopened since Maria.

But its health care sector remains devastated by the storm.

An estimated 500 to 700 physicians and surgeons out of roughly 10,000 on the island have left since Hurricane Maria. 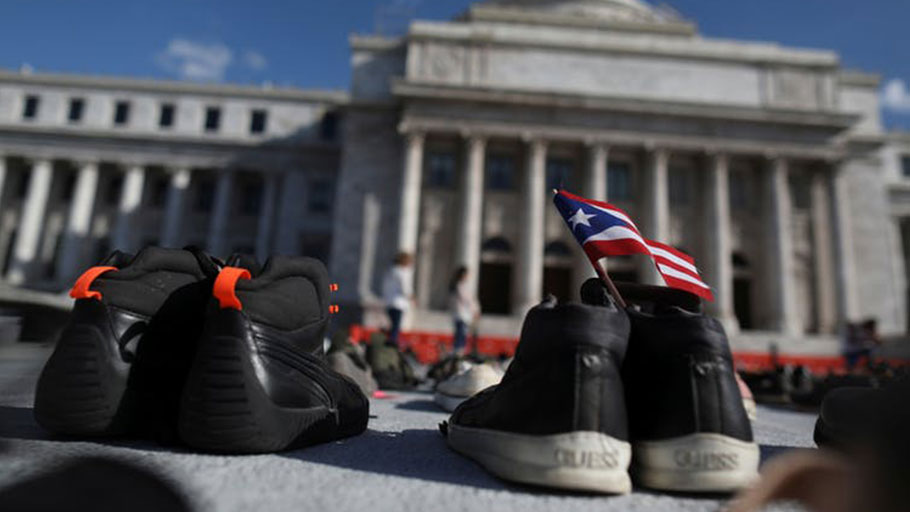 Activists put empty shoes outside the capitol building in San Juan, Puerto Rico, June 2018 to convey the toll of Hurricane Maria after a study estimated that the 2017 storm took thousands, not dozens, of lives. Reuters/Alvin Baez

According to Dr. Wendy Matos, executive director of the University of Puerto Rico’s faculty practice plan, most health service providers in Puerto Rico are privately owned. That means the bad news about shuttered small businesses and mass unemployment applies to the island’s health care sector.

Eleven months after Hurricane Maria knocked out Puerto Rico’s power, the island’s department of energy announced on Aug. 15, 2018 that electricity was fully restored.

Early on in the blackout, many Puerto Ricans hoped the power crisis would lead Puerto Rico to build a cleaner, more sustainable power grid. The island generates almost half of its electricity by burning oil or diesel. 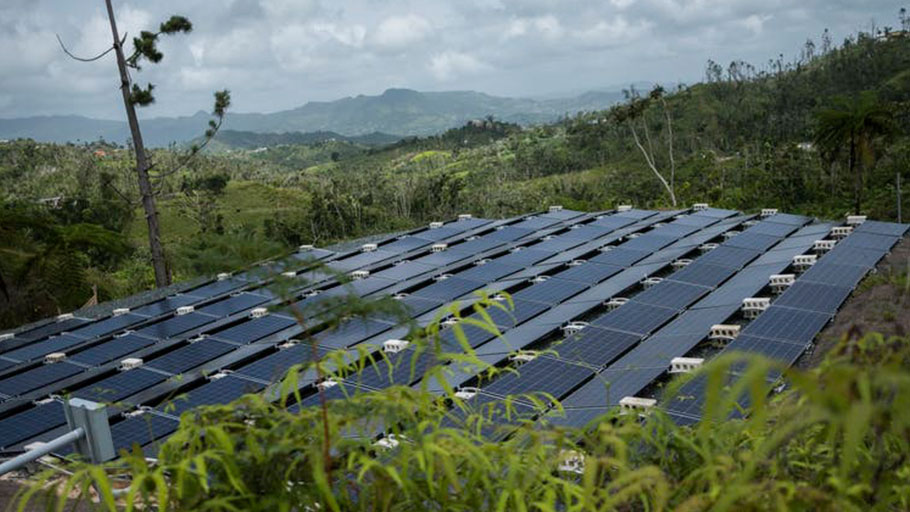 Instead, the island’s power authority struggled just to function, churning through three directors and five chief executives in the past year.

Some residents grew so tired of waiting for their lights to come on that they repaired power lines themselves.

On June 20, 2018, Gov. Rosselló signed a controversial bill putting the island power authority up for sale, saying it would allow the island to “jump into new energy models.”

Many islanders feared that privatizing the public utility would worsen its existing problems with mismanagement and corruption. Environmentalists counter the move actually stunts any hope of a green energy shift.

Half of the authority’s board members resigned in protest.

Education is another of Hurricane Maria’s casualties.

This past summer, Puerto Rico closed 283 schools – about a quarter of all public primary educational facilities – due to dropping enrollment.

Almost 39,000 fewer students registered for the 2018 school year, according to Puerto Rico’s Department of Education, presumably because their families emigrated.

The Department of Education says that its $300 million deficit, which existed prior to the hurricane, did not drive the school closures.

Hurricane Maria has brought new urgency to an old debate about Puerto Rico’s status as a United States territory.

The island is home to an estimated 2.5 million voting-age American citizens who cannot vote for any representatives in Congress. 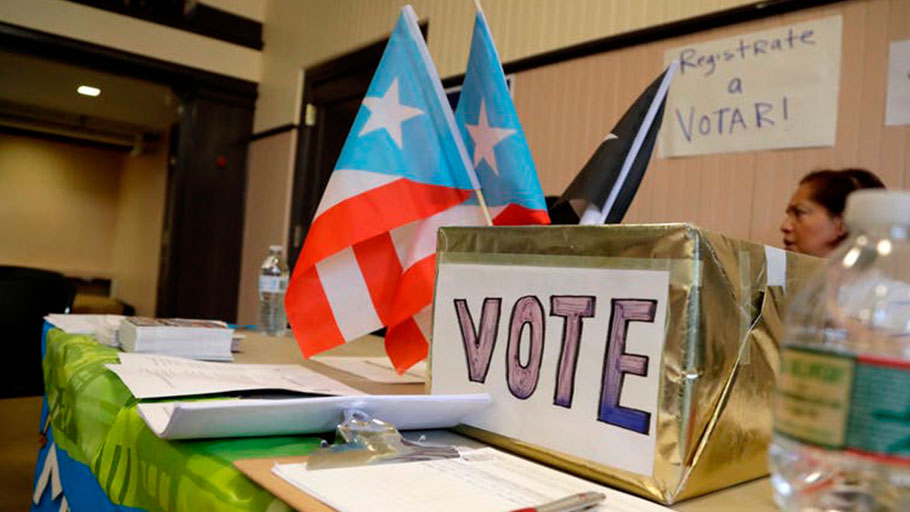 Puerto Ricans who fled the island for the U.S. mainland after Maria are eligible for the first time to vote in congressional elections. AP Photo/Julio Cortez

Many commentators have observed that Puerto Ricans’ lack of political representation may explain why the island’s recovery has lagged, equating its territorial status with second-class citizenship.

But the number of Puerto Ricans who can vote in federal elections is growing. An estimated 135,000 Puerto Ricans have moved to Florida, New York, Texas and Pennsylvania since Maria.

Voter advocacy groups are connecting with these new Latino voters ahead of the upcoming midterm congressional elections.

Before Maria, politicians may have found it easy enough to disregard Puerto Ricans. Now, they represent an angry and energized electorate in some of the country’s most important swing states.