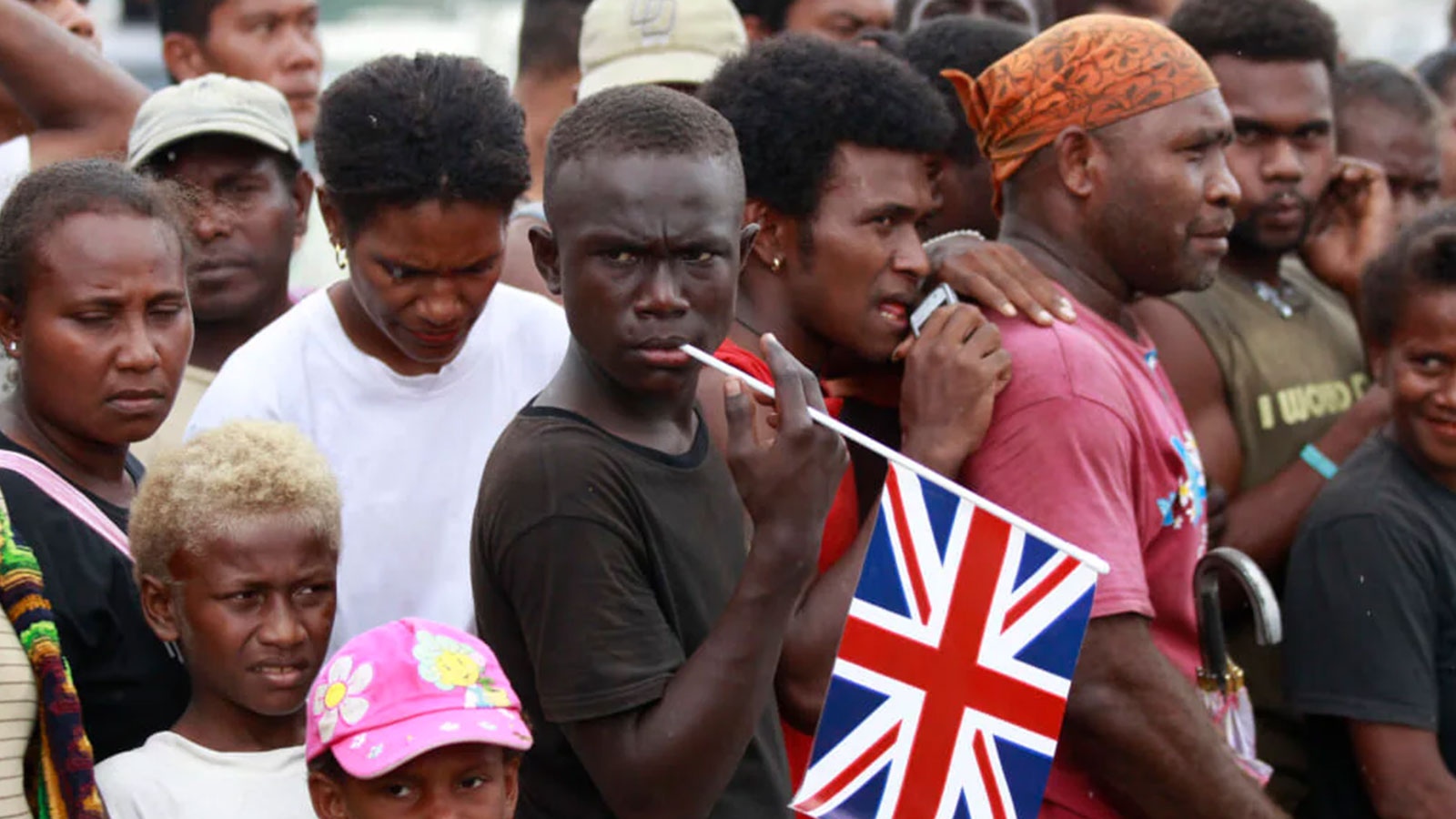 Yes, it’s the Queen’s Jubilee, but the Black people in former British colonies are not feeling it

You Are Here: Home » Blog » News & Current Affairs » Yes, it’s the Queen’s Jubilee, but the Black people in former British colonies are not feeling it

Britain’s image as a welcoming and diverse society has been battered by the revelation that possibly thousands, of people from the Caribbean were denied housing, jobs or medical treatment.

After seven decades on the throne, Queen Elizabeth II is widely viewed in the U.K. as a rock in turbulent times. But in Britain’s former colonies, many see her as an anchor to an imperial past whose damage still lingers.

So while the U.K. is celebrating the queen’s Platinum Jubilee — 70 years on the throne — with pageantry and parties, some in the Commonwealth are using the occasion to push for a formal break with the monarchy and the colonial history it represents.

“When I think about the queen, I think about a sweet old lady,” said Jamaican academic Rosalea Hamilton, who campaigns for her country to become a republic. “It’s not about her. It’s about her family’s wealth, built on the backs of our ancestors. We’re grappling with the legacies of a past that has been very painful.”

The empire that Elizabeth was born into is long gone, but she still reigns far beyond Britain’s shores. She is head of state in 14 other nations, including Canada, Australia, Papua New Guinea and the Bahamas. Until recently it was 15 — Barbados cut ties with the monarchy in November, and several other Caribbean countries, including Jamaica, say they plan to follow suit.

Britain’s jubilee celebrations, which climax over a four-day holiday weekend starting Thursday, aim to recognize the diversity of the U.K. and the Commonwealth. A huge jubilee pageant through central London on Sunday will feature Caribbean Carnival performers and Bollywood dancers.

But Britain’s image of itself as a welcoming and diverse society has been battered by the revelation that hundreds, and maybe thousands, of people from the Caribbean who had lived legally in the U.K. for decades were denied housing, jobs or medical treatment — and in some cases deported — because they didn’t have the paperwork to prove their status.

The British government has apologized and agreed to pay compensation, but the Windrush scandal has caused deep anger, both in the U.K. and in the Caribbean.

A jubilee-year trip to Belize, Jamaica and the Bahamas in March by the queen’s grandson Prince William and his wife Kate, which was intended to strengthen ties, appears to have had the opposite effect. Images of the couple shaking hands with children through a chain-link fence and riding in an open-topped Land Rover in a military parade stirred echoes of colonialism for many.

Cynthia Barrow-Giles, professor of political science at the University of the West Indies, said the British “seem to be very blind to the visceral sort of reactions” that royal visits elicit in the Caribbean. 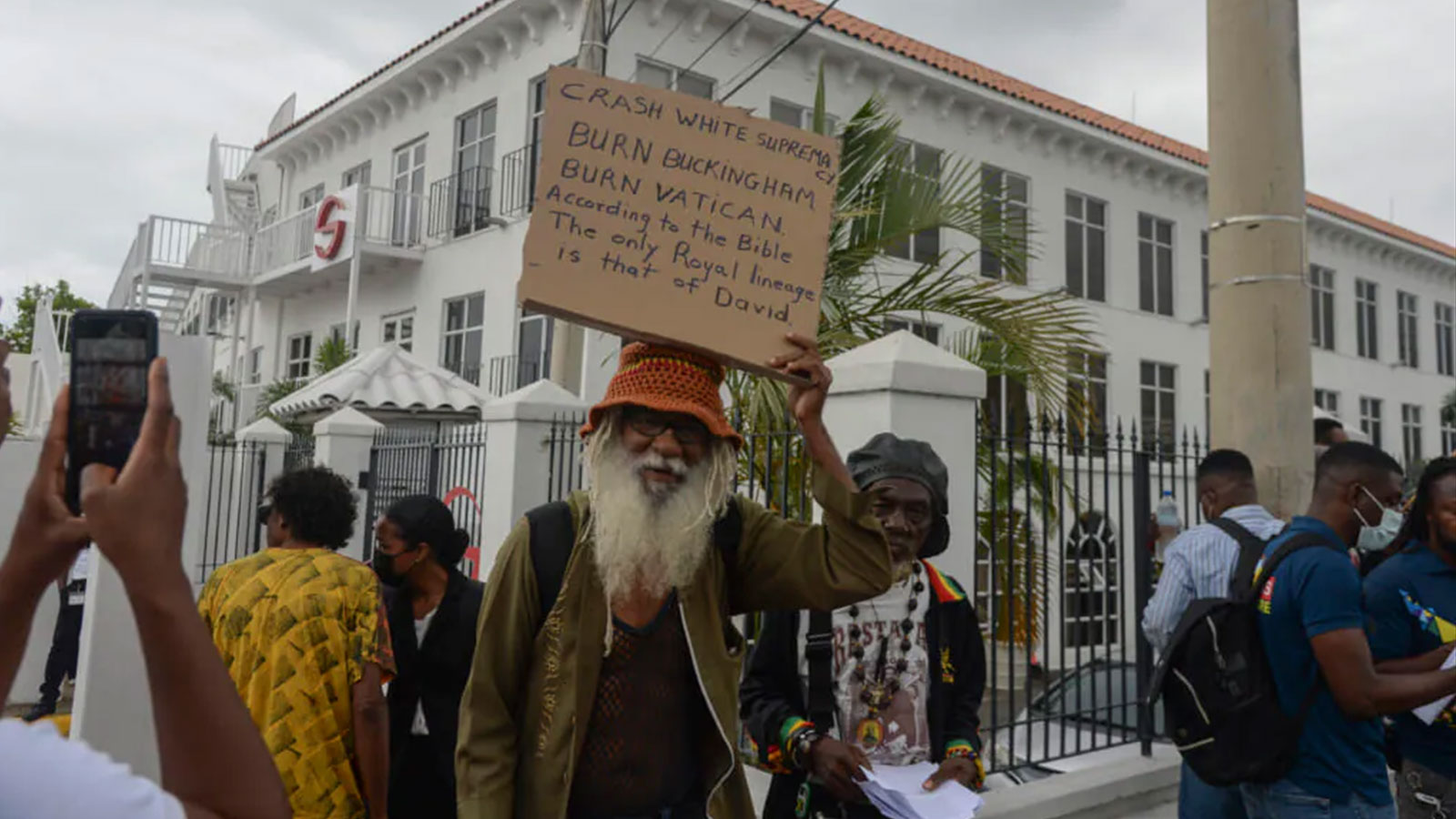 People protest to demand an apology and slavery reparations during a visit to the former British colony by the Duke and Duchess of Cambridge, Prince William and Kate, in Kingston, Jamaica, Tuesday, March 22, 2022. (AP Photo/Collin Reid, File)

Protesters in Jamaica demanded Britain pay reparations for slavery, and Prime Minister Andrew Holness politely told William that the country was “moving on,” a signal that it planned to become a republic. The next month, Antigua and Barbuda Prime Minister Gaston Browne told the queen’s son Prince Edward that his country, too, would one day remove the queen as head of state.

William acknowledged the strength of feeling and said the future “is for the people to decide upon.”

“We support with pride and respect your decisions about your future,” he said in the Bahamas. “Relationships evolve. Friendship endures.”

When then Princess Elizabeth became queen on the death of her father King George VI 1952, she was in Kenya. The East African country became independent in 1963 after years of violent struggle between a liberation movement and colonial troops. In 2013, the British government apologized for the torture of thousands of Kenyans during the 1950s “Mau Mau” uprising and paid millions in an out-of-court settlement.

Memories of the empire are still raw for many Kenyans.

“From the start, her reign would be indelibly stained by the brutality of the empire she presided over and that accompanied its demise,” said Patrick Gathara, a Kenyan cartoonist, writer and commentator.

“To this day, she has never publicly admitted, let alone apologized, for the oppression, torture, dehumanization and dispossession visited upon people in the colony of Kenya before and after she acceded to the throne.”

U.K. officials hope countries that become republics will remain in the Commonwealth, the 54-nation organization made up largely of former British colonies, which has the queen as its ceremonial head.

The queen’s strong personal commitment to the Commonwealth has played a big role in uniting a diverse group whose members range from vast India to tiny Tuvalu. But the organization, which aims to champion democracy, good governance and human rights, faces an uncertain future.

As Commonwealth heads of government prepare to meet in Kigali, Rwanda, this month for a summit delayed by the coronavirus pandemic, some question whether the organization can continue once the queen’s eldest son, Prince Charles, succeeds her.

“Many of the more uncomfortable histories of the British Empire and the British Commonwealth are sort of waiting in the wings for as soon as Elizabeth II is gone,” royal historian Ed Owens said. “So it’s a difficult legacy that she is handing over to the next generation.” 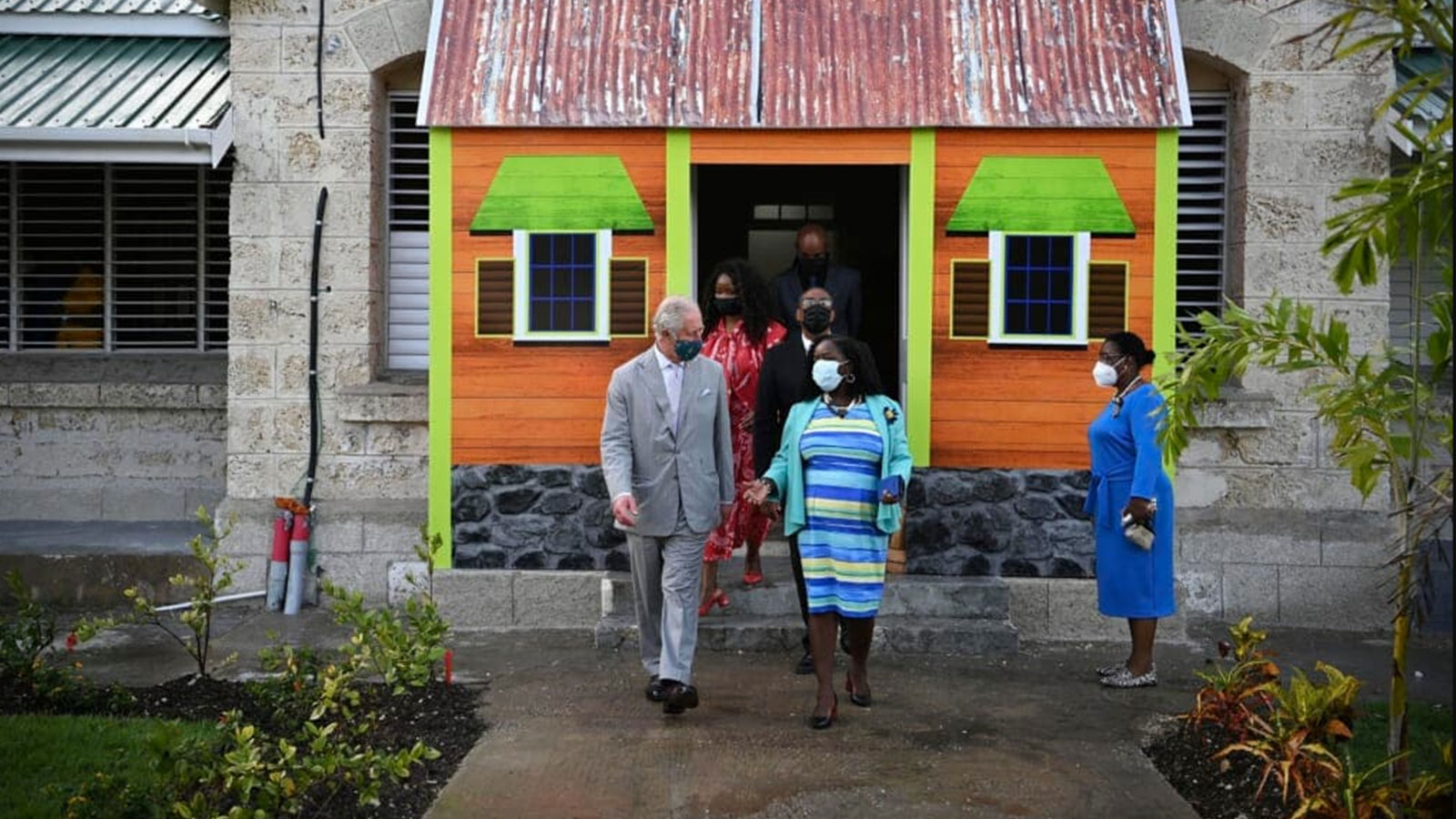 The crisis in the Commonwealth reflects Britain’s declining global clout.

Zimbabwe was suspended from the Commonwealth under its authoritarian late President Robert Mugabe, and is currently seeking readmission. But many in its capital of Harare have expressed indifference to the queen’s jubilee, as Britain’s once-strong influence wanes and countries such as China and Russia enjoy closer relations with the former British colony.

Sue Onslow, director of the Institute of Commonwealth Studies at the University of London, said the queen has been the “invisible glue” holding the Commonwealth together.

But she says the organization has proven remarkably resilient and and shouldn’t be written off. The Commonwealth played a major role in galvanizing opposition to apartheid in the 1980s, and could do the same over climate change, which poses an existential threat to its low-lying island members.

“The Commonwealth has shown a remarkable ability to reinvent itself and contrive solutions at times of crisis, almost as if it’s jumping into a telephone box and coming out under different guise,” she said. “Whether it will do it now is an open question.”

Cara Anna in Nairobi, Kenya, Alex Turnbull in Paris, and Andrew Meldrum in Johannesburg, contributed.
Source: Associated Press
Featured image: A well-wisher with a Union flag waits the arrival of Britain’s Duke and Duchess of Cambridge in central Honiara, Solomon Islands, Monday, Sept. 17, 2012. Many see Queen Elizabeth II as an anchor to an imperial past whose damage still lingers. (Daniel Munoz, Pool Photo via AP, File)