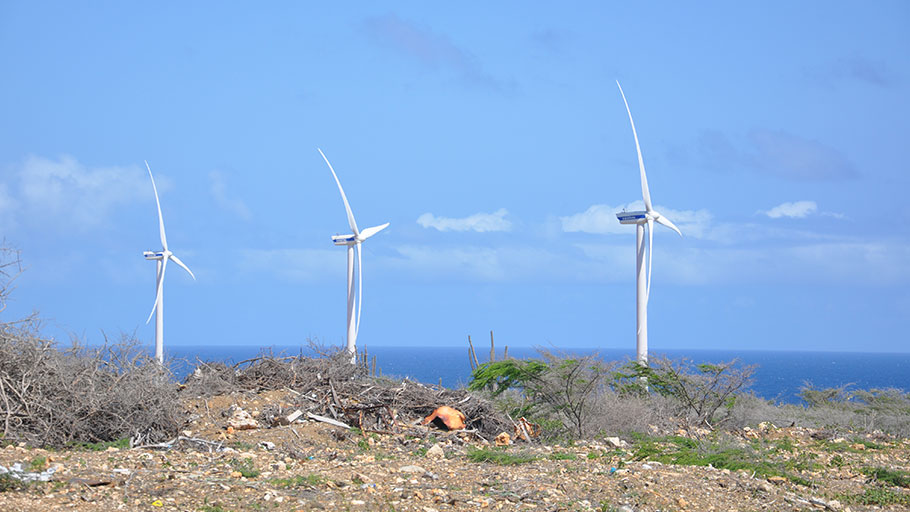 Renewables to Become the Norm for the Caribbean

You Are Here: Home » Blog » News & Current Affairs » Renewables to Become the Norm for the Caribbean

A wind farm in Curacao. Caribbean nations such as Jamaica are the most vulnerable to the effects of climate change and many are embracing renewable energy. Credit: Desmond Brown/IPS

Jamaica and other Small Island Developing States (SIDS) are embracing renewable energy as part of their plans to become decarbonised in the coming decades.

The Prime Minister of Jamaica, Andrew Holness, has committed the island nation to transitioning to 50 percent renewable energy by 2030.

“I believe that we can do better. Jamaica has sunshine all year round and strong winds in certain parts of the island,” Holness said.

Solar Head of State (SHOS), a nonprofit that helps world leaders become green leaders by installing solar panels on government buildings, has been assisting Jamaica and other Caribbean countries with their renewable energy transition.

James Ellsmoor, the group’s Director and Co-Founder, said they partnered with the Jamaica’s government to install and commission a state-of-the-art solar photovoltaic (PV) array at Jamaica House—the Office of the Prime Minister.

“Following similar installations by the President of the Maldives and Governor-General of Saint Lucia, Jamaica’s prominent adoption of solar, sets an example for other nations around the world that renewable energy can make a global impact,” Ellsmoor told IPS.

“While island nations such as Jamaica are the most vulnerable to the effects of climate change, this project is a reminder that they are also leading in finding solutions.”

Holness heralded the solar installation on his office as emblematic of the clean energy technologies that must be deployed by Caribbean nations to decarbonise economies, reduce regional fossil fuel use, and combat climate change.

“I have directed the government to increase our target from 30 percent to 50 percent, and our energy company is totally in agreement. So, I believe that by 2030, Jamaica will be producing more than 50 percent of its electricity from renewables.” 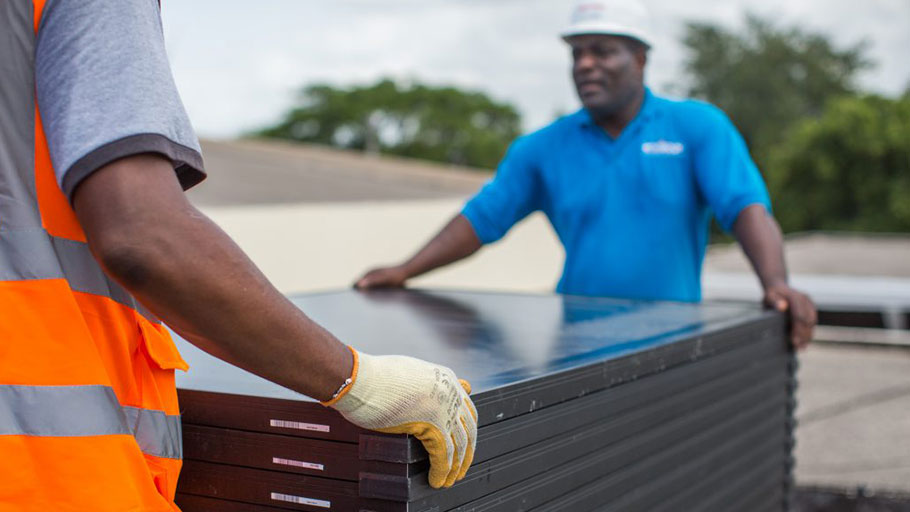 Peter Ruddock, manager of renewable energy and energy efficiency at the state-owned Petroleum Corporation of Jamaica, hailed the prime minister’s decision as a step in the right direction.

“We do have to look at our indigenous sources—the wind, the sun—it shows good leadership for the Office of the Prime Minister to be outfitted with solar panels, which will reduce their consumption,” Ruddock said.

Due to a historic lack of diversification of energy resources, Jamaica has been heavily reliant on imported fossils fuels, resulting in CO2 emissions and high electricity prices that are up to four times higher than the United States.

“We emit negligible greenhouse gases but when the impact comes we are most impacted,” Una May Gordon, Jamaica’s Director for Climate Change, told IPS.

“The prime minister believes in what we are doing. He believes that renewable energy has a role and a place in the Jamaica energy mix. A commitment has been made for transformation.

“We are building the resilience of the country. We have to transform a number of our production processes and the only way to do that is with renewables,” Gordon added.

SHOS believes the region’s youth can play a vital role in the climate change fight and has also conducted a solar challenge in partnership with Jamaica-based youth groups, which invited young people from across the island to create innovative communications projects to tell their communities about the benefits of renewable energy.

On the heels of a successful programme in Jamaica, SHOS is collaborating with the Caribbean Youth Environment Network (CYEN) to launch the Guyana Solar Challenge—a national competition in Guyana to engage and educate youth nationwide about the benefits of renewable energy.

“With our partners at CYEN we will run a Solar Challenge in every Caribbean country to educate young people about the benefits of renewable energy for their communities,” Ellsmoor told IPS.

“The economic and environmental conditions for the Caribbean are very specific to the region and often information coming from outside the region does not represent that. Launching this challenge in Guyana is particularly important as the country starts its journey into petroleum, and we want to show that the best opportunity is to invest these new funds into the sustainable development of the economy, and renewable energy is central to that,” he said.

The Guyana Solar Challenge is open to young people between 12 and 26 years of age. Competitors are asked to harness their creative energies (in any form such as a song/video, art installation, performance piece, viral meme, sculpture) towards raising awareness about renewable energy, specifically its potential to deliver long-term economic benefits, reduce harmful environmental impacts, and increase energy security and independence for Guyana. Winning projects will demonstrate creativity and an ability to educate the public about the specific benefits of solar energy for Guyana.

Sandra Britton, Renewable Energy Liaison at Guyana’s Department of Environment said she’s happy that young people are now taking the initiative to share the concept of renewable energy and to promote it as Guyana transitions to a green economy.

“We have developed the Green State Development Strategy, which will be rolled out shortly, and within the strategy it is envisioned that Guyana will try to move towards 100 percent renewable energy by 2040,” Britton said.