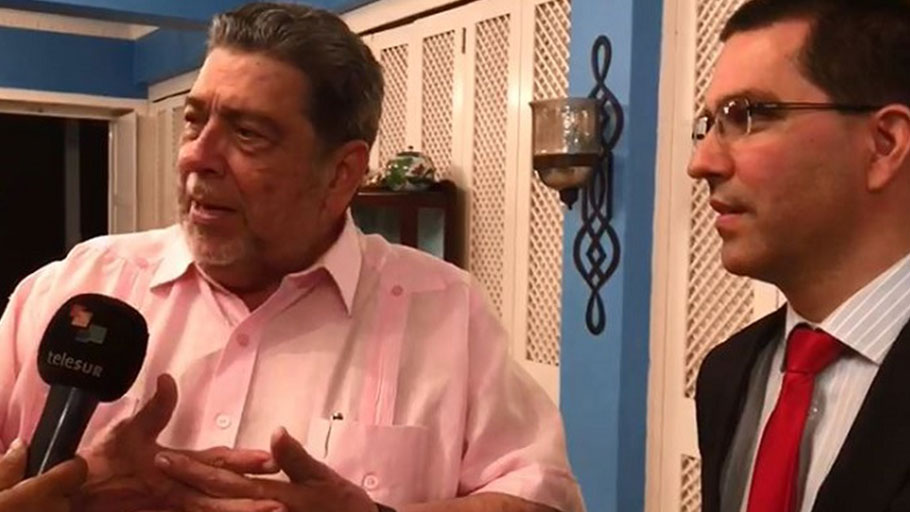 Ralph Gonsalves said that his government supports the sovereignty and independence of all nations against U.S. interference in internal affairs.

In an interview with teleSUR Friday Ralph Gonsalves, the Prime Minister of Saint Vincent and the Grenadines, stressed the importance of sovereignty and independence of Latin American and Caribbean states against U.S. interference, highlighting his country’s role in stopping the attempt by the Organization of American States to interfere in Venezuela’s internal affairs last year.

“Imperialism, historically in Latin America and in the non-english speaking Caribbean, has tended to want to have governments which are very compliant with their wishes and interests,” Prime Minister Gonsalves told teleSUR alongside Venezuelan Foreign Minister Jorge Arreaza as they attended meetings in .

“There is a long history and goes back to the 19th century. This is a phenomena in the U.S. foreign policy that they see Latin America and the Caribbean as their backyard or front yard but certainly as part of their yard which they should control. We do not share that perspective,” he added.

He spoke of the U.S. actions over the decades ousting progressive governments and installing right-wing dictators in countries such as Guatemala and Chile, while trying to do the same in Venezuela under former President Hugo Chavez and now under his successor Nicolas Maduro.

Venezuela and Saint Vincent and the Grenadines have “very strong relations” which were specially strengthened in early 2000s when President Chavez came to power and with the elections of Gonsalves’ Unity Labour Party.HaitiU

“Because of the similarity of the many of the profound ideas of Latin American and Caribbean integration and strengthening our independence and sovereignty that we have gotten closer and we have been very good partners,” he stressed.

He concluded by saying that while his government has “excellent relations with the U.S.” such ties are based on “mutual respect” while also rejecting Washington’s attempts of “interference in the internal affairs of another country.”

“All of us are nation-states with our own populations and our own special history and circumstances and must be respected,” the prime minister warned.