You Are Here: Home » Blog » News & Current Affairs » A Watershed Year for Black Women’s Political Power in the South 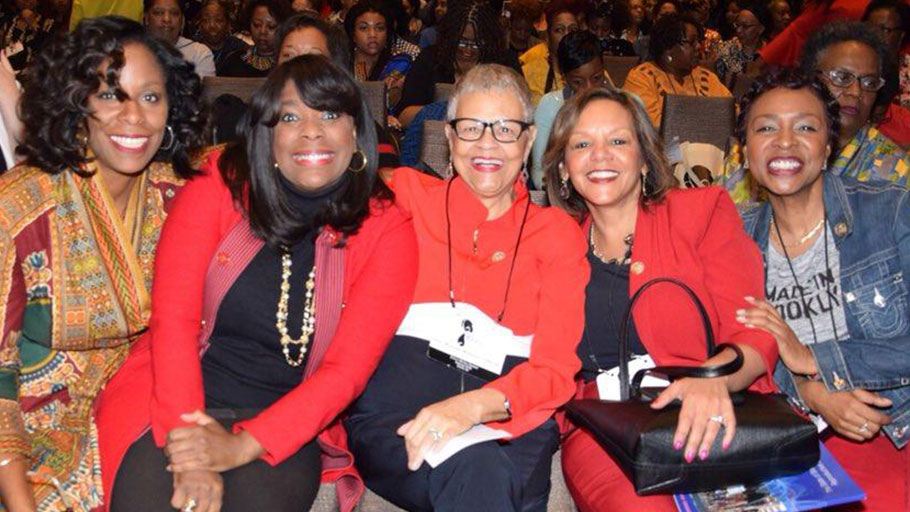 At the recent Power Rising Summit in Atlanta, U.S. Reps. Stacey Plaskett of the Virgin Islands, Terri Sewell of Alabama, Bonnie Watson Coleman of New Jersey, Robin Kelly of Illinois and Yvette Clarke of New York were among the nearly 1,000 Black women who gathered to strategize on how to build their political power. (Photo from Power Rising via Twitter.)

The recent Power Rising Summit in Atlanta brought together nearly a thousand Black women from across the country to strategize on how to build political power and harness the momentum behind the surge of Black women running for office.

From the onset of the women’s suffrage movement, Black women were among the strongest advocates for universal suffrage. Years before Black feminist scholar Kimberlé Crenshaw coined the term “intersectionality,” their lived experiences taught them the importance of the concept — that it was not enough to talk about the need for Black suffrage or women’s suffrage because choosing between one or the other would leave out those who lived at the intersection of those identities.

By 1913, even as Black men were being disenfranchised by Jim Crow laws across the South, women of all colors still did not have the constitutional right to vote. On March 3, 1913 — 105 years ago this month — thousands of suffragists from the United States and abroad flooded the streets of Washington, D.C., for the Woman Suffrage Parade. Planned for the day before President Woodrow Wilson’s inauguration, it was the first suffrage march held in the nation’s capital.

Male vigilantes taunted and assaulted the women and their allies as they paraded through the city. By the end of the march, over 200 women needed to be treated for injuries at the hospital.

The march and the brutality it was met with dramatized why it was so urgent for women to be granted the right to vote. But it also shed light on the hypocrisy of the white march organizers who protested their subjugation while simultaneously subjugating Black women who were told that, in order to appease racist white women, it would be best that they marched at the back of the procession. An indignant Ida B. Wells famously protested the march’s segregation.

Seven years after the parade, the 19th Amendment was passed, granting women the constitutional right to vote. But like their male counterparts, Black women in the South were still effectively disenfranchised by Jim Crow laws for another 45 years.

When the Voting Rights Act of 1965 (VRA) finally granted all Black women the right to vote, they wasted no time asserting their political power. In 1968, Shirley Chisholm, a Democrat from New York, became the first Black woman elected to Congress. In 1972, she became the first Black candidate to receive a major party’s presidential nomination and the first woman to run for the Democratic Party’s presidential nomination.

In the 50 years since Chisholm was elected to Congress, Black women have continued to make historic gains in U.S. politics. Those gains are documented in “The Chisholm Effect: Black Women in American Politics 2018,” a new report from the Higher Heights Leadership Fund and the Center for American Women and Politics at Rutgers University in New Jersey.

Black women also serve as mayors in five of the nation’s most populous cities, three of which are in the South: Atlanta; Baton Rouge, Louisiana; and Charlotte, North Carolina. Meanwhile, Black women voted at the highest rates of any demographic group in the 2008 and 2012 elections, and it was their record turnout that determined the outcome of last year’s special U.S. Senate election in Alabama won by Democrat Doug Jones.

But disparities persist. Although Black women make up 7.3 percent of the U.S. population, they account for less than 5 percent of those elected to statewide executive offices, Congress, and state legislatures. Only 12 Black women have ever held statewide executive offices, and only two of these women — both Republicans —  were elected in Southern states: Jennifer Carroll, who served as Florida’s lieutenant governor from 2011 to 2013, and Jenean Hampton, who has served as Kentucky’s lieutenant governor since 2011.

To date, no Black woman has ever been elected governor in the United States — but that may soon change.

There are over 245 Black women running for public office across the South this year, according to a database created by a group of Black women inspired by their key role in Jones’ Alabama win. Among the strongest contenders is Georgia gubernatorial candidate Stacey Abrams, an attorney, businessperson and former Democratic state legislator who became the first woman to lead either party in the state legislature and the first African American to lead in the state House.

Abrams resigned from the legislature last year to focus on the race and has been named one of the 10 candidates to watch this year by Politico. Her opponent in the Democratic primary set for May 22 is attorney Stacey Evans — a former Democratic member of the Georgia House who is white.

At the recent Power Rising Summit in Atlanta that brought together nearly a thousand Black women from across the country to strategize on how to build political power and harness the momentum behind the surge of Black women running for office, Abrams received a rousing ovation from the crowd. She told those gathered that her quest is bigger than herself.

“Even if our paths to getting where we’re going are different, I believe we are all going to the same place,” she said. “We want justice and love and liberation for everyone.”

Sons of Rich Black Families Fare No Better Than Sons of Working-Class Whites
We Need Your Support — Donate, Share, Sign-Up Ways to Support