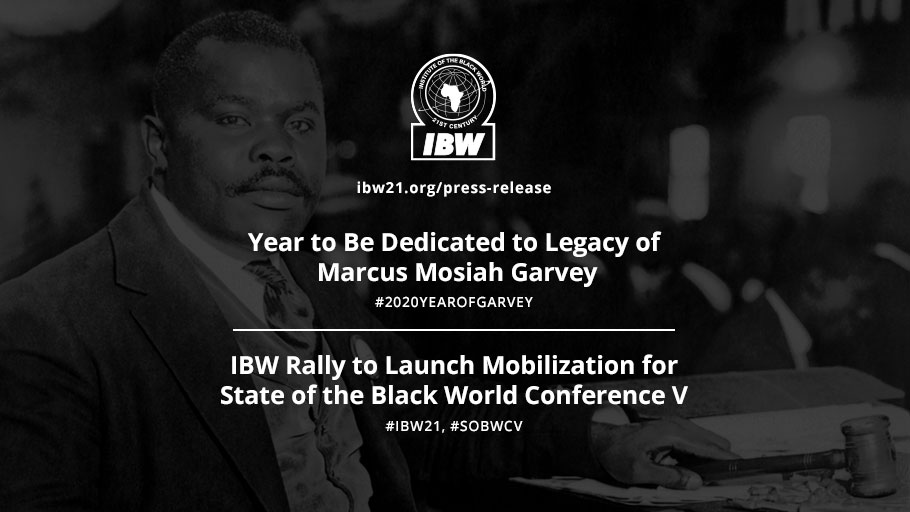 Press Release: 2020 The Year of Garvey, IBW Rally to mobilize for SOBWC V

Year to Be Dedicated to Legacy of Marcus Mosiah Garvey

State of the Black World Conference IV (SOBWC IV) was also convened in Newark in 2016. “We selected Newark for the last Conference because of the history of rebellion, resistance and resiliency of Black people in this city and the progressive policies of Mayor Ras J. Baraka, son of Amiri Baraka, one of the greatest cultural artists and revolutionary leaders in the era of the 60’s and beyond,” Dr. Daniels commented. “We return to Newark because the hundreds of Participants who attended SOBWC IV embraced the Declaration of Intent and Call to Action which  mandated a focus and commitment to work with Mayor Baraka to make Newark a model for progressive social, economic and political development for Black people and marginalized communities,” he continued. True to that commitment, since 2016, IBW convened a Marshall Plan Symposium and Economic Summit in 2018 and a National Emergency Summit on Gentrification in 2019, which focused national attention on Newark.

Daniels also announced that IBW is dedicating SOBWC V to the life and legacy of Marcus Mosiah Garvey, the Jamaican born leader who founded the Universal Negro Improvement Association and African Communities League (UNIA-ACL) which rapidly developed into the largest mass-based, organization of people of African descent in the history of the U.S. and globally. The UNIA-ACL was completed financed by Black people. In 1920 Garvey took the extraordinary step of convening an International Convention of the Negro People of the World which attracted more than 2,000 delegates from Africa, the Caribbean, Great Britain, France and the U.S. The Convention began with a rally at Madison Square Garden which drew some 25,000 attendees.

“In commemoration of the anniversary of this amazing feat and the vision and accomplishments of Marcus Mosiah Garvey, IBW is declaring 2020 The Year of Marcus Garvey and urging Black organizations in the U.S. and the Pan African World to join us in mounting a year-long educational campaign to teach our people about this remarkable leader and to rekindle a spirit of self-support for Black organizations and institutions in his memory,” Daniels noted. “We intend to utilize the educational campaign as an organizing tool leading straight into SOBWC V,” he concluded. Dr. Julius Garvey, son of Marcus Garvey, a retired surgeon and highly acclaimed Pan Africanist in his own right, has agreed to serve as the Honorary Chairman of SOBWC V.  IBW intends to invite at least two heads of state from Africa and two from the Caribbean to attend and address the Conference.

Organized around the theme Reimagining Marcus Garvey’s Vision for Black Empowerment, Dr. Daniels indicated that the goal of the March 7th Rally is to enlist the support of IBW friends, allies and supporters in the greater New York/New Jersey area and nationally to organize to make SOBWC V one of the most significant and impactful gatherings of people of African descent in the 21st century.

Speakers for the Rally, which will be live streamed via the IBW website at www.ibw21.org, will include: Dr. Julius Garvey, son of Marcus Garvey; New York State Assemblyman Charles Barron; Monifa Bandele, Movement for Black Lives (M4BLs Policy Table;  Larry Hamm, Chairman, People’s Organization for Progress (POP), Fredrica Bey, Founder of Women in Support of the Million Man March (WISOMMM); Barbara King, former Director, Newark’s African Commission; Dr. Monique Swift, Convener, SOBWC V, Local Host Committee; and, Paramount Chief, Dr. Leonard Jeffries. Dr. Ron Daniels will deliver the Keynote Address: Embracing the Vision and Mission of IBW. Afiya Dawson, Senior Minister, House of the Lord Church, will Moderate the Program. “The Rally is free and open to the public, but in the spirit of Marcus Garvey, we are appealing to our friends and supporters to come prepared to make a contribution to help raise the resources to really make SOBWC V an historic event,” Dr. Daniels stated. “Up you mighty race, you can accomplish what you will.”