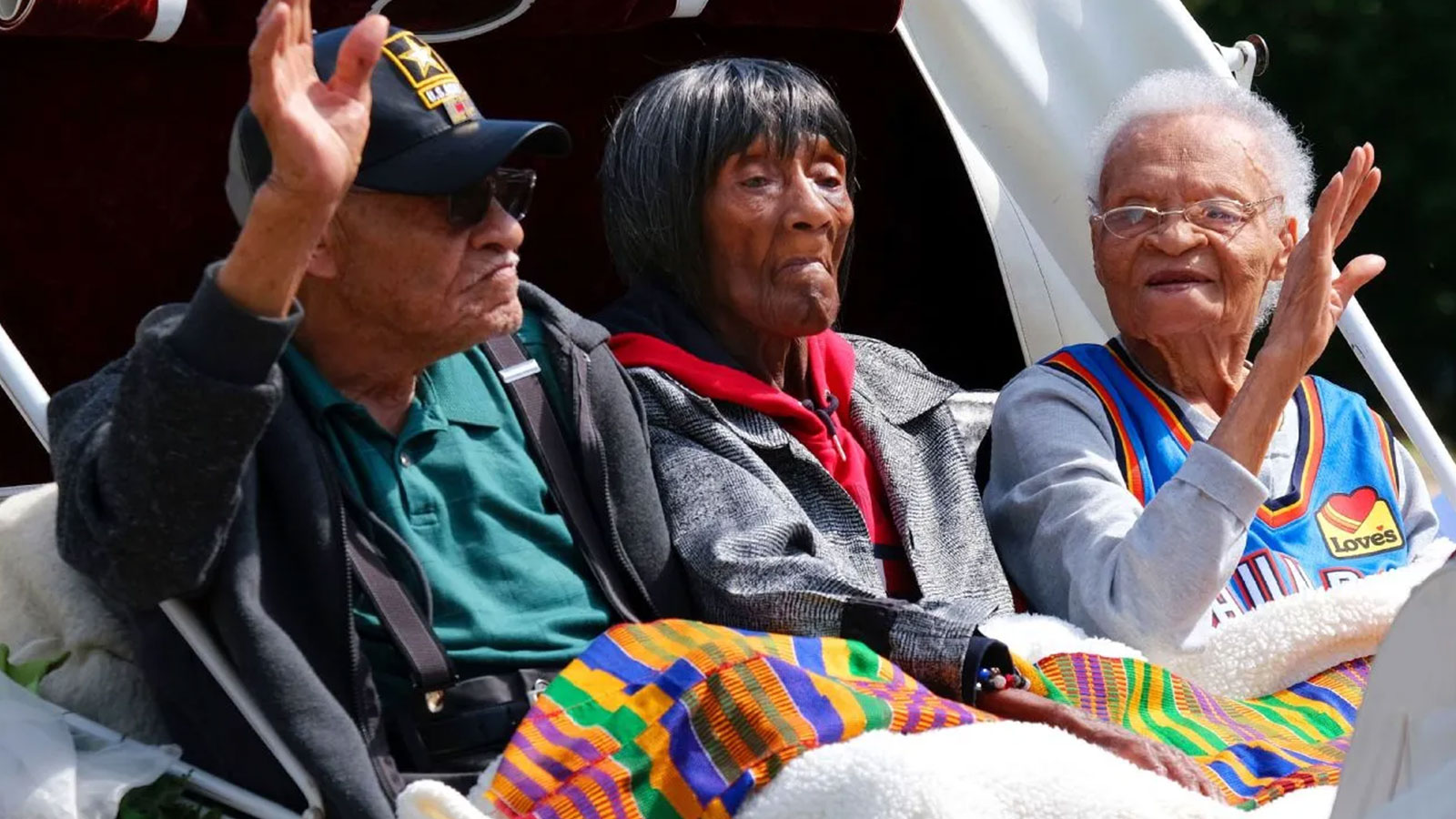 Does a foundation’s $1 million gift to Tulsa Massacre survivors count as reparations?

You Are Here: Home » Blog » Reparations » Does a foundation’s $1 million gift to Tulsa Massacre survivors count as reparations?

While the money is welcome, some argue the people and governments who committed the wrongs still need to pay up.

When a nonprofit organization gave $1 million to three survivors of the Tulsa Race Massacre recently, it was called many things: a blessing, generous, heartfelt, inspiring.

But was it reparations?

How to best describe the gift carries more than symbolic weight. As a national movement grows to compensate and repair Black communities for centuries of enslavement and government-backed racism, there are many views about what reparations should look like, and who should fund them. The debates will shape what, if anything, Black people eventually receive: taxpayer cash, community health clinics, educational scholarships or philanthropic donations like the one handed out in Tulsa, Oklahoma.

The $1 million check was presented in May to 108-year-old Viola Ford Fletcher, 107-year-old Lessie Benningfield Randle and 101-year-old Hughes Van Ellis. They are the last known survivors of the 1921 massacre, in which hundreds of Black people were killed and Greenwood, one of the most prosperous African American communities ever seen, was utterly destroyed. The check came from the Business for Good Foundation, based in New York state, whose co-founder recently learned about the survivors’ ongoing lawsuit seeking reparations and was moved to open his checkbook.

Several people who spoke at the ceremony where the check was presented were clear that the gift – one of several the survivors have received – should not be considered reparations. That view is shared by Kristi Williams, a Tulsa community activist and reparations advocate.

“Reparations is cash and land from the very systems or people that did the oppression,” Williams told me. “That’s accountability. If I did something to hurt you, I need to be the one to fix it. Even if it was from my ancestors and I’m benefiting from the harm they did to you, I need to fix that.”

She was glad the survivors were sharing the money, but “I think that makes it easier for Tulsa to make an excuse not to pay. Those people from New York didn’t do the harm. It’s past time for Tulsa to own up to that.”

Roy Brooks, a law professor at the University of San Diego and author of the book Atonement and Forgiveness: A New Model for Black Reparations, helped file a lawsuit by survivors against the city of Tulsa and the state of Oklahoma that failed due to the statute of limitations. He described two schools of thought on reparations, the “tort model” and the “atonement model.”

The tort model seeks to legally force perpetrators to pay restitution. It’s based on the structure of civil lawsuits, which often are resolved by cash payments.

“Under the atonement model, a reparation has a very special meaning,” Brooks said. “It is the revelation and realization of an apology. And then some redemptive act to make the apology believable. That redemptive act is the reparation.

“Reparations are limited only by the human imagination.”

In 2021, Tulsa Mayor G.T. Bynum IV apologized for the massacre during a centennial observance. The violence, sparked by a dubious accusation of wrongdoing against a Black man, was encouraged and left to run its course by city officials. Some people deputized by the city and National Guard participated in the mayhem. The city and state have adamantly fought paying financial reparations, instead choosing to build a history center and encourage real estate projects in Greenwood that are mostly owned by white entrepreneurs.

Ron Daniels, convener of the National African American Reparations Commission, had mixed feelings about the recent Tulsa donation. “One is exhilaration that these families are going to receive something. I mean, this is one of the most horrific assaults on Black people in the history of this country. And for it to go on for this long, over 100 years, is just unconscionable.

“But this does not exonerate them, the city or the state, or indeed any corporations that directly were complicit, from responsibility.”

Daniels’ definition of reparations: “Within the context of international law, it is repair for the physical, spiritual, cultural, psychological damage, including to the identity of a group of people, perpetrated by one group or institution or nation against another.”

In his view, the repair has to be defined by the injured party, he said – “the perpetrator of the harm cannot define the remedy.” And he observed that there has been a flurry of recent “reconciliation” efforts under the banner of reparations.

“We’ve had to remind people that reconciliation is not the beginning of the process. It’s the end of the process,” Daniels said. “You can’t reconcile until you have acknowledged the harm, apologized for the harm, and then entered into negotiations around restitution and redress and repair.”

The concept of a process is shared by Jeffrey Prager, a UCLA sociology professor who studies reparations. “It’s not about money alone. It’s really about the idea that a community or individuals, or in this case this charity group, are willing to acknowledge that a wrong had been done, and that there needs to be steps taken to attempt to repair the wrong. It’s not just about giving back money lost, it’s to demonstrate the recognition that there’s a whole series of ways in which the nation or cities or individuals can seek to heal these enormous wounds.”

So this Tulsa gift could be considered part of the reparations process? “Absolutely,” Prager said.

All these various interpretations come as at least 11 cities are considering how to pursue reparations, and as the decades-old federal H.R. 40 bill, which would set up a process to study reparations at the national level, inches toward a vote in the House. There is still an overwhelming resistance from most white Americans to cash restitution, which may be pushing other remedies to the forefront because they are more easily obtainable. In California, which passed a law to study reparations and make recommendations on how to implement them, a majority-Black panel has barely been able to agree on who should be eligible. Evanston, Illinois, is using a marijuana tax to give Black residents funds for real estate purchases and improvements, even as prominent Black scholars insist the program is “piecemeal and misleading.”

Still, in terms of the most recent Tulsa donation, nobody is begrudging these elders the money that came their way. Even if it was 101 years later.

“I have this strange hope,” said Williams, the activist, “that the city and the state learned a lesson: If random strangers can do this, why can’t we do something?”