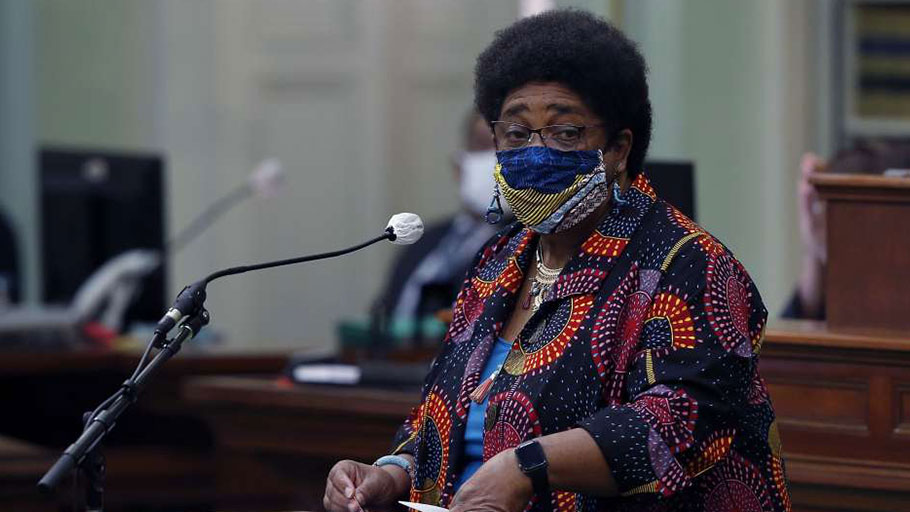 California legislators approved a bill that would create a task force to study reparations for slavery for African Americans, a measure intended to eliminate disparities that linger more than 150 years after an economic and social system that kept Black people in bondage was banished.

Separately, lawmakers also sent a bill to Gov. Gavin Newsom requiring corporations in the state to increase diversity on their boards of directors starting next year — another measure that gathered momentum in the Legislature when protests erupted nationally over racial inequality after a white police officer in Minneapolis killed George Floyd, a Black man, by kneeling on his neck during an arrest.

The Legislature passed both bills as it considered hundreds of measures before the mandatory end of its session at midnight Monday. In a session interrupted twice by the coronavirus pandemic, the Legislature found itself running short on time to address the biggest policy issues of the year.

Among the bills that were unresolved late into the night were measures that would prevent evictions for out-of-work Californians and would create a process to strip police officers of their badges for breaking the law.

As the state Senate broke for dinner Monday evening, Democrats moved to limit debate on bills in order to squeeze in the rest of the agenda before midnight, earning a sharp rebuke from Republicans who said they were being silenced. Tension had been bubbling for days — since most of the GOP caucus was ordered to work from home after being exposed to a coronavirus-positive colleague — and when the debate-limiting measure was raised, GOP Sen. Melissa Melendez of Lake Elsinore (San Bernardino County) complained, “This is bulls—.”

When the Senate returned, Democrats rescinded the debate-limiting move.

The reparations study, AB3121 by Assemblywoman Shirley Weber, D-San Diego, received final legislative approval Sunday night on a 52-9 vote in the Assembly. It would direct a task force to study the history of slavery and its enduring inequities for African Americans, and recommend who should be eligible for reparations and the form of compensation. The task force would be appointed by the governor and legislative leaders.

Weber, who chairs the Legislature’s Black caucus and is a retired professor of Africana studies at San Diego State University, said the committee’s work would help California “begin to address the disparities born of a shameful history.”

“Apology is important,” Weber said in a statement. “So are an accurate and public account of the violations along with commemoration and redress to those harmed.”

Major bills in the Legislature

Here’s how the Legislature acted on notable bills as its annual session ended Monday. All approved bills head to Gov. Gavin Newsom, who has until Sept. 30 to decide whether to sign them:

Approved a proposal allowing transgender people in state prison to decide whether to be housed among men or women. Advocates said SB132 is necessary because transgender women are often raped and assaulted when housed in men’s prisons.

Unanimously passed SB932 by state Sen. Scott Wiener requiring health workers to ask patients infected with the coronavirus or some 90 other diseases about their sexual orientation and gender identity. LGBTQ advocates say the bill is needed to understand the disease’s impact on their community.

Sought to increase pressure on gunmakers to embrace bullet-tracing technology known as microstamping. AB2847 would require that semiautomatic pistols sold in the state leave a single unique imprint on bullets that are fired rather than two, as currently required. The marking, which reveals a gun’s make, model and serial number, are meant to help law enforcement investigations.

The task force’s recommendations would go to the Legislature by June 2022. The committee would also educate Californians about the legacy of slavery and how the state enabled the institution.

Earlier this summer, Weber said Floyd’s killing in Minneapolis and ensuing protests over police brutality showed how little progress America has made in addressing racism.

“Every incident brings me back to the same spot,” Weber said. “This country has taught itself to hate African Americans and to deny the history that has brought us here.”

The bill, which passed the Assembly on a 52-9 vote, with most Democrats in support and nine Republicans in opposition, now heads to Newsom. He has until Sept. 30 to decide whether to sign the measure.

The Assembly also voted Sunday night to give final legislative approval to AB979 would require corporations headquartered in California to have at least one board member from an underrepresented community, such as people of color or LGBT people, by the end of 2021.

Corporations would be fined if they fail to comply, and the target would increase in 2022, requiring at least two or three directors from underrepresented communities, depending on the size of the board.

The bill passed 51-6, with most Democrats in support and all the “no” votes cast by Republicans. Newsom also has until Sept. 30 to decide whether to sign it.

Assemblyman Chris Holden, D-Pasadena, introduced the bill after Floyd’s death. He said some corporations, particularly big tech firms, have not acted with a “sense of urgency” when it comes to diversity on their boards.

Holden said that while the Legislature has sought to confront the issue of policy brutality with other bills, they must also confront inequities that keep African Americans out of powerful institutions.

Holden’s bill is based on SB826, a law passed in 2018 that set similar benchmarks for hiring women for the boards of California corporations. The number of female directors increased by at least 23% in the first year. Developing a pipeline of candidates has become a priority for Jennifer Siebel Newsom, wife of Gov. Gavin Newsom.

The law was challenged in court last year by the Pacific Legal Foundation, a libertarian nonprofit, which argued that the quotas violated the equal protection clause of the U.S. Constitution in addition to being “deeply patronizing to women.” The case has not yet been decided.

As time ran short in the session Monday, the Senate passed AB3088, a deal that emerged late last week to grant tenants who have lost income because of the pandemic a reprieve on their missed rent and give them five more months before they must start paying again in full.

The bill, which would take effect immediately and prevent evictions that could otherwise resume this week, still had to pass the Assembly by midnight to be sent to Newsom, who previously promised to sign it into law.

Among other bills that were still awaiting final legislative action was SB731 by Sen. Steven Bradford, D-Gardena (Los Angeles County), which would create a process to strip the badges from police officers who break the law and eliminate their legal immunity for injuring a suspect.

The measure was a priority for activists who hoped to change policing practices in California in the wake of Floyd’s death, but it encountered substantial opposition from law enforcement groups who said it would make it too difficult for officers to do their jobs.