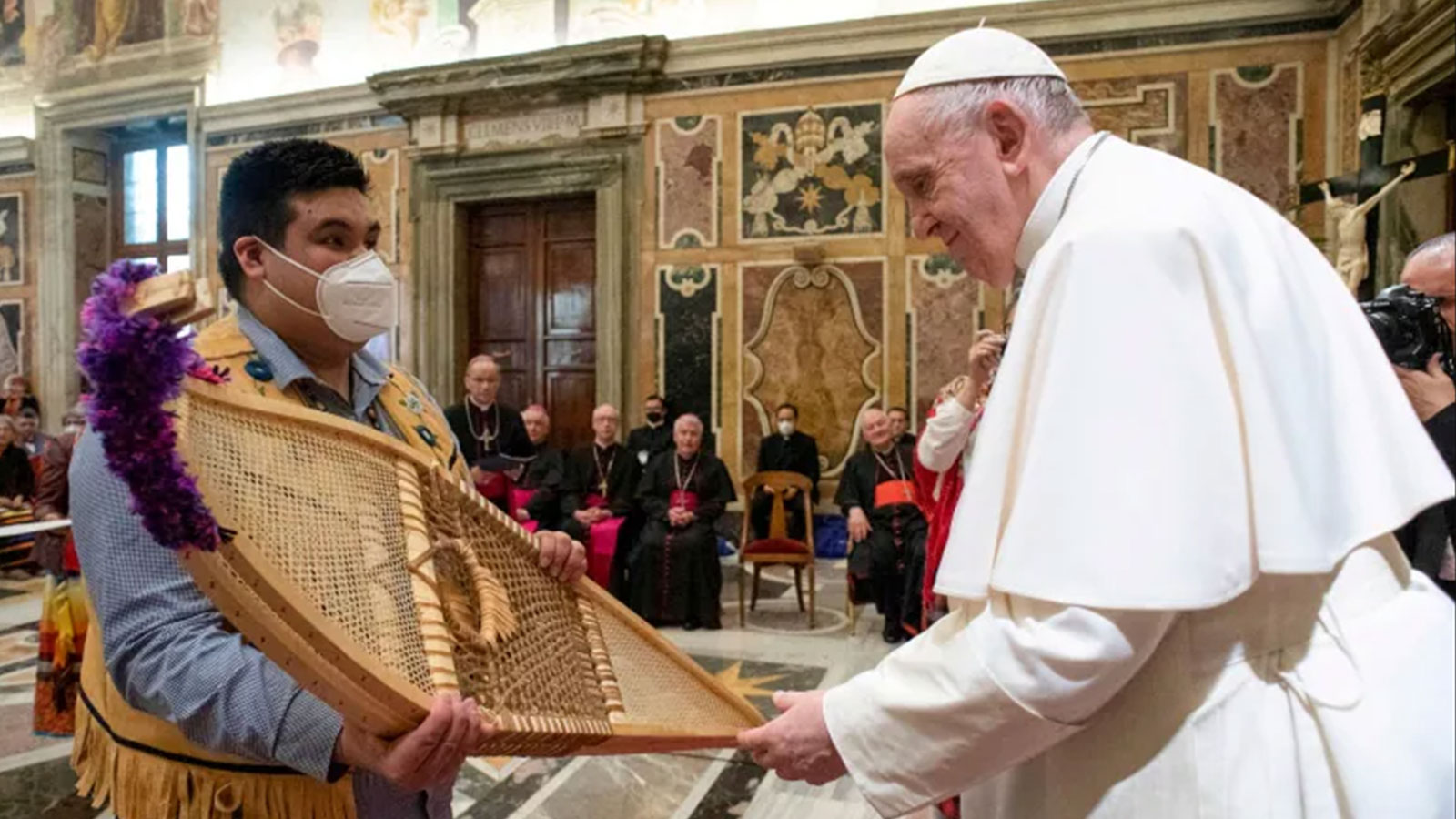 The Pope’s “punishing pilgrimage” will focus on reparations, observers say

You Are Here: Home » Blog » Reparations » The Pope’s “punishing pilgrimage” will focus on reparations, observers say

It’s been 35 years since a papal visit to an Indigenous community in Canada.

The last time a pope visited an Indigenous community in Canada was in 1987, when John Paul II stopped in Fort Simpson, N.W.T., on Dehcho First Nations land.

There, he praised the role of Catholic missionaries, saying the “revival of your [Indigenous] culture and traditions that you know today is largely due to the initiatives and continuous efforts of missionaries.”

“[Your ancestors],” he said, “knew by instinct that the gospel, far from destroying their authentic values and customs, had the power to purify and uplift the cultural heritage which they had received.”

Thirty-five years later, Pope Francis is expected to deliver a markedly different message on his first visit to Canada and Indigenous communities, a trip that the Roman Catholic leader recently referred to as “a penitential pilgrimage.”

A trip of spiritual penance.

“Historically, papal trips were all about the enhancement of the authority of the pope … created to make everyone understand how great the pope is, the Catholic Church is,” said Massimo Faggioli, Vatican expert and professor of theology at Villanova University in Pennsylvania. “This trip … is one of spiritual humiliation, in a good sense.” 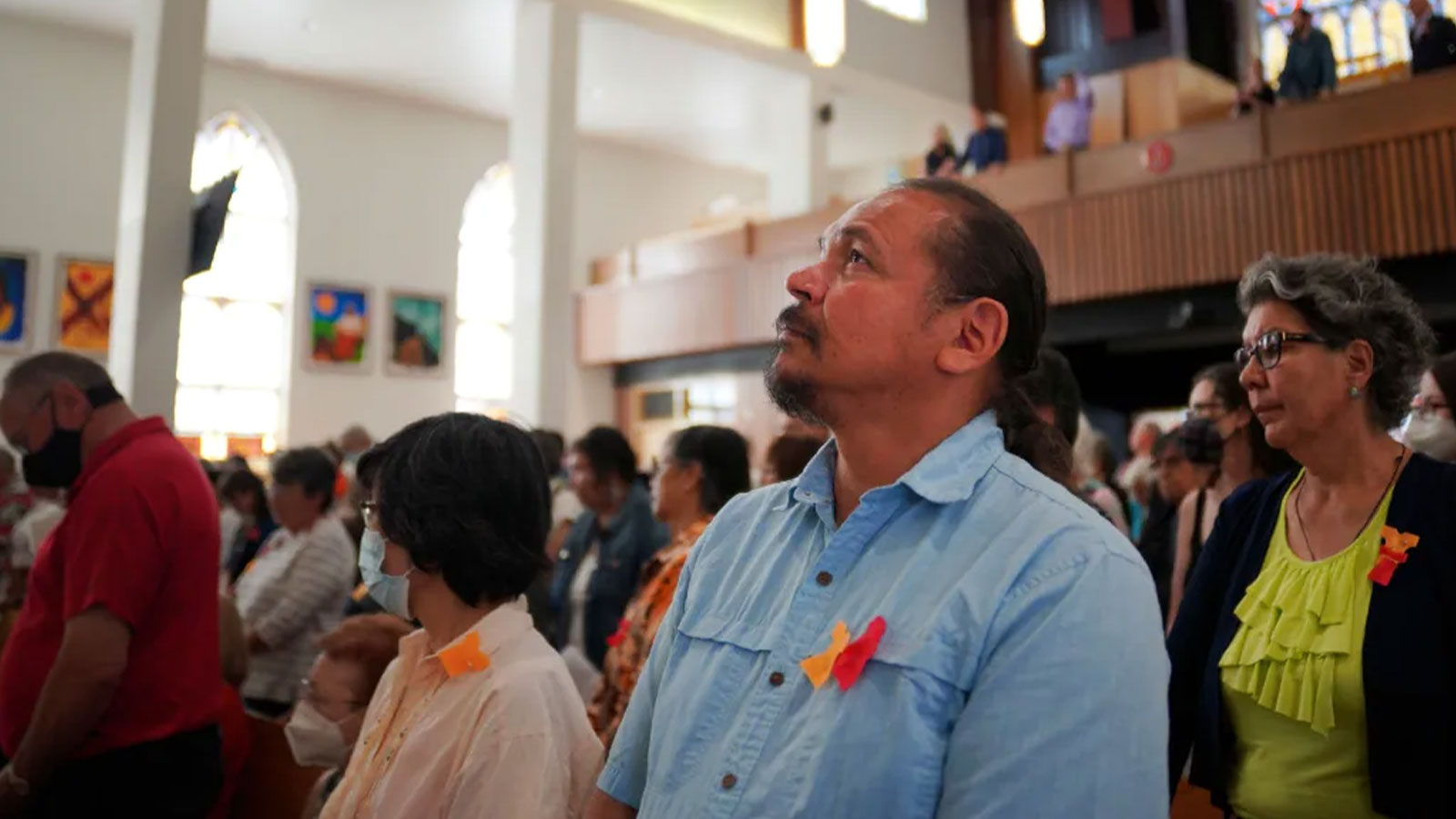 Parishioners attend the rededication ceremony of Sacred Heart Church of the First Peoples in Edmonton. The church was damaged in a fire but has been renovated ahead of Pope Francis’s visit to Alberta. (Jessie Wardarski/The Associated Press)

Faggioli says such a trip was inconceivable even a year ago, when the Canadian bishops and the Pope were still ignoring calls to apologize for the role of the Catholic Church in the abuse of Indigenous children in residential schools.

But he says Francis, 85, who faces mobility challenges related to his knees and sciatica and has cancelled other trips this summer, understood the grave risk of foregoing this one — as did those advising him.

“Canada and the residential schools represent the most clear example of how the abuse crisis has morphed into something different,” Faggioli said. “It’s no longer sexual abuse by clergy, but it is cultural abuse, abuse of authority, cultural genocide. It’s one big monster of a phenomena.”

And addressing it, he says, is crucial to the Catholic Church’s survival as a moral authority in Canada.

Still, the six-day trip to Edmonton, Quebec City and Iqaluit is fraught with political risk for the Vatican and Canadian bishops.

Pope Francis will be arriving in Canada and some survivors are hoping for an apology for the Roman Catholic Church’s role in abuses suffered at residential schools. From resources for healing to returning Indigenous artifacts, First Nations, Métis and Inuit leaders explain what the visit and apology mean for reconciliation.

Vatican observers say the institution’s upper members worry about how to walk the fine line between making more honest acknowledgements for their systemic responsibility in the abuse while keeping the abuse in historic context.

And, observers say, the Indigenous groups in Canada have been less easily appeased than other groups that Catholic leaders have issued apologies to in the past.

In late March, a delegation of Indigenous leaders, residential school survivors and elders met with Pope Francis at the Vatican where some called for him to rescind the Doctrine of Discovery, a 15th-century papal edict that justified the colonization, conversion and enslavement of non-Christians and the seizure of their lands – and, Indigenous leaders say, influenced the Canadian Indian Act.

There have also been demands for the Vatican Museums to return Indigenous artifacts and art — from a human face mask from Haida Gwaii to a rare kayak from Inuvialuit in the western Arctic. Many of the items were given to the Vatican a century ago, but Indigenous delegates question how voluntary the gifts were, given the power imbalance at that time.

Vatican spokesperson Matteo Bruni did not rule out the possible return of the artifacts during or after the Pope’s trip.

“We’ll see what happens in the next few days,” he said this week. “But there may be time and space after the trip for the museums and Indigenous communities to be in touch.” 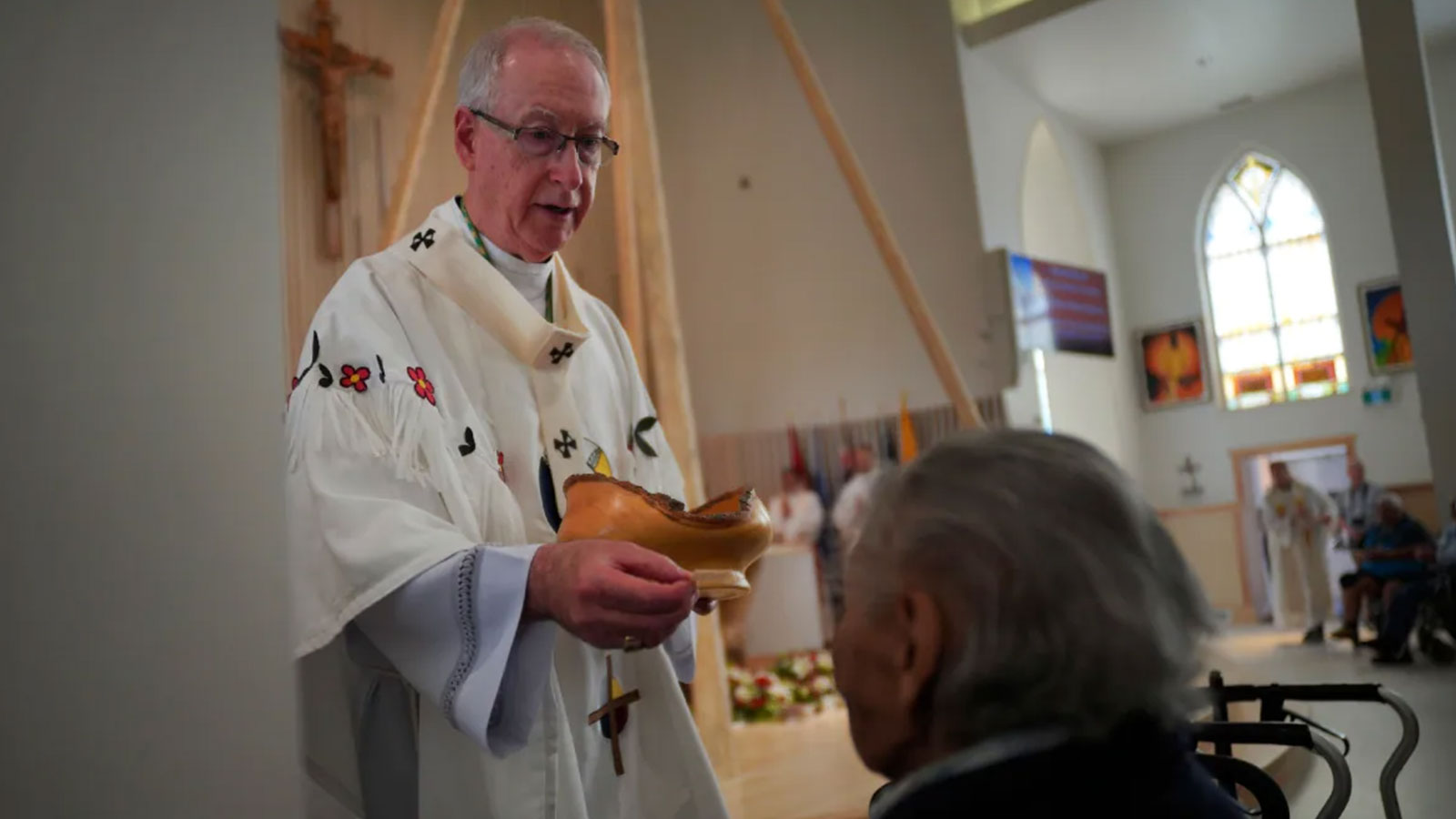 Edmonton Archbishop Richard Smith gives communion during the rededication ceremony and Sunday Mass at Sacred Heart Church of the First Peoples earlier this week. The Pope will be visiting Edmonton during his visit next week. (Jessie Wardarski/The Associated Press)

But Vatican observers say that while the demand to revoke the Doctrine of Discovery is understandable, it’s highly unlikely the Pope will do so, given the decree was superseded by another with the opposite message in the late 1800s.

“Those [decrees] are no longer law in the church,” said Antonio Hofmeister, a Brazilian priest who lived for three years in Edmonton and works at the Vatican. “They’re not part of the doctrine of the church because other doctrines were issued after — which say there’s nothing that can justify colonialism.”

Despite possible dissatisfaction on behalf of Indigenous groups, observers say the Pope’s trip to Canada is remarkable for its exclusive focus on repairing harm done by the Catholic Church to Indigenous communities.

Pope Francis spoke before an audience of 200 bishops, Indigenous delegates and supporters, delivering an apology for the conduct of some members of the Catholic Church in Canada’s residential school system.

Other popes have issued apologies during trips abroad — John Paul II did so for Catholic antisemitism when he visited Germany, the Auschwitz concentration camp in Poland and the Yad Vashem – World Holocaust Remembrance Center in Israel. But, Faggioli says, those apologies were part of a larger trip and were conveyed with a measure of self-congratulation.

“Those speeches came with the papacy acknowledging how far we have come in relations with non-Catholics … So it was a celebration of accomplishments together with acknowledgment of past mistakes,” he said.

No such celebratory messages are likely to be uttered on this trip, he says, a view shared by Canadian Cardinal Michael Czerny, who will be part of the Pope’s entourage in Canada.

“This is a very specific situation. It is partly in response to the TRC’s [Truth and Reconciliation Commission] demand for an apology by the head of the Catholic Church,” said Czerny. “By accepting [its] negative evaluation of the apologies already issued by some Catholic entities in Canada, and by acquiescing to the demand for his personal involvement, Pope Francis is showing humility.”

What a personal visit means

The TRC report, released in 2015, denounced the schools — more than half of which were run by the Catholic Church — as part of a policy of cultural genocide of Indigenous people and included among their 94 recommendations for healing was a formal apology by the head of the Catholic Church.

Prime Minister Justin Trudeau made a separate request for a papal apology in 2017. The Pope turned down the request at the time, a decision defended by the Canadian Conference of Catholic Bishops, who said the Catholic leader recognized injustices faced by Indigenous peoples but could not personally apologize for residential schools.

When in 2021 First Nations announced they had located what are believed to be unmarked graves on the grounds of numerous former residential schools, pressure grew for the both Canadian Catholic bishops and the Pope to issue formal apologies.

Still, Czerny says this trip goes beyond the apology Francis made at the Vatican to the visiting First Nations, Métis and Inuit delegations, when on April 1 he asked for forgiveness for “the deplorable conduct of these members of the Catholic Church.”

“It is the going in person, at great personal effort,” he said, referring to the Pope’s mobility challenges due to knee problems and sciatica. “Sitting together, listening, praying together, going deeper …. True reconciliation requires time [and] attending not just to words but to gestures.”

Featured image: Traditional handmade snowshoes are presented to Pope Francis by Adrian Gunner, from the Assembly of First Nations delegation in the spring when First Nations, Inuit and Métis visited the Vatican to discuss the harm caused by residential schools. The Pope is expected to make another, potentially broader, apology during his visit to Indigenous communities in Canada next week.