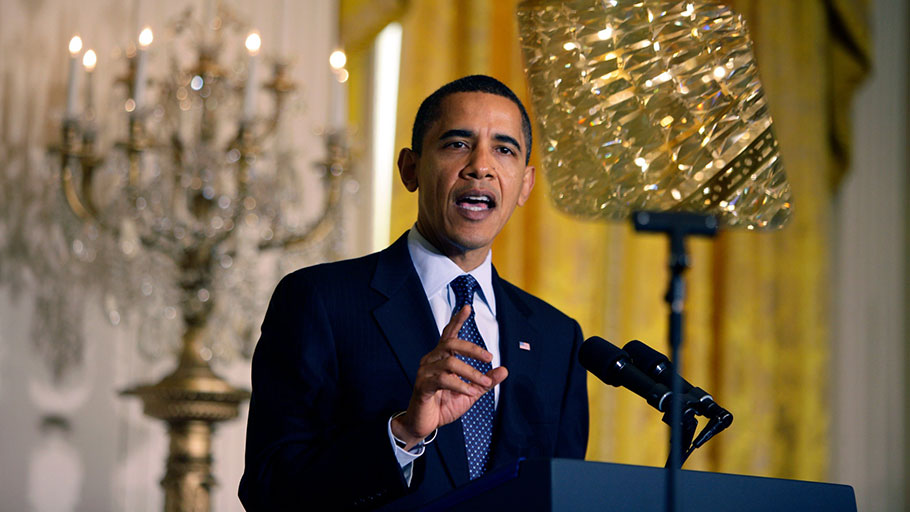 In the early days of his presidency, Barack Obama had the power to overhaul the economy, but instead he focused on smaller, less effective fixes. Photo by Doug Mills, The New York Times.

It rhymes with ‘schneo-liberalism.’ It was an economic disaster and a political dead end.

In 2009, Barack Obama was the most powerful newly elected American president in a generation. Democrats controlled the House and, for about five months in the second half of the year, they enjoyed a filibuster-proof, 60-vote majority in the Senate. For the first six months of his presidency, Obama had an approval rating in the 60s.

Democrats also had a once-in-a-lifetime political opportunity presented by a careening global crisis. Across the country, people were losing jobs and homes in numbers not seen since World War II. Just as in the 1930s, the Republican Party’s economic policies were widely thought to have caused the crisis, and Obama and his fellow Democrats were swept into office on a throw-the-bums-out wave.

If he’d been in the mood to press the case, Obama might have found widespread public appetite for the sort of aggressive, interventionist restructuring of the American economy that Franklin D. Roosevelt conjured with the New Deal. One of the inspiring new president’s advisers even hinted that was the plan.

“You never want a serious crisis to go to waste,” Rahm Emanuel, Obama’s chief of staff, said days after the 2008 election.

And then Obama took office. And rather than try for a Rooseveltian home run, he bunted: Instead of pushing for an aggressive stimulus to rapidly expand employment and long-term structural reforms in how the economy worked, Obama and his team responded to the recession with a set of smaller emergency measures designed to fix the immediate collapse of financial markets. They succeeded: The recession didn’t turn into a depression, markets were stabilized, and the United States began a period of long, slow growth.

But they could have done so much more. By the time Obama took office, job losses had accelerated so quickly that his advisers calculated the country would need $1.7 trillion in additional spending to get back to full employment. A handful of advisers favored a very large government stimulus of $1.2 trillion; some outside economists — Paul Krugman, Joseph Stiglitz, James Galbraith — also favored going to a trillion.

But Obama’s closest advisers declined to push Congress for anything more than $800 billion, which they projected would reduce unemployment to below 8 percent by the 2010 midterms. They were wrong; the stimulus did reduce job losses, but it was far too small to hit the stated goal — unemployment was 9.8 percent in November 2010.

Obama’s advisers also rejected ideas for large infrastructure projects. They offered a plan to prevent just 1.5 million foreclosures — when, ultimately, 10 million Americans lost their homes. And they declined to push for new leadership on Wall Street, let alone much punishment for the recklessness that led to the crisis.

“He chose an economic recovery plan that benefited educated, well-off people much more than the middle class,” writes Reed Hundt, a Democrat who is a former chairman of the Federal Communications Commission, in his recent history of Obama’s first two years, “A Crisis Wasted.”

A lot of this might be excusable; it was an emergency, and Obama and his team did what they could. But Obama’s longer record on the economy is also coming under fire from the left. The Obama people — many of whom came to the White House from Wall Street and left it for Silicon Valley — seemed entirely too comfortable with the ongoing corporatization of America.

In the Obama years, the government let corporations get bigger and economic power grow more concentrated. Obama’s regulators declined to push antimonopoly measures against Google and Facebook, against airlines and against big food and agriculture companies.

It is true that Obama succeeded in passing a groundbreaking universal health care law. It’s also true that over the course of his presidency, inequality grew, and Obama did little to stop it. While much of the rest of the country struggled to get by, the wealthy got wealthier and multimillionaires and billionaires achieved greater political and cultural power.

What’s the point of returning to this history now, a decade later? Think of it as a cautionary tale — a story that ought to rank at the top of mind for a Democratic electorate that is now choosing between Obama’s vice president and progressives like Bernie Sanders or Elizabeth Warren, who had pushed Obama, during the recovery, to adopt policies with more egalitarian economic effects.

From this distance, the history favors Warren’s approach. As Hundt notes, not only did Obama’s policy ideas produce lackluster economic results (at least in that they failed to hit their stated goals), they failed politically, too. The sluggish recovery in Obama’s first years led to a huge loss for Democrats in the 2010 midterms. Obama was re-elected, but during his time in office, Democrats saw declining national support — and in 2016, of course, they lost the White House to Donald Trump, an outcome that Warren has tied directly to Obama’s early economic decisions.

Why had Obama chosen this elitist path? Another new book, “Goliath: The 100-Year War Between Monopoly Power and Democracy,” by the antimonopoly scholar Matt Stoller, provides a deeply researched answer. It boils down to this: Obama, like Bill Clinton before him, was the product of a Democratic Party that had forgotten its history and legacy. For much of the 20th century, Democrats’ fundamental politics involved fighting against concentrations of economic power in favor of the rights and liberties of ordinary people. “The fight has always been about whether monopolists run our world, or about whether we the people do,” Stoller writes.

But in the 1970s, ’80s and ’90s, as Stoller explains, Democrats altered their economic vision. They abandoned New Deal and Great Society liberalism in favor of a new dogma that came to be known as neoliberalism — a view of society in which markets and financial instruments, rather than government policy and direct intervention, are seen as the best way to achieve social ends.

Obama’s biggest ideas were neoliberal: The Affordable Care Act, his greatest domestic policy achievement, improved access to health care by altering private health-insurance markets. Obama aimed to address the climate crisis by setting up a market for carbon, and his plan for improving education focused on technocratic, standards-based reform. Even Obama’s historical icons were neoliberal — the neoliberals’ patron saint being Alexander Hamilton, the elitist, banker-friendly founding father who would be transformed, in Obama’s neoliberal Camelot, into a beloved immigrant striver with very good flow.

It is tricky to criticize Obama from the left in the Trump era. There’s still widespread nostalgia and good feeling for Obama as a political figure — and, considering the disaster of the current administration, it feels almost churlish to re-examine his years in office. There are also a range of good defenses for Obama’s policies. “I have no doubt that when historians look back on the Obama years, he will and should be given credit for preventing a second Great Depression,” Christina Romer, one of the advisers who had pushed for much greater stimulus, told me.

Obama’s policies were also perfectly in line with prevailing orthodoxy — it’s likely that Hillary Clinton would have pursued similar measures if she’d won the 2008 primary. It is also worth noting that, ahem, parts of the punditocracy shared his market-fetishizing philosophy: I wrote skeptically of antitrust prosecution against Google in 2009, 2010, and 2015.

But that’s exactly why I found Stoller’s book so insightful. The long history of Democratic populism is unknown to most liberals today. Only now, in the age of Sanders and Warren and Alexandria Ocasio-Cortez, are we beginning to relearn the lessons of the past. For at least three decades, neoliberalism has brought the left economic half-measures and political despair. It’s time to demand more.