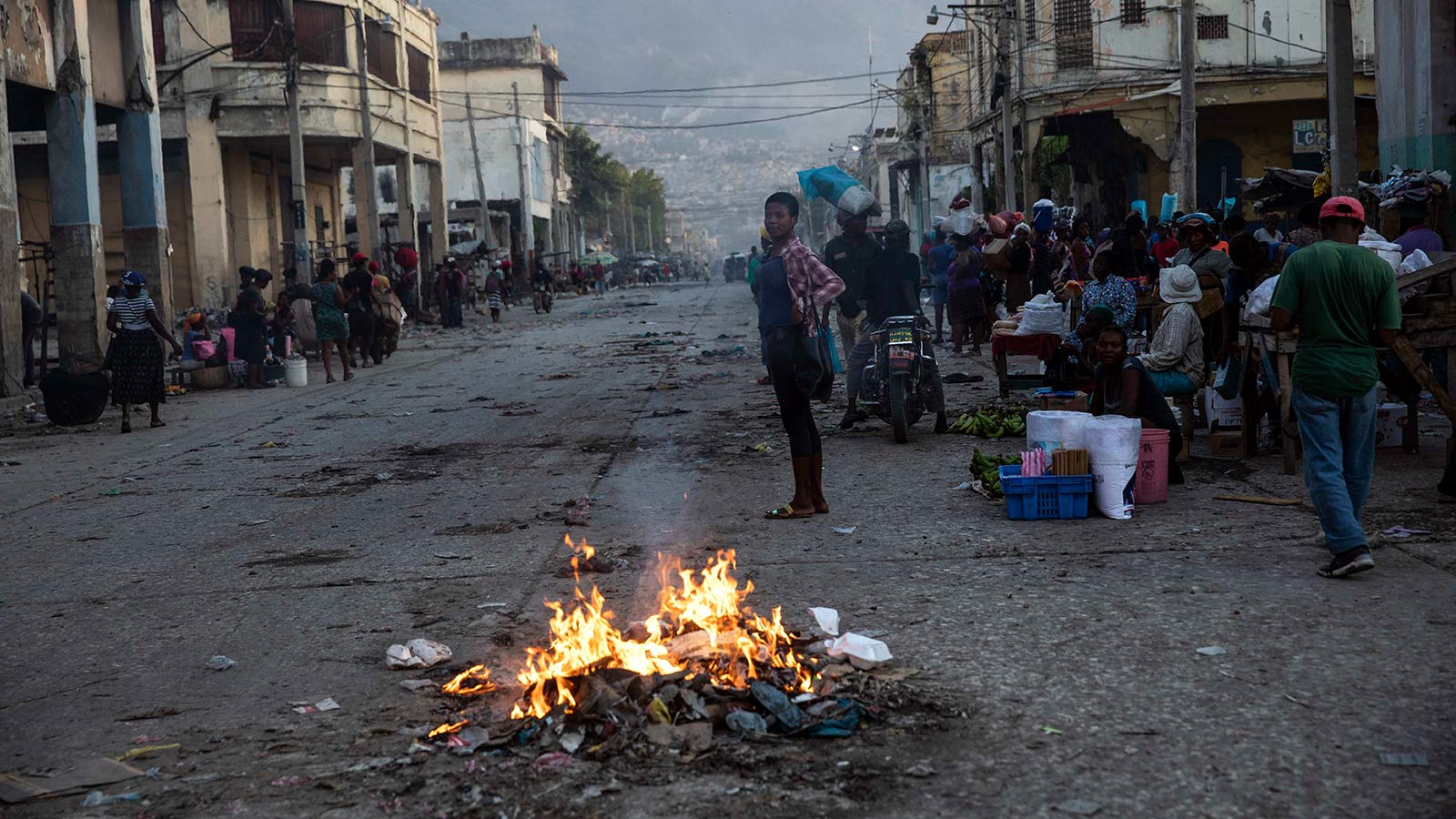 Baseball has a debt to Haiti, and it’s time the sport repaid it

You Are Here: Home » Blog » Commentaries/Opinions » Baseball has a debt to Haiti, and it’s time the sport repaid it

The sport can’t save Haiti, but it has a moral obligation to help a country rendered so hapless by all manner of catastrophe.

But with the sudden and shocking arrival at the Texas border of thousands of Haitians fleeing murder, mayhem and utter misfortune in their Caribbean home — who must outrun Border Patrol agents on horseback doing their best impersonation of 19th century slave catchers — I was reminded of how baseball was once of some small help to a country rendered so hapless by all manner of catastrophe.

It has been 30 years now. And not coincidentally, that was when the last horrific mass Haitian refugee crisis erupted. That exodus was spurred by violence as well in the overthrow of Haiti’s first democratically elected president, Jean-Bertrand Aristide. He was inaugurated Feb. 7, 1991, but was overthrown just 7½ months later by the military.

“Within six months of the coup,” the Organization of American States reported, “the U.S. Coast Guard had intercepted more than 38,000 Haitians at sea; 10,747 were eventually allowed to pursue asylum claims in the U.S. following screening by immigration officials on board ships or at the U.S. naval base at Guantánamo Bay. An estimated 10 percent of the population of Port-au-Prince and Haiti’s other large cities fled into the mountains, generating an internally displaced population of perhaps 300,000. A further 30,000 crossed into the Dominican Republic.”

Baseball fled Haiti then, too.

Haiti is the Western half of the Isle of Hispaniola, the first stop of the African holocaust known as the transatlantic slave trade. The Dominican Republic makes up the island’s Eastern portion. Haiti, the Western Hemisphere’s first republic governed by descendants of Africa, who freed themselves from slavery, is a tragic consequence of French enslavers. The Spanish-speaking Dominican is a byproduct of a brief alignment with the Spanish crown. But for most of the last half of the 20th century, both were concatenated by baseball. Once a giant sugar cane plantation, Hispaniola became a giant baseball industry plantation, with human capital harvested from the East and baseballs assembled in the West.

Dominicans started playing baseball in the late 1870s, when Cubans fleeing a war of independence from Spain arrived ashore with the game they learned from American sailors and time spent in the United States. They birthed a pro league in 1890. And when Major League Baseball reintegrated, the Dominican started exporting players to the states. Ozzie Virgil Sr. was the first Dominican major leaguer. Then came the Alou brothers and Hall of Fame pitcher Juan Marichal in the ’60s. Speedy five-tool all-star Cesar Cedeno arrived in the ’70s. American League MVP George Bell starred in the ’80s. Slugger Sammy Sosa erupted in the ’90s, along with three-time Cy Young winner and Hall of Famer Pedro Martínez. Future Hall of Famer Albert Pujols debuted in 2001. No foreign country has more major leaguers than the Dominican Republic.

And Haiti started exporting baseballs to the United States, and eventually the major leagues, not long after the Alou brothers and Marichal cracked major league rosters. A Tennessee company, Worth Inc., started manufacturing baseballs and softballs in Haiti in 1965. Rawlings opened its first plant in Haiti in 1969. It ultimately acquired Worth.

By the ’70s, Haiti was the biggest manufacturer and exporter of baseballs in the world. Rawlings became the official maker of major league baseballs in 1977. Spalding and Wilson followed Rawlings and Worth to Haiti. A country that didn’t play baseball was making 20 million baseballs per year. By 1979, 90 percent of all baseballs were made in Port-au-Prince, The Washington Post reported, while the Commerce Department reported that in 1983 the United States imported from Haiti $33.2 million worth of balls, mostly baseballs.

What attracted baseball manufacturers to the poorest country in the Western Hemisphere was, of course, that it was just that: poor. Its labor could be paid very cheaply, i.e. exploited. The New York Times reported in 1971: “Virginia Pierre has worked for Tomar Industries, one of the nine baseball plants in this capital city [Port-au-Prince] of 240,000. She is the most productive of the 200 women who work simultaneously at identical benches. The average woman turns out 3½ dozen baseballs a day and earns $1.40 to $1.50, an average of 3 to 3½ cents per ball.”

But even that little remuneration started to dry up in 1990 when Rawlings shuttered its plant in Haiti, citing political unrest. It moved its baseball manufacturing to Costa Rica. One thousand Haitians became unemployed. Then came the coup in 1991. And slowly, other baseball factories followed Rawlings to Central America.

Haitians fled, too. Anywhere. For safety. For a modicum of economic sustenance. For the same reasons they started showing up on the border last week.

But reactionaries in the increasingly retrograde state of Texas, particularly Sen. Ted Cruz (R) and Gov. Greg Abbott (R), blamed the Biden administration for Haitians massing on the U.S.-Mexico border. Just as they blamed the Obama administration for the migrant Mexican and Central American families that crowded the southern border during the Trump administration.

This is a humanitarian crisis. If there are any politics to do with it, they have not to do with party but with the economic terms of trade that have created such despair that people dare to drag themselves, their children, their babies, hundreds of miles through treacherous environments for a chance to survive, chasing the sort of scanty security an exploitative job stitching together baseballs may have provided for a generation and a half.

After the 2010 earthquake that killed upward of 300,000 in Haiti, baseball donated $1 million to the country’s relief effort, and the players’ association pledged as much.

Baseball revealed recently that it was investing in nurturing its game in places such as Europe, India and China. But where the $10 billion ballgame should first invest overseas is where it is not only needed, but indebted: Haiti.

As the late scholar and journalist Jean Damu, once of the University of New Mexico’s Black studies department, observed after baseball dropped its check into Haiti earthquake relief: “Though MLB in alliance with Rawlings Sporting Goods conspired to help destabilize Haiti after the overthrow of dictator Jean Claude ‘Baby Doc’ Duvalier in the late 1980s and moved their baseball factories to Costa Rica, throwing thousands of Haitian women out of work, the professional sports organization should acknowledge [its] long, exploitative relationship with the devastated nation and make a much more significant donation to help rebuild the nation from which it made so much money.”

He wasn’t alone in that sentiment. Around the same time, Josh DeWind, a co-author of “Aiding Migration: The Impact of International Development Assistance on Haiti,” told the New York Times: “Do they [baseball manufacturers] have an obligation? I suppose they did quite well in Haiti, so, yes, in a humanitarian sense, it would be morally right to go back and help out, given that they benefited from Haiti.”

Those were relevant observations then. Sadly, they remain so right now.

Kevin B. Blackistone, ESPN panelist and professor of the practice at the Philip Merrill College of Journalism at the University of Maryland, writes sports commentary for The Washington Post.
Source: Washington Post
Featured Image: People gather around burning garbage in downtown Port-au-Prince, Haiti. (Rodrigo Abd/AP)